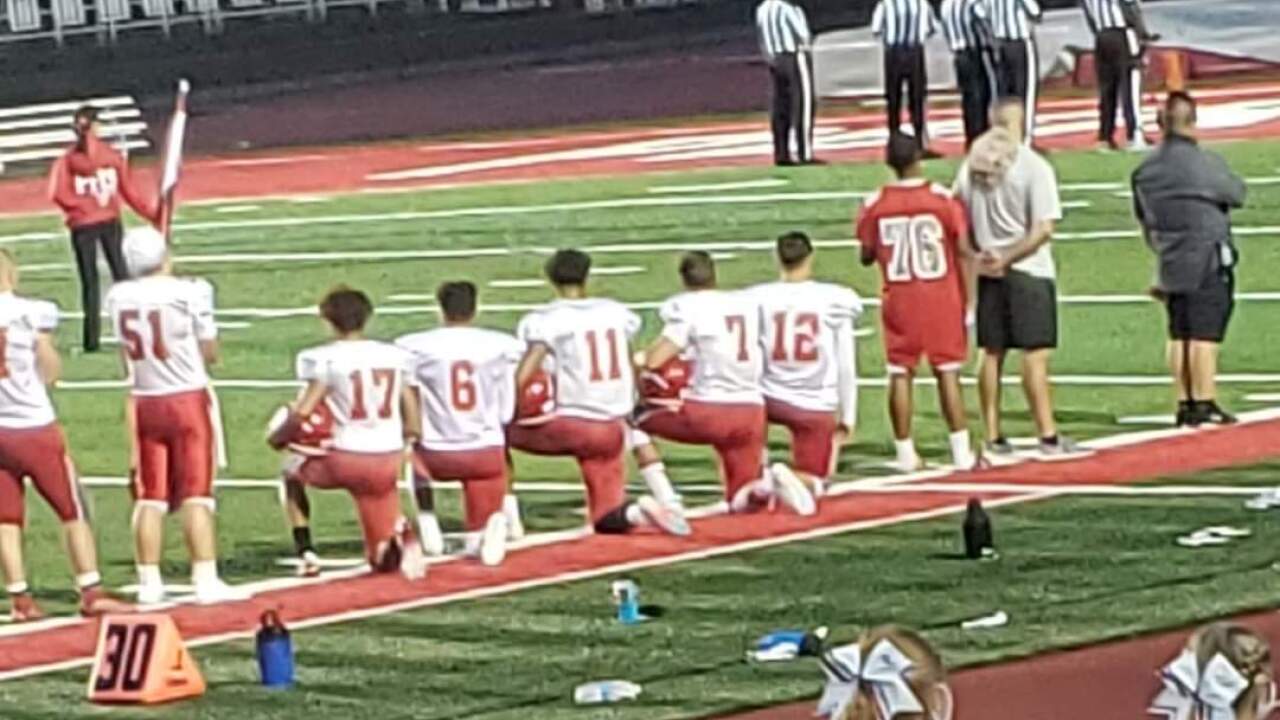 Provided by Jessica Malinkey
PHOTO: Izaiah Harris and four of his teammates kneeled before a football game, during the national anthem.

ASHTABULA, Ohio — The Cleveland Division of the FBI – Painesville Resident Agency and the United States Attorneys Office – Northern District of Ohio announced Friday afternoon that they had arrested Bryan Shane Wolfe, 44, of Mansfield, Ohio, in connection with a threatening social media message.

Wolfe was charged with Interstate Threatening Communications and was taken into custody Friday morning before an expected appearance in court the same afternoon.

Jessica Malinkey of Ashtabula said she was the recipient of that hateful Facebook message, sent last Sunday afternoon.

On Sept. 13, Malinkey received a direct message from an account by the name of shane.wolfe.7758. The message included a photo of her 16-year-old son and 6-year-old daughter, who are both biracial, the FBI said.

“Randomly, Sunday afternoon, 4:22 p.m., I got a Facebook message that said some pretty vulgar things, along with the picture of both my children in their uniforms,” Malinkey said. “The wording, he said ‘he.’ So that's why I feel like he's more targeting my son.”

Malinkey’s son, Izaiah Harris, is a junior at Edgewood High School, where he plays on the football team. Malinkey said her son had his first encounter with racism this summer, and when the football season began, he knew how he wanted to share a message and show support for racial justice.

“They've been kneeling at football games since it started three weeks ago,” Malinkey said of Izaiah and four of his teammates.

The school district, Buckeye Local Schools, put out this statement to the community after receiving comments about the students kneeling, provided to News 5 by the superintendent:

At last week's football game against Perry some of our Buckeye student athletes chose to take a knee during the national anthem to express their views. Since that time, we have heard from community members who wholeheartedly support these students in their decision to kneel, and from other community members who are vehemently opposed to the decision. We understand there are very strong beliefs on both sides of this issue, both in our community, but also nationwide. As a public school district, it is not our role to pick a side, but rather focus on our responsibility to support all students.

While it has been a tradition at football games for student athletes and spectators to stand in honor of the national anthem, we must also protect the constitutional rights of students and the freedom to peacefully express themselves and not participate in that tradition.

While not all people share these students' point of view, as a school district we support all our students - whatever their views - who are seeking to express themselves constructively and responsibly. We remain keenly aware of our role to help all students navigate these difficult conversations through civil discourse that can often be challenging for us all, and we are proud of all our students who are learning these important lessons.

With tonight's football game approaching, we want to remind our community that as a district, we are far stronger when we show our students that people can hold different beliefs but, at the end of the day, still care for each other and unite around common goals. And tonight, our common goal is to support the football team and cheer them on to honor the hard work and dedication of the entire team! We are thrilled to have our team back on the field tonight!

Malinkey said that with people “commenting some terrible things, calling them terrible names,” she cautioned her son to avoid kneeling on Sept. 11 because of what happened that day.

“I said, ‘I don't think it's a good idea for you to kneel. Maybe you should just lock arms,’” Malinkey said. “And he said, ‘OK, Mom.’ And that's what he did. And then when I spoke to him about it, he said, ‘Mom, I wasn't going to kneel anyways, because I thought it would have been weird with what day it was.’”

Just a few days later, Malinkey received the hateful, vulgar Facebook message. She said she wasn’t sure whether it stemmed from Izaiah’s kneeling or not, but she described it as “painful.” The FBI described the message, which contained racial slurs.

According to the FBI, the text of the message sent along with the photo of the children read: “And it is why you and your n***** will swing from knots….you’re bleeding watching it all.”

“My children, they're very respectful children, they’re good kids,” Malinkey said. “Everyone that knows my son knows he's a great kid, has nothing but good things to say about him, so for someone to say something about someone they know nothing about, it’s very hurtful.”

Malinkey said her son walked in on her crying with her phone in her hand and asked what was going on.

“He's not a very vocal child. He keeps things to himself, so he didn't really say anything at first,” Malinkey said. “But then the next day I spoke to him and I said, ‘You know, people are reaching out to me. If you want me to just leave it alone...’”

But, Malinkey said, Izaiah responded, “No, Mom. This is the reason why we’re kneeling.”

He encouraged her to do what she needed to do and said he was on board with it. However, Malinkey said her son had an anxiety attack that night.

The message was reported to authorities and an investigation was initiated.

An authorized request for subscriber information was submitted and the results indicated the owner of the account that sent Malinkey the threatening message belonged to Wolfe. The internet protocol address indicated Wolfe’s residence being logged into the social media account at the time the message was sent, according to the FBI.

The FBI’s announcement Friday that Wolfe had been arrested in connection with the message was welcome news for Malinkey, who said she was happy, her son was relieved and that they could breathe now and stop jumping at every sound.

Liz Penna, president of the Ashtabula Branch of the NAACP, said the family did nothing wrong and didn’t deserve this. She was glad Ashtabula police and the FBI took the threat seriously.

“I feel for the young man, the pain and humiliation and the unfairness of the whole situation,” Penna said.

Penna, who grew up in Ashtabula County and said she was racially discriminated against from the time she started kindergarten, said she was very angry and hurt hearing about the messages Malinkey and her son received.

“I could not believe that this type of behavior was being so blatant here in Ashtabula County and that somebody would reach out and to do this to a young man who's working hard to be a good student and a good person and then to threaten his mother and his family like that,” Penna said. “It is just so, so wrong.”

She said the community, the police department, the schools and churches are “very aware of what’s been going on” and that she’s “had nothing but positive outreach.” She hopes people will come out of this situation with more compassion and understanding.

“We are living in very rough and troubled times right now, and there's so much stuff being stirred up that we need to remember who we are as people and respect each other as people,” Penna said.

She added, “What I would like people to take away from this is to remember that we are all human. We are all from the same place. We all come from the same place. We all work together. We all suffer together. No one is above another person. Everybody's burden is the next person's burdens, and we need to learn to love one another and to show more compassion and understanding.”

The district's superintendent told News 5 by phone Friday that, "as a school district, we will not tolerate any type of racial threats of that nature at school or any school events." The superintendent said the man charged with sending the message was unknown to the district.

For Malinkey, despite all that’s happened, she and her son will continue to share one clear message.

“Racism is real and people need to open their eyes and see that it's happening,” Malinkey said. “And I'm very proud of my son for taking a stand for what he believes in, and I support him 100%.”