Northeast Ohio received a D+ grade for its overall infrastructure in an annual report card from the American Society of Civil Engineers, which was released Wednesday.

CLEVELAND — Northeast Ohio received a D+ grade for its overall infrastructure in an annual report card from the American Society of Civil Engineers, which was released Wednesday.

The report card gave the following grades for different parts of the infrastructure in Cuyahoga, Geauga, Lake, Lorain and Medina counties: C- for bridges, D+ for dams, C- for drinking water, D for energy, D+ for roads, D for schools and D+ for wastewater. A C ranking is defined as “mediocre, needs attention,” and a D ranking means “poor, at risk.” 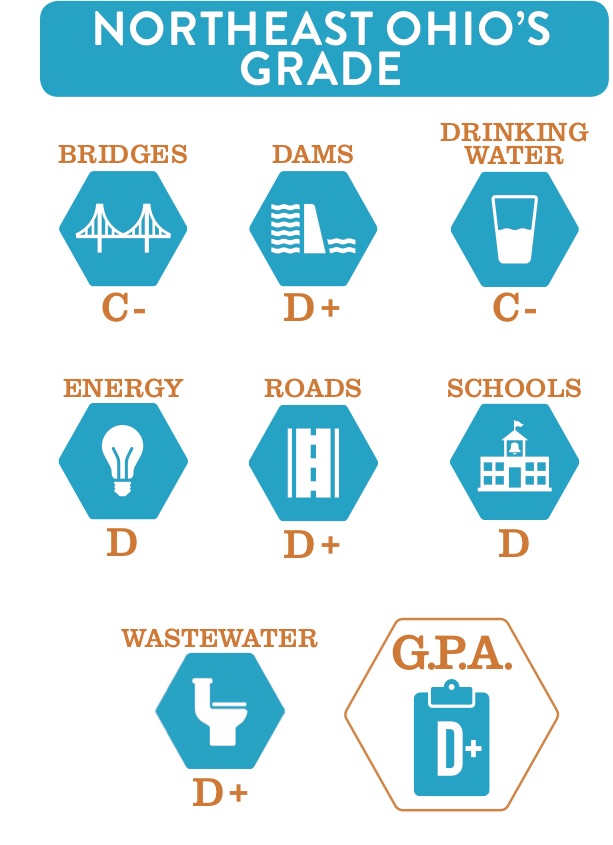 Dreyfuss-Wells added that NEORSD has done a wonderful job maintaining what they have.

"We have a lot, it is old, and we need to keep maintaining it," she said.

Ed Adamczyk, the report's author, said it is an investment cities have to make.

"There’s a cost to improved infrastructure," he said. "Nothing is free. and these projects we talk about are expensive projects, but they yield tremendous benefits in life, convenience and safety."

Schools received the lowest grade, with the report pointing out that 52 percent of the region's schools have not seen significant renovations in 40 years.

Adamczyk said the report highlights both problems and progress made by various entities.

The ASCE recommends four steps be taken to improve the infrastructure of the region.

They suggest the state increases gas and diesel taxes to pay for necessary road and bridge projects. The state’s fuel taxes have not increased since 2005, and by 2020, ODOT will face an annual budget shortfall of nearly $1 billion, when compared to what was available in 2014.

The third recommendation is to invest in school facilities and training tomorrow’s workforce. Sufficient funding to repair and replace school facilities is needed, as school infrastructure was one of the lowest-graded categories in the 2019 report.

Finally, the ASCE recommends continued investment in wastewater infrastructure to ensure the health of Lake Erie.

Read the full 67-page report below: