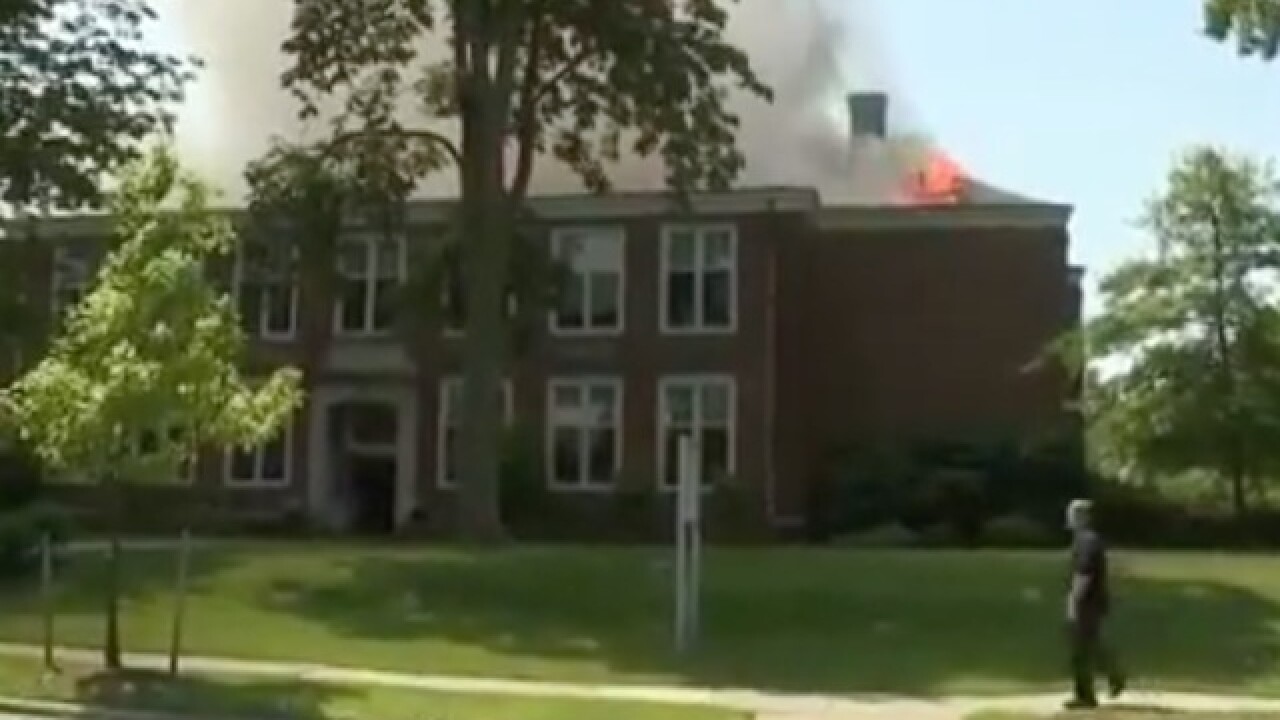 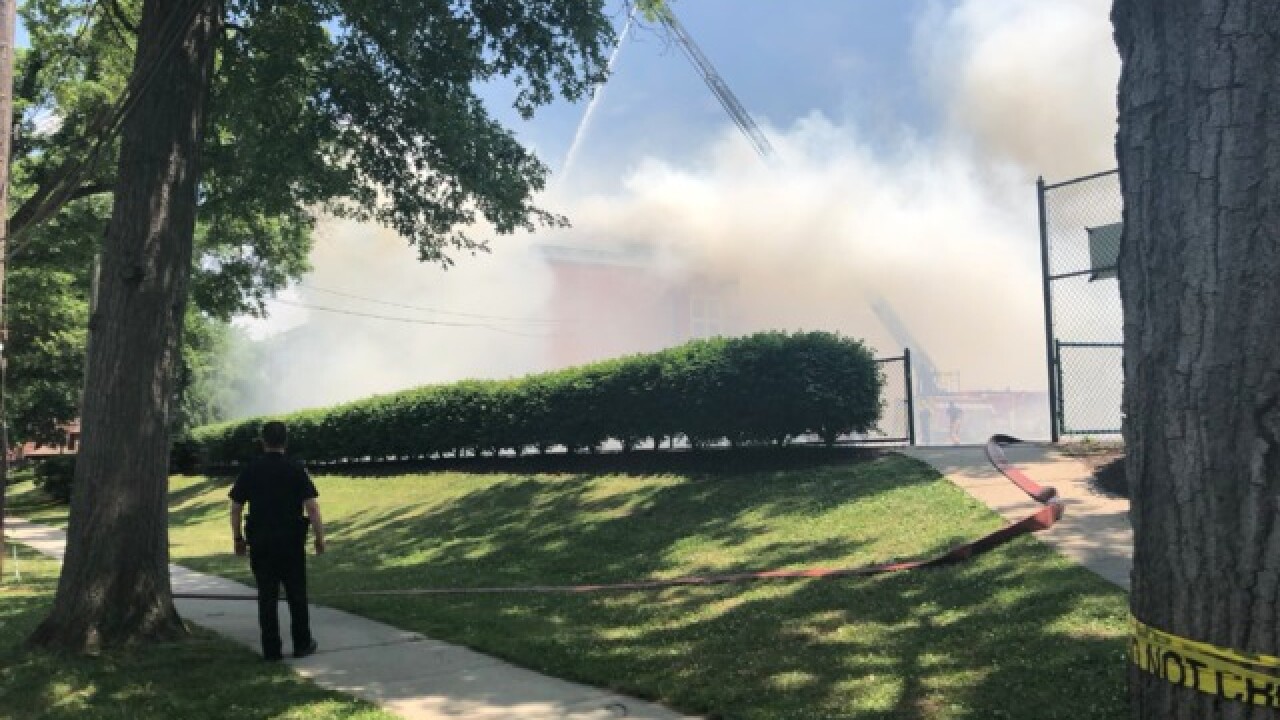 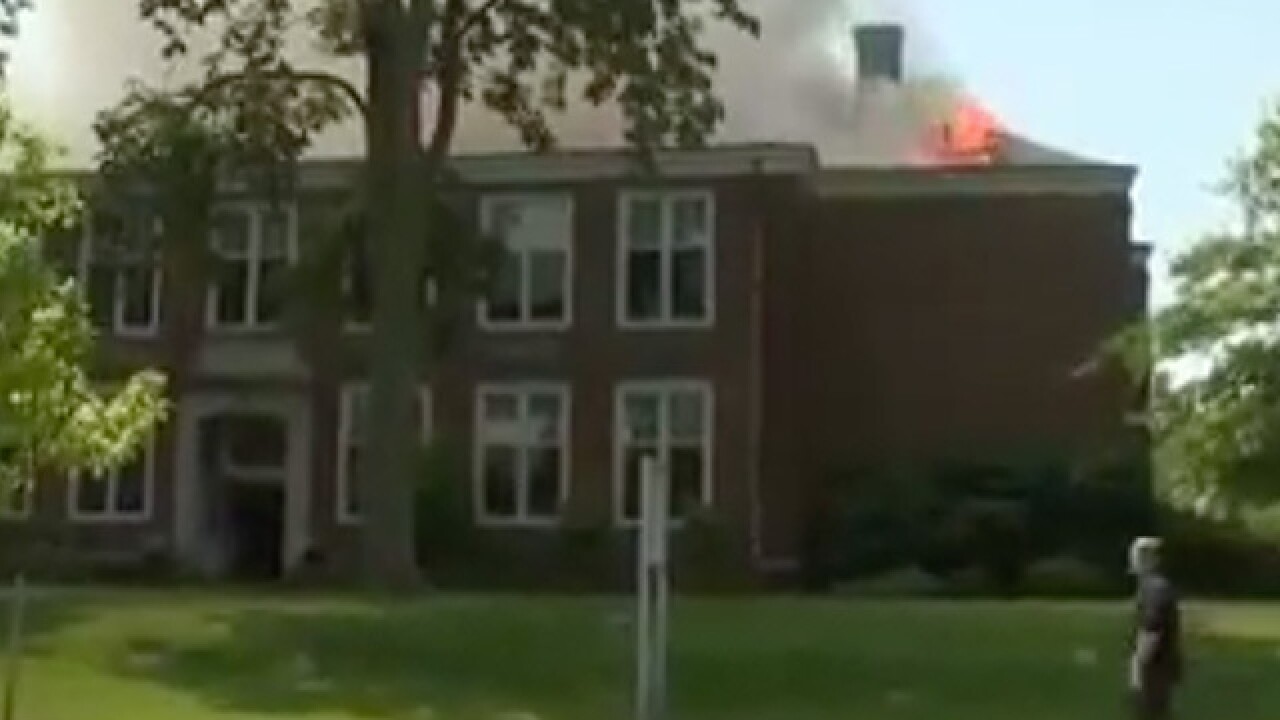 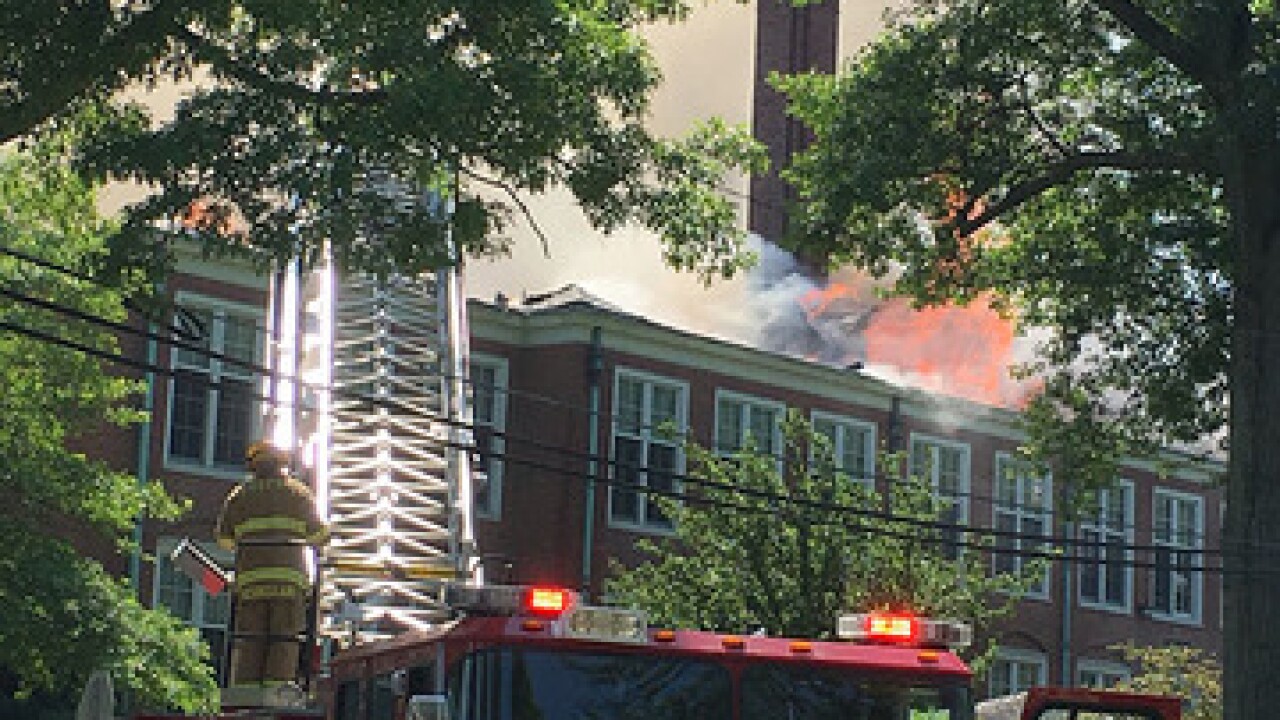 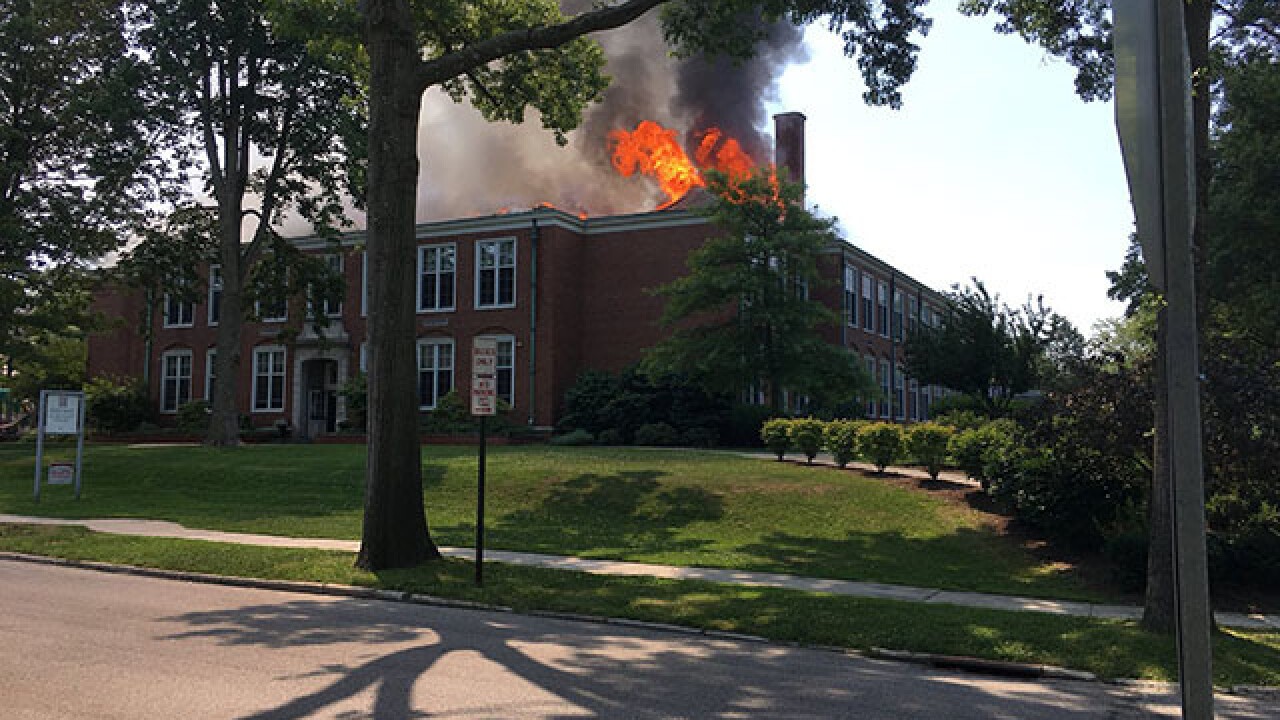 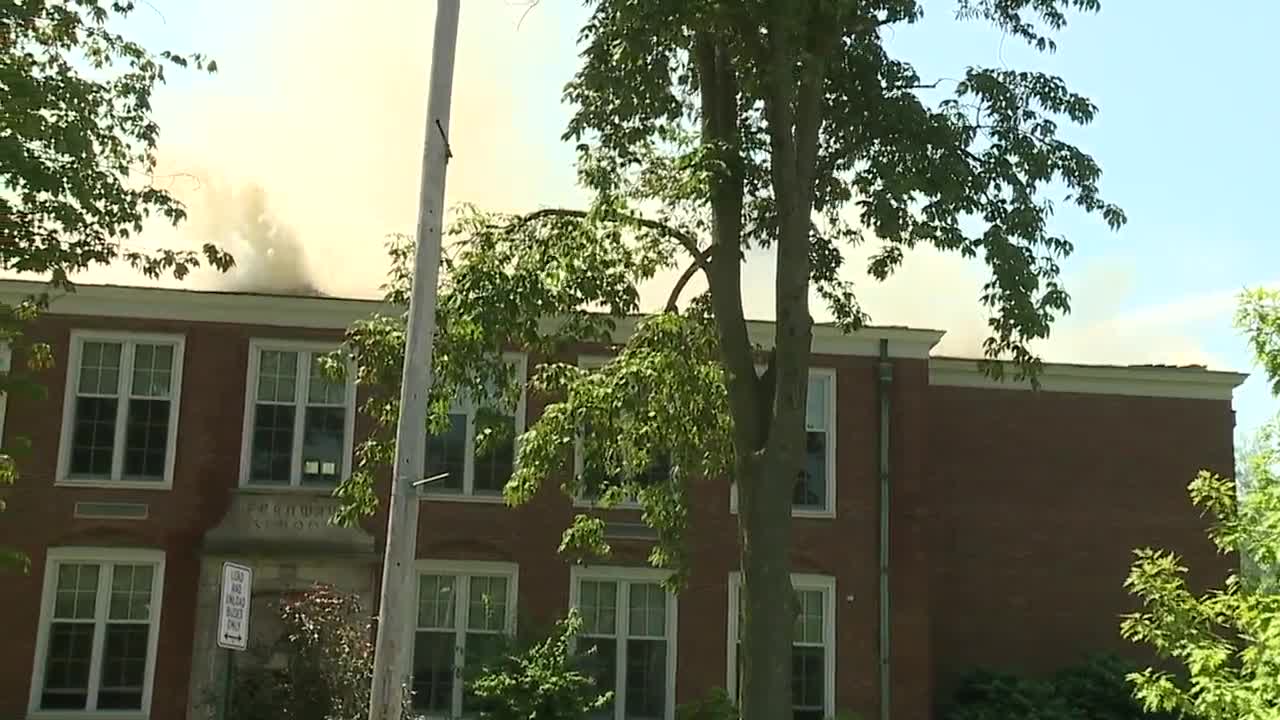 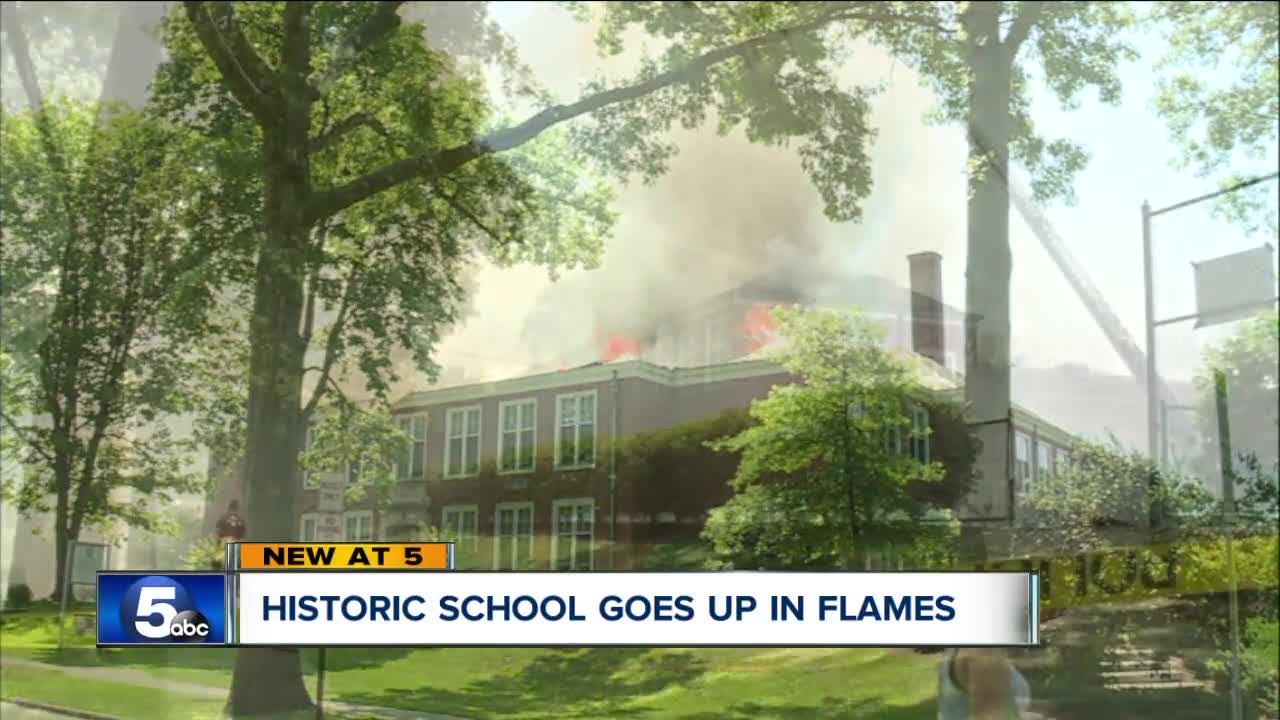 The roof of a Shaker Heights elementary school collapsed hours after a fire broke out at the school Tuesday.

Firefighters still putting out hotspots and a lot of smoke is still emanating from the roof. Fighters were able to quickly get the situation under control. @WEWS pic.twitter.com/8DVddqHRZ5

The fire broke out at the school around 11 a.m. Tuesday. Everyone was evacuated safely from the building, and there were no students inside.

Fernway Road reopened in both directions on Wednesday after officials closed access to the road. The Shaker Heights Police Department is warning drivers to drive with caution in the area as people are expected to drive slowly, braking to look at the damage.

Fire could be seen billowing from the roof of the school as the smoke circulated throughout nearby streets.

There’s still a lot of smoke coming out of the elementary school. Luckily, everyone made it out safely. No children inside. @WEWS pic.twitter.com/pfhUpidrU8

The roof of the building, which was constructed in 1927, gave way shortly after 1 p.m.

The fire has been going on for nearly two hours now. The roof of the building, which was constructed in 1927, has given way. @WEWS pic.twitter.com/N7YS6Sk9bK

The concern about the roof prompted firefighters to take a defensive position. Instead of sending firefighters inside the smoldering structure, crews were forced to rely on their ladder trucks to attack the fire from the air.

"We’re not committing firefighters inside at this second until we know that the collapse potential of the roof is minimized," said Chief Patrick Sweeney. "There was roofing work that was going on but, right now, we haven’t dug into the investigation to see if that would have impacted it. But it’s possible."

The cause of the fire remains under investigation. Dozens of neighbors, teachers and students gathered near the school while firefighters worked to extinguish the blaze. One of them was Matt Zucca, a longtime teacher at Fernway.

"I’ve worked here for almost 19 years. My two daughters go here. It’s just a lot of sadness right now," Zucca said. “[The school is] a member of the community. It’s a family member. It’s hard to see. It’s a building but it’s more than that because of what it’s meant to the community and the people here."

Dear Shaker Community,
The devastating fire at Fernway Elementary School tore at our hearts and left many of us overcome with disbelief. For nearly 100 years, Fernway Elementary has been the epicenter of the neighborhood. It is the safe place for learning, for playing, for coming together.
And it still will be.
Here in Shaker, we know that we are all stronger together. We build relationships with our neighbors. We lend a hand to friends and strangers in need. We believe in the collective strength of our community.
Still, the emotions over the loss of our beloved building are raw. Our first step to moving forward together is to offer grief counseling to those in need. We will be providing these services in the next 24-48 hours.
Shaker Heights Schools is tremendously grateful for the tireless, professional efforts of the Shaker Heights Fire Department, police and other first responders as well as assistance provided by departments as far west as Lakewood and as far east as Eastlake.
To members of the Fernway Community—including Fernway teachers, Fernway Principal Chris Hayward, residents and students—who stepped in with water, food and other supplies to offer support, we offer our deepest gratitude.
The Board of Education and District officials are still assessing the damage and developing plans for next steps. Of course, we will keep the entire Shaker Schools community posted on future plans and will seek out your input and guidance. Whatever those plans, Fernway will remain whole and will continue to thrive as an educational community.
In the days ahead, we ask for your patience and understanding as we work on contingency plans for our students and teachers at Fernway School. As soon as we form a plan, we will host a public meeting and communicate the necessary details. This year will be one for rebuilding in many ways. But when we’ve come through to the other side, we know our community will be just as strong as it has always been.
Sincerely,
Dr. Stephen M. Wilkins
Interim Superintendent
Shaker Heights City School District