One person dead after house explosion in East Cleveland

The East Cleveland Fire Department confirmed one female has died and one male has been injured after a house explosion on the border of Cleveland and East Cleveland early Sunday afternoon leveled one home.

"You could see her waving and all the neighbors started screaming and waving, 'Somebody help her, somebody help her!'" said witness Nena Maria Fitzgerald about the woman who died.

Fitzgerald said police started to help the woman, then put a sheet over her.

"I think they only found like half of her body at the time," Fitzgerald said.

The injured male suffered multiple burn injuries. No firefighters have been injured.

Video from neighbors/witnesses shows no fire in the minutes after the explosion in East Cleveland when people nearby walked down to see what was going on. They say they saw a woman waving for help before police got to her -- later that woman was covered by a sheet. @WEWS

Cleveland police and fire arrived at the scene at 1073 E. 125th Street near Forest Grove before the East Cleveland departments and said four houses were on fire. Cleveland EMS also responded.

Cleveland police said they were originally called for wires down at the location.

Residents in several homes near the explosion were evacuated, but East Cleveland fire officials could not provide an exact number of homes evacuated. In addition to the home that was leveled, two others were badly damaged.

Authorities said the side of the street where the home exploded is East Cleveland. The homes that were damaged across the street are in Cleveland.

News 5's crews on scene said there was a gas odor in the neighborhood when they arrived. Dominion Gas said they were called around 12:55 p.m. regarding the explosion. Dominion crews were sent to the scene and shut off the gas. The company said it has not heard about past gas leaks in the area.

Residents in the area reached out to News 5 and said their houses shook when the explosion happened. Some say their windows were blown out. The East Cleveland and Cleveland Fire Departments confirmed several neighboring houses were heavily damaged.

"I heard a big boom," Terra Market said. "We thought it was like an airplane the way it hit and the way it shook."

Beckham's son was one of the handful of people who were cut by flying debris during the explosion. She said a broken window cut his wrist. When News 5 spoke with her, his blood was still on her shirt.

Sunday's explosion happened less than a mile away from a house explosion that shook another neighborhood on Primrose Avenue about a month ago. 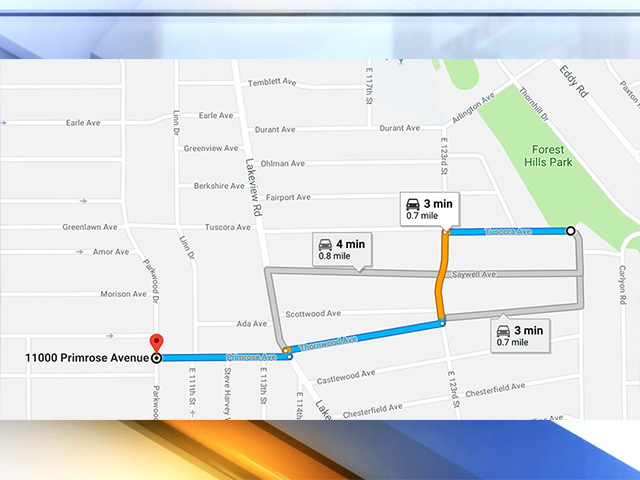 The cause of the explosion is still under investigation. East Cleveland firefighters expect to be on scene for a few more hours and will determine at later time when evacuated residents will be allowed to return to their homes. The area is blocked off and a perimeter has been set up by East Cleveland police.

In an update sent to News 5, Dominion Energy Ohio confirms that after testing the main line and the service line to East 125th Street, both lines checked clear for any leaks.

Dominion Energy crews also checked the main lines and service lines to the surrounding homes in the neighborhood, and again found no leaks. According to authorities these results eliminate any Dominion Energy Ohio facilities as potential factors in the explosion.

Big #UPDATE from Dominion Gas Company: lines at #EastCleveland home explosion were active but no leaks & have eliminated Dominion facilities from being a factor in the explosion. Investigators focusing on inside of the house. House was vacant at the time of the explosion. @WEWS

A spokesperson for Dominion Energy confirms that the home has an active account with the gas company, but was vacant at the time of the fatal explosion.

East Cleveland Police have released the identified the male victim as Craig Kelly, 51 of Cleveland, who remains in critical condition at MetroHealth.