Man convicted of killing a Strongsville teacher inside her own home last year was sentenced to life in prison with a possibility of parole after serving 33 years.

Man convicted of killing a Strongsville teacher inside her own home last year was sentenced to life in prison with a possibility of parole after serving 33 years.

Jeffrey Scullin Jr., 20,  pleaded no contest to all of his charges last week on the day his murder trial was set to begin, court officials confirmed. He was sentenced to 30 years for aggravated murder with three years for a firearm specification.

When asked if he had anything to say, Scullin, who remained unmoved during the sentencing replied "nothing." 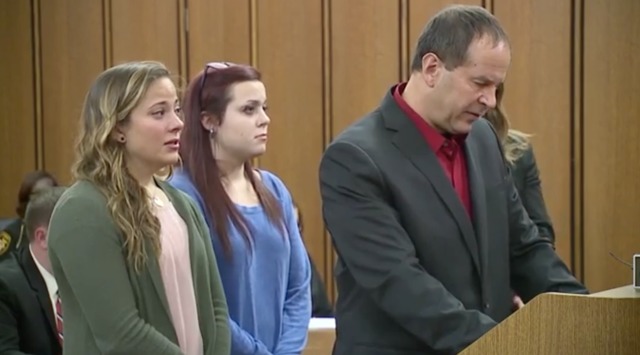 Pictured above from left to right: Megan, Anna and Bruce Pleskovic address the court during sentencing

"The extent of his monstrous actions have forever crippled the lives of everyone he knows.  Melinda will never be coming back, said her daughter Anna Pleskovic.

"Our lives will never be the same because of Jeffrey Scullin. My mother was the face of compassion, love and perseverance and because of him, she is gone," said daughter Megan Pleskovic.

Bruce Pleskovic said this past year has been difficult with the loss of his wife.

"We had a loving, caring normal household. We took Jeffrey in as our own… The lost of Melinda will have a rippling effect on the kids and I forever. My daughters are heartbroken about the loss of their mother who can never be replaced," Bruce Pleskovic said.

Scullin was indicted on charges of aggravated murder, murder, felonious assault, tampering with evidence, making false alarms and endangering children in connection with the death of 49-year-old Melinda Pleskovic.

Pleskovic was a beloved middle school teacher for more than 20 years and was considered a loving wife, mother, grandmother, coach and a friend.

Scullin was one of the people who called 911 when Pleskovic's body was found inside the Blazing Star Drive home on Oct. 23, 2017. He had just returned from dinner at Applebee's with Pleskovic's husband, Bruce. Bruce's daughter — who was engaged to Scullin — worked at the Applebee's and was working that night.

Pleskovic was supposed to meet the family for dinner but never arrived.

Court records show a large tactical knife was found on the back seat of a truck Scullin said he drove the day of the killing. Police said the knife had Melinda's blood on it. DNA belonging to Scullin was on the handle.

Prosecutors say Pleskovic, found in the kitchen of her home, died from more than 30 stab wounds and three gunshot wounds.

Scullin was given credit for serving 363 days. If released on parole, he will be given post-release control with supervision up to three years.