Cleveland's Public Square has become an integral part of the city's culture. It's become a place where workers get a much-needed break from the office and where residents and visitors take in views of the Terminal Tower and other surrounding cultural buildings. It's some of these features that have earned Public Square a spot in the American Planning Association's list of top public places in America.

For decades, it was crossed by major roads, dividing it into smaller squares, but with a major redesign, it's garnered itself as a green gathering place in the center of downtown. 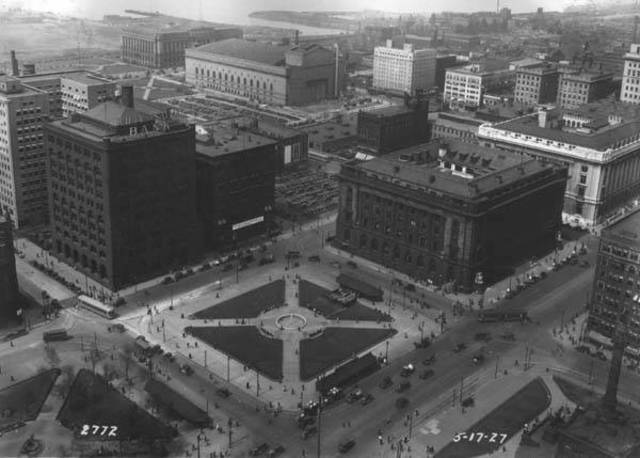 Looking northeast towards Public Square from the 27th floor of the Tower building circa 1927. Photo courtesy of Cleveland Memory Project.

Like many spaces and buildings in Cleveland, Public Square carries a long history. In 1796, it was in the "Original Plan of the Town and Village of Cleaveland" by the Connecticut Land Company, according to Case Western Reserve's Encyclopedia of Cleveland History.

In 1857, Superior and Ontario were closed at Public Square, but that changed in 1867 when the roads reopened to traffic. Public Square hosted numerous historical events, including being the location where the first successful demonstration of electric streetlights on April 29, 1879. It was the location for President Lincoln's funeral in 1865 when horse and carriage took his casket to Monument Park, now known as Public Square. 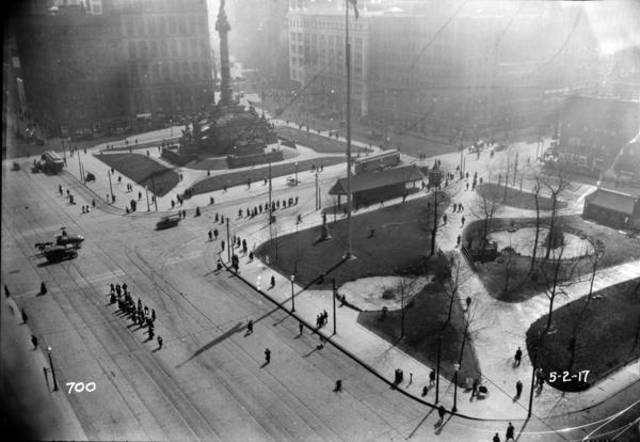 Public Square circa May 5, 1917. Photo Courtesy of Cleveland Memory Project.

Since its redesign, Public Square has become a place for public events and gatherings. Public Square became the place for free speech during the 2016 Republican National Convention. The space has hosted America Ninja Warriors and live broadcasts from news outlets during the NBA championships and World Series.

For those lucky to call Cleveland home, Public Square is just a quick walk or ride away.

Others named in the list of top public places include: