Body of man found buried in backyard of Massillon home

Copyright 2018 Scripps Media, Inc. All rights reserved. This material may not be published, broadcast, rewritten, or redistributed.
Bob Jones

The body of a man was found buried in the backyard of a Massillon home Friday morning.

The Ohio Bureau of Criminal Investigation and Massillon police were at the scene of the home on 8th Street SW for the second time Friday looking for the body.

Police have not released the identity of the man. The remains were taken to the Stark County Coroner's Office.

A backhoe was used to dig up the yard Friday morning.

Coroner Anthony Bertin said the man was found buried 6-feet deep in a large plastic container on wheels. Bertin told News 5 police have a good idea of who the man is, but they are not releasing his name.

Police sources confirm they have persons of interest in the case. They are conducting interviews but no charges have been filed.

The whole situation left neighbors with many questions.

"Who really was that person that did it. Who was actually there? What happened? Did it happen there or did it happen somewhere else? That's what I'm wondering," said Brandon Kemp, who lives on the street.

Relatives of Nick Stein — a man who was reported missing last year — fear the remains belong to him.

His family told News 5 he lived at the house for a few months with a man and a woman but disappeared last February.

Police records show Massillon officers went to the house on Feb. 9 of last year in reference to the missing persons report, but Stein was not there. 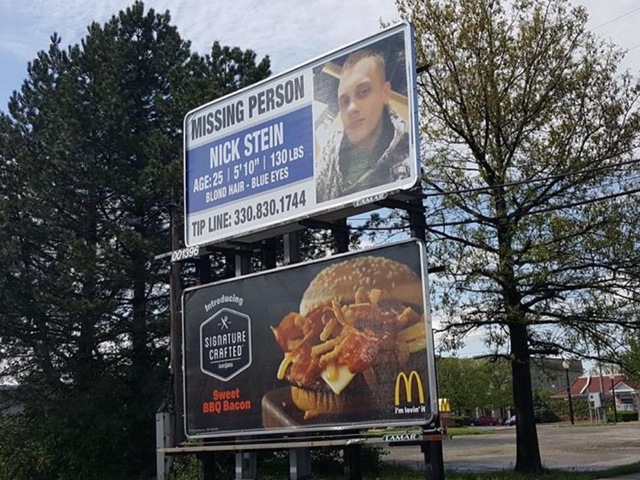 Family friend Paula Cline told News 5 he paid for a billboard and shared his picture thousands of times on social media, hoping to find him.

"I think it's absolutely horrible. I looked for him for a year. I spent hundreds of hours and money looking for him," she said.

Police records also show officers were at the home two weeks ago to serve an active arrest warrant. According to a police report, there were three children, all under the age of 3, found inside the home who were "badly neglected."

"The living conditions of the home were unsafe and unsanitary and children were also abused," the report said.

A dog that was "extremely malnourished" was found in the basement. Police said it also had open wounds. The three children were taken from the home, as was the dog.