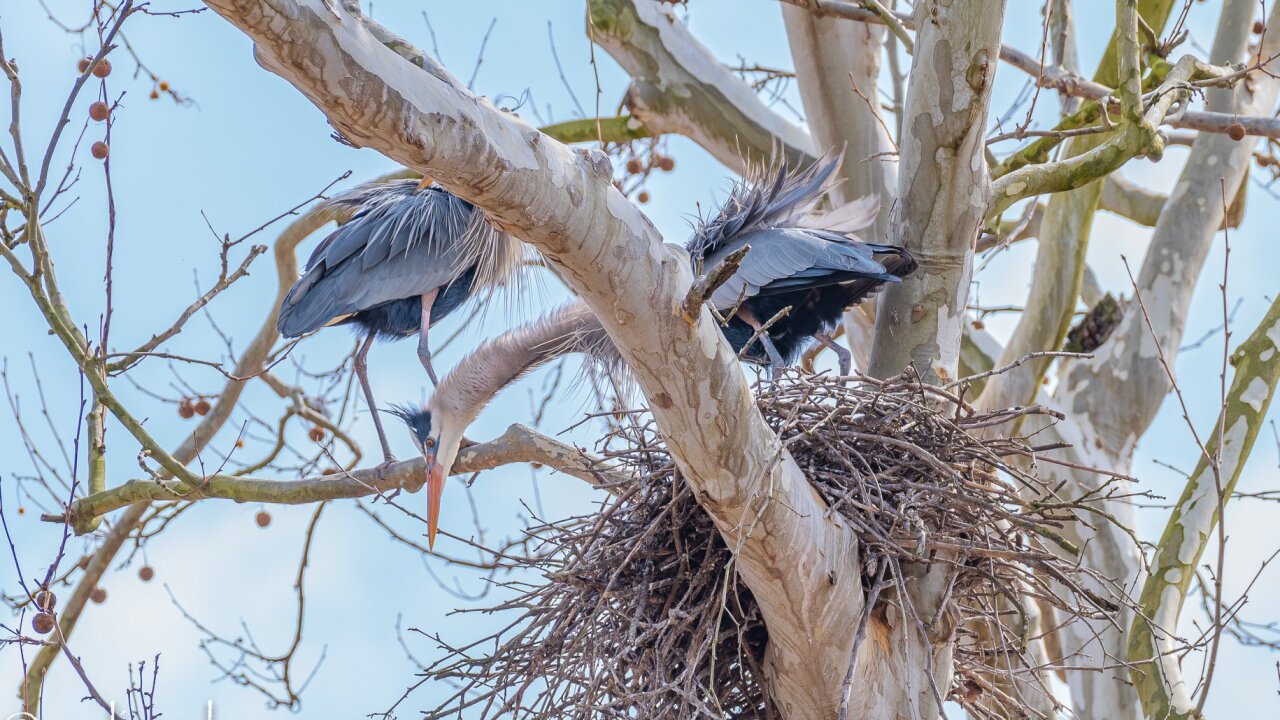 BATH TOWNSHIP, Ohio — There’s a place in the Cuyahoga Valley National Park that’s home to a siege of local celebrities, where their yearly nesting routine draws in crowds by the dozens and creates a line of cars filling any open spot along Bath Road. The great blue heron, a majestic bird that is becoming increasingly common throughout Northeast Ohio, has become a sight to see.

Every year from early March to early April, great blue herons nest in colonies, called heronries, at a place that’s become nearly a guaranteed spot to see them.

The Bath Road heronry, located on Bath Road between Akron Peninsula and Riverside roads, isn’t the typical place one would see dozens of nests in high trees. Right off a main road—and by no means is it secluded or off the beaten path—this spot has become an unusual spot for heron nesting.

“It’s [Bath Road heronry] is a very popular place to go. That isn’t the situation usually, blue herons are skittish when nesting. But because they are behind a fence, they assume they are protected. It’s very weird,” said Andrea Irland, who is a citizen scientist and a staff member of the Cuyahoga Valley National Park for the past 27 years.

Forget the diamond ring. Give me a stick

March to early April is a good time to observe nest building. One thing to keep an eye on is the courtship behaviors between the male and female birds. In a romantic-kind-of-way, a male will gather a stick and present it to the female, who then takes the stick and adds it to the nest, strengthening their bond.

The first ever record of nesting blue herons in the park was documented in 1985 in the Piney Narrows, located on the west side Cuyahoga River, about a half mile north of the Station Road Bridge Trailhead.

Standing at 4-feet tall, with a wingspan of nearly 7-feet, it’s difficult for them to go unnoticed, particularly at the Bath Road heronry. At any given time, there are over 70 nests. In the early 2000s, there were as many as 176 nests, but that number has decreased as other herons have went across the street to start a new nesting site.

“This decline isn’t because of the river quality, it’s the life cycle of heron,” Irland said.

One thing the herons are not doing is following the recommendation to social distance. Dozens of them are hanging out together, high in the trees, definitely not abiding by the 6-feet rule of thumb.

“They’re solitary birds except when they are nesting. They become monogamous, strengthening their bond until hatching begins in late April and early May," Irland said.

Sitting on a lawn chair, Irland said the Bath Road heronry provides the ultimate view to see these interesting birds in action, watching their quirk behaviors— a good distraction given the unprecedented times we find ourselves in. When she was there last week, dozens of cars parked alongside the road just to get a glimpse of these birds.

"It's really something to see, these local icons. Grab the family and head on over there, just make sure you are practicing social distancing," she said.