COVID-19 has cost Ohio tens of thousands of manufacturing jobs 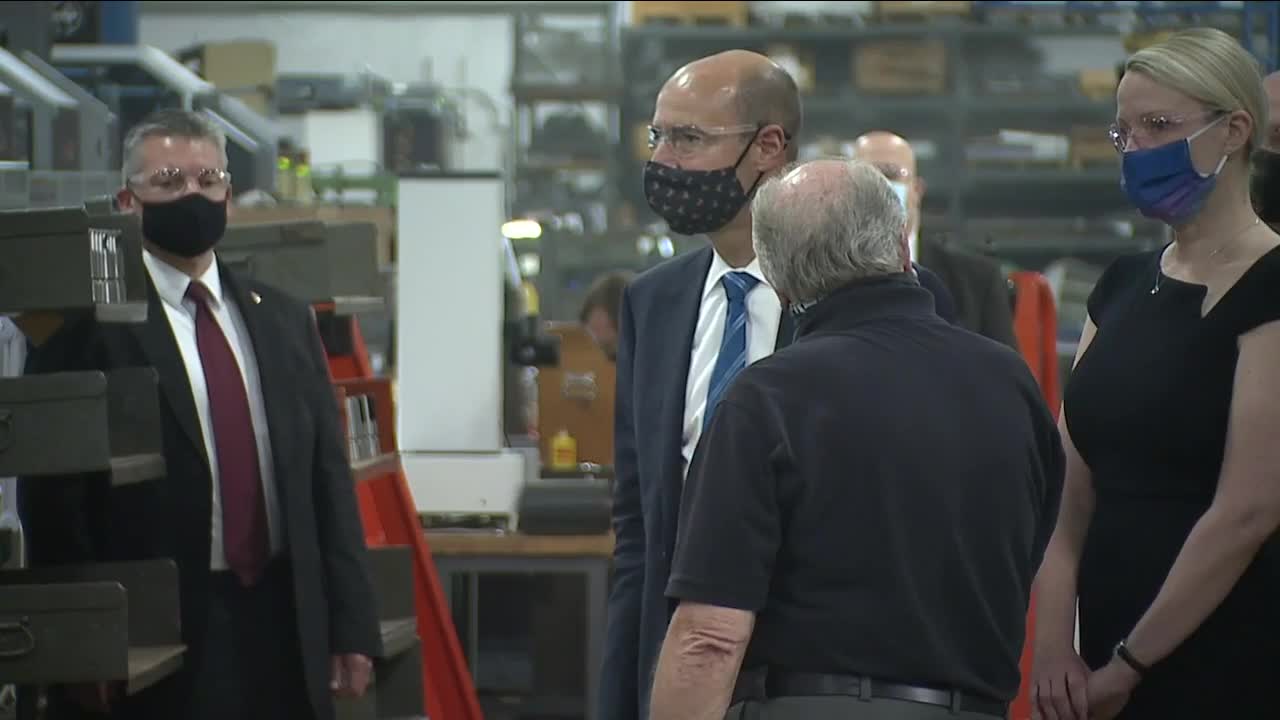 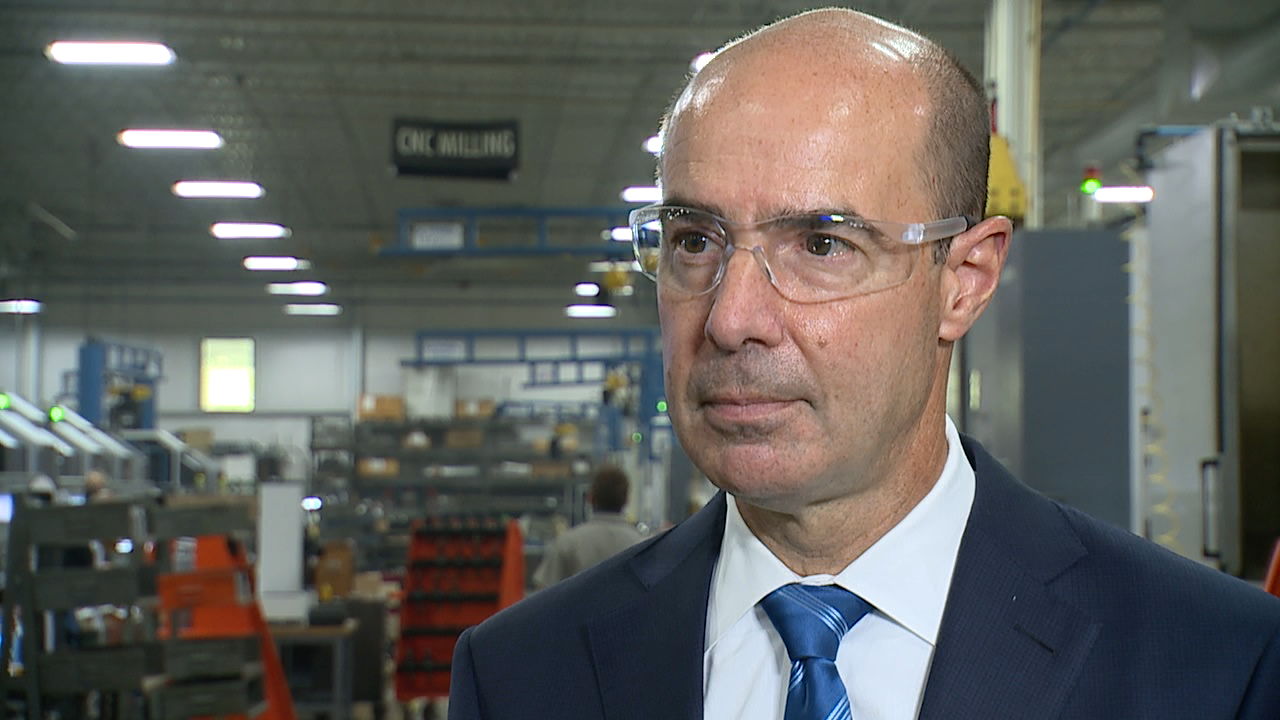 Scalia, one of the sons of the late U.S. Supreme Court Justice Antonin Scalia, spoke exclusively with News 5 about the state of manufacturing in Ohio and in the nation, which has been impacted by the pandemic.

Scalia noted that one area of interest to the administration is apprenticeships “as a way to better train young people or people who are embarking on a second career for the jobs that we expect to have in our economy going forward.”

At Fredon, Scalia spoke with some of the young people in the apprenticeship program, talking to them about “how it is that working here at a contemporary manufacturing facility, in some cases, is more appealing for young people than going to college, which is something they may do later, they may not.”

Scalia highlighted the importance of Northeast Ohio when it comes to manufacturing.

“This part of the country has been an engine for the entire country for generations,” Scalia said, adding that he believes under NAFTA, areas like Northeast Ohio lost jobs and manufacturing capacity. That assertion, however, is not entirely accurate, according to an analysis of NAFTA by the Congressional Research Service, the nonpartisan agency within the Library of Congress that provides nonpartisan policy and legal analysis to the United States Congress.

Scalia said the jobs lost in the manufacturing sector over the years have the administration focused on bringing jobs back “and also supporting the people who want to come into manufacturing jobs and realize what a rewarding career it can be.”

Asked about the Trump administration’s approach with steel and aluminum tariffs, Scalia described it as “a critical part of our strategy to achieve fairer, more reciprocal trade agreements with other countries.”

“Sometimes there've been some difficulties for American companies as we implement it. But the long-term strategy is going to pay off greatly for U.S. workers as well as those companies,” Trump said.

Scalia said before COVID, there had been hundreds of thousands of manufacturing jobs added back to the economy.

“It’s been a tough time with COVID. So many people put out of work,” Scalia said. “We've certainly seen part of our responsibility helping people get unemployment benefits, working with Governor DeWine’s administration to make that happen. But we've also been very focused on reopening and reopening safely. So through the Occupational Safety and Health Administration, we've been providing guidance to employers like Fredon on how they can do that.”

He also noted that the unemployment rate in August was down, adding, “We have work to do, but we're making huge progress.”

Asked about reports that former OSHA employees believed the agency wasn’t doing enough to enforce health and safety guidelines among employers, Scalia said the agency was focused on COVID-19 as early as January.

“It had started telling employers, employees what they needed to do to be safe,” Scalia said. “They put out extensive guidance documents on about 20 different specific industries on steps to take to be safe. We've also conducted investigations and we're bringing enforcement actions against companies that in some cases have not done the right thing.”

He added, “I've been in labor and employment work for 30 years now. I've never seen American businesses as focused as they are right now on keeping their workers safe. But if they fall short, we do have the enforcement authorities that we need to address that. We’re using it. We've now brought more than a couple of dozen cases and there will be more where that's needed.”

Jerry Cirino, Lake County Commissioner, said that while Lake County is “a very important manufacturing hub” for Ohio and this part of the U.S., the challenge with recovering from the COVID-19 shutdowns “is going to be different depending on the industries that you serve,” as well as depending on the size of the business.

Cirino said some manufacturers, deemed essential, have done well during the pandemic, while others, such as those that serve the aerospace industry, have not. He said in Lake County, there are hundreds of open manufacturing jobs that need to be filled.

Cirino acknowledged that the COVID-19 pandemic was, in some ways, a wakeup call.

“So many of us just had no idea how much, both on the pharmaceutical side as well as on PPE, was actually manufactured outside the United States,” Cirino said. “That is the wakeup call from the COVID crisis, and I believe that part of our recovery will come from repatriating those manufacturing jobs back to the United States. But again, for many companies who are not in the PPE business, the recovery is going to be dependent upon an overall recovery in the general economy, as in the aerospace industry.”

Juliana Petti is the executive director for the Alliance for Working Together (AWT) Foundation, a 501(c)(3) nonprofit that is a coalition of Northeast Ohio manufacturers and companies, based in Lake County. She said the manufacturing industry has a “stigma problem.”

“Everyone thinks manufacturing: dark, dirty and dangerous,” Petti said. “And that's not the case anymore. Manufacturing is highly innovative, modern. These are good jobs, family-sustaining wages with benefits.”

Petti said that the pandemic allowed manufacturers to be innovative.

“They were really on the front lines,” Petti said.

Before COVID-19, Petti said, the average American didn’t necessarily know what PPE was.

“But I think manufacturers making things like PPE, sanitizing equipment, cleaning equipment, that really came to the forefront during the pandemic, and people know why it's so important to have things made in your own local community,” Petti said.

Petti urged people interested in manufacturing not to shy away due to a lack of experience or skills.

“I think people just don't know how to get into them because they're highly technical and very skilled,” Petti said. “Apprenticeship training is coming back in America, so I'm excited to see how that goes.”

She added, “Really, what manufacturers want when you talk to most of them is someone that's dedicated, shows up on time, and has a good attitude.”

She suggested people interested in manufacturing submit applications to local employers or take technical training classes online, or even just start researching the industry on YouTube.

“What high schoolers need to start looking out for are pre-apprenticeship opportunities,” Petti said, noting that those are 12-point graduation pathways for high school students. “And AWT here, we have apprenticeships with these local businesses. So once you're in and maybe you're not skilled in manufacturing, maybe you don't have those CNC skills, apprenticeships are that way to take someone who's not skilled and get them up to that next job. That way, there's more entry-level jobs for everyone else.”

Petti said Scalia’s visit to Northeast Ohio underscores why U.S. manufacturing is so important, especially in times of crisis. She challenged people to get out and vote, no matter who they vote for, and to think about the economic impact and about manufacturing.

Congressman Dave Joyce was there to welcome Scalia at the plant and released the following statement:

"I was honored to welcome Secretary Scalia to the Buckeye State and show him the best of what Ohio manufacturing has to offer,” said Joyce. “As someone who has long supported policies to strengthen workforce training and close the skills gap, I’m proud that many of our manufacturers here in Northeast Ohio, like Fredon, focus on recruiting and inspiring the next generation of workers. I thank the Secretary for taking the time to meet with the hardworking team at Fredon today – including their young apprentices – and look forward to continuing to support his efforts to boost apprenticeships and enhance employment opportunities for workers during these challenging times.”