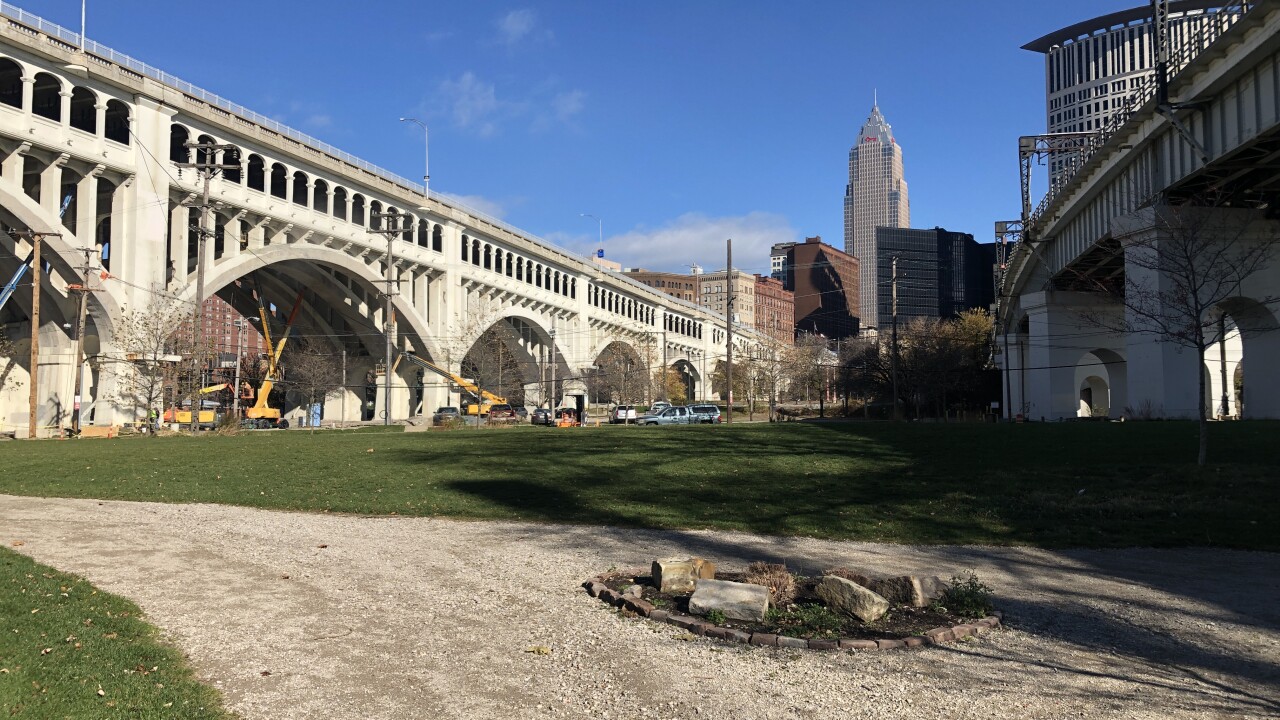 Some parking lot space has already been turned into green space between the two bridges that will be above Canal Basin Park.

CLEVELAND — With a Northeast Ohio Regional Sewer District project completed near Settler’s Landing, the path appears to be cleared for hundreds of thousands of dollars worth of improvements to the Canal Basin Park area that could be finished by the end of next summer.

The first part of the project would create a traditional trailhead experience where the Towpath Trail is being extended right now. A large green space would replace parking lots that sit at the site today.

Part of Merwin Avenue will be turned into areas for pedestrians to use, occasionally allowing service vehicles to pass through to access the Sewer District facility near Settler’s Landing.

A 70-space parking lot will remain near the Towpath Trail.

Ata Adeel from the City of Cleveland Mayor's Office of Capital Projects told a community meeting Tuesday that the cost for Phase 1 would be $688,000, covered by a federal grant administered through NOACA, The City of Cleveland, and savings from the work on the Towpath Trail.

That piece of the project is expected to be done by Fall 2021.

Phase 1 is just a small part of the Master Plan for both the East and West Side of the Cuyahoga River near Canal Basin Park.

“The bridges really are the element that are the strongest visual element and spacial definition,” said City of Cleveland Landscape Architect Jim McKnight.

Under the bridges, the area’s Master Plan includes gathering areas, large green space, and a plaza with pavers and potentially a water feature.

McKnight told a community meeting that the Sewer District’s project was designed to fit into future development in the area and is set back from the river far enough to accommodate a boardwalk that could connect to Settler’s Landing Park.

Steps would connect passers by to the water, potentially have access for kayaks, and would create an outlook point for pedestrians to enjoy the river.

“We’re embracing the fact the river is much cleaner than it was historically,” said McKnight.

Eventually, the city plans to vacate Merwin Avenue and West Avenue to make the green space uninterrupted by roads.

Southwest of the future Canal Basin Park, upgrades to Heritage Park 1 could be finished in 2022, creating 12 public boat docks with the potential for Water Taxi access. That would be about three-tenths of a mile from where Cleveland Metroparks operates the Water Taxi in the Flats right now.

Cleveland Metroparks Landscape Architect Chris Cheraso told a community meeting that the work is paid for with boating infrastructure grants and will create better access to the trails that will lead to Canal Basin Park.

“A lot of these developments are in anticipation of the completion of the Towpath Stage 4,” said Adeel.

On the West Bank of the Cuyahoga River, near the turntable bridge, Heritage Park 2 could also see improvements in the future.

McKnight told the meeting there are plans for a new boardwalk, landscaping, and lighting that would also include an additional landing spot for a Water Taxi.

A bill that would create a new tax credit development tool is heading to the floor of the Ohio House of Representatives.

“I had a positive conversation with the Speaker [Wednesday] morning and I’m hopeful it will be on the floor soon,” said Representative Kirk Schuring in and email.

Senate Bill 39, creating tax credits for Transformation Mixed Use Developments (TMUDs), passed the Ohio Senate in June 2019 and was voted out of the House Economic and Workforce Development Committee Wednesday.

“The bill authorizes a new tax credit to assist property owners in raising capital for the completion of “transformational mixed use developments” (TMUDs), which the bill defines as multiple-purpose developments that meet certain minimum building height or square footage criteria and that are expected to have a “transformational economic impact” on the surrounding area and a total estimated cost of more than $50 million,” explains the bill’s legislative summary.

The Millennia Companies Founder and CEO Frank Sinito supported the bill during an Oct. 23, 2019 committee meeting saying that its passage would be central to completing the company’s plans for The Centennial:

After the bill passed out of committee, Millennia sent this statement to News 5:

We are grateful to the legislators who sponsored and supported this bill designed to spur economic and community development throughout the state.

This important bill, coupled with the immense support we have received from the City of Cleveland and Cuyahoga County, will propel forward the historic restoration and reactivation of one of Cleveland’s most important landmarks, The Centennial.

Also, the passage of this bill would result in new, catalytic development projects positioned to create jobs, boost the economy and support not only Cleveland, but communities throughout Ohio.

Lakewood back to runner-up for Lakewood Hospital site

After Lakewood’s initial choice to develop One Lakewood Place, Carnegie Management and Development Corporation, left the project in early 2020, the city is exploring what is possible with the initial process’ runner-up: CASTO/North Pointe.

Mayor Megan George told the Lakewood City Council “as a result of the decision of the City and selected developer not to proceed together with the project, the City has a unique opportunity to revisit the development proposal presented by the CASTO team. In this regard, the CASTO team has notified the City that they remain committed to this project and are enthusiastic about restarting discussions with the community.”

Carnegie had been working on a $140 million project.

In November, the city and Carnegie released this joint statement:

In 2018, The City of Lakewood (the “City”) and Carnegie Management and Development Corporation (“Carnegie”) entered into an agreement regarding the redevelopment of the Lakewood Hospital site. Over the next two years, Carnegie worked diligently, and expended significant resources to listen to neighbors, engage the Lakewood community, develop a compelling vision and design for the site and attract tenants. Meanwhile, the City demolished the hospital building and worked to prepare the site for development. Despite this progress, the City and Carnegie have determined not to proceed with the development and have resolved all outstanding issues relating to the project.

The City and Carnegie reach this mutually agreeable resolution and wish each other well.

“First, the advisory panel will be reconvened to revisit the CASTO team proposal, discuss any modifications to the original submittal that are contemplated as a result of additional information or changes in the market conditions, and provide feedback to the City,” Mayor George told City Council. “Then, the City Administration will enter exclusive negotiations with the CASTO team and work towards building a term sheet and development agreement for the project. The City Administration looks forward to working together with City Council and the citizen led real estate development advisory panel on the next steps of the process.“