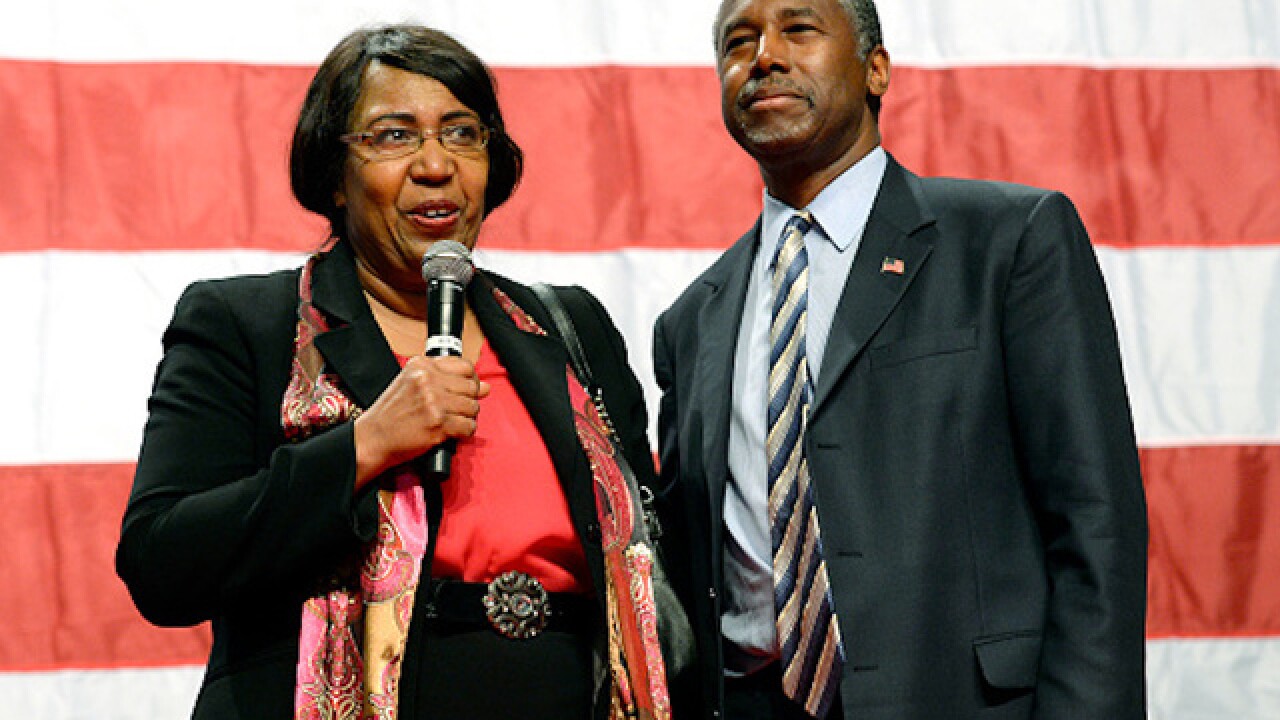 Image copyright 2018 Getty Images. All rights reserved. This material may not be published, broadcast, rewritten, or redistributed.
Kevork Djansezian
<p>ANAHEIM, CA - SEPTEMBER 09: Candy Carson and Republican presidential candidate Ben Carson speak during a campaign rally at the Anaheim Convention Center September 9, 2015 in Anaheim, California. Carson's poll numbers have surged nationally and in the early voting state of Iowa following his performance in the first Republican debate on August 6 to the point where he now trails only frontrunner Donald Trump. (Photo by Kevork Djansezian/Getty Images)</p>

Newly released emails cast doubt on claims by Secretary Ben Carson and his spokesman that he had little or no involvement in the purchase of a $31,000 furniture set for his Department of Housing and Urban Development dining room.

Emails show Carson and his wife selected the furniture themselves.

An August email from a career administration staffer, with the subject line "Secretary's dining room set needed," to Carson's assistant refers to "printouts of the furniture the Secretary and Mrs. Carson picked out."

The documents were released following a Freedom of Information Act request from American Oversight, a liberal watchdog group led by former Obama administration officials, and offer a snapshot into how the agency acquired the furniture.

HUD spokesman Raffi Williams initially denied the Carsons had any involvement in the dining set selection.

"Mrs. Carson and the secretary had no awareness that the table was being purchased," he told CNN last month.

A HUD spokesman went further at the time, blaming the purchase on an unnamed career staffer. "The secretary did not order a new table. The table was ordered by the career staffers in charge of the building," he said.

A few days later, Carson personally addressed the issue , telling CNN in a statement that he was "surprised" by the more than $31,000 price tag and was having the order canceled. The company confirmed a few days after CNN reported the purchase that the agency officially canceled the order on March 1.

Confronted Tuesday with the discrepancy between his past comments and the internal emails, Williams offered only this explanation: "When presented with options by professional staff, Mrs. Carson participated in the selection of specific styles."

The newly released emails show discussions about the dining set going back to last May, when two Carson aides asked for repairs to the chairs of the existing furniture.

"Could you all get the dining room chairs tighten up?" one of the aides wrote. "Most of them are loose and wiggling."

Another called the chairs "fairly precarious" and wrote that she wanted to "avoid someone having an accident (and embarrassment!) should the chair collapse beneath them."

About a week later, HUD received an estimate for $1,100 to repair the chairs, documents obtained by CNN show.

Carson referenced this concern in his statement released earlier this month. The furniture, he said, was "characterized as unsafe" and was "beyond repair and needed to be replaced."

Several months after considering repairs to the dining set in early August, HUD's scheduling office reached out to Candy Carson, the secretary's wife.

"Hi Mrs. Carson!" the scheduler wrote. "There is a designer who will be in town next week on the 15th-17th to look at possibly redecorating the Secretary's office and bringing in new furniture. Are you available on any of those dates and would you like to come in and have input on the redecorating?"

The scheduler noted an urgency to making a decision on the furniture: "We must have the order for new furniture in before the 21st in order to use the money allocated for this fiscal year."

The emails do not include a response from Candy Carson, but in his statement to CNN earlier this month, Secretary Carson also acknowledged there was a deadline to make a decision on the furniture purchase. Carson said he and his wife "were told there was a $25,000 budget that had to be used by a certain time or it would be lost."

A quote for the dining room furniture, released as part of the FOIA, came in at $24,666, just under budget.

The career administration staffer sent the quote to Carson's office, specifically Carson's chief of staff and his executive assistant, casting further doubt on the agency's assertion that the purchase was made entirely by career staff.

"Below is the price quote for all of the dining room furniture. I think this is a very reasonable price and the funds are available," the career official wrote.

"We also have a justification for the cost (as you know, the furniture hasn't been changed since 1988) so this should not be a problem," she added.

In one email chain, the interior designer offered HUD officials links to two different bar carts and a bar cabinet that did not end up being part of the final purchase. An email shows the serving cart options came at the request of "leadership," but it doesn't specify who specifically made the request.

Four months later, receipts show HUD moved forward with the purchase. The final bill came to nearly $7,000 more than the August quote, due to delivery and installation charges, as well as a small price increase for the upholstered chairs.

The newly released emails contradict the expansive denials by a HUD spokesman when CNN first reported this story. The spokesman repeatedly told CNN at the time the Carsons were not involved in the purchase of the pricey dining set.

"New tables, chairs, in that room whatsoever -- zero awareness of this purchase being made," the spokesman said. "Neither one of them knew this purchase was being made. The secretary knew that the table and chairs were old because somebody fell out of a chair once. That's literally it. So they had nothing to do with the purchase, nothing to do with anything around that."

The spokesman, who asked that his name not be used, even denied that Candy Carson had any interest in redecorating the suite.

"I don't think it even crossed her mind, this separate room," he said.

Revelations of the inconsistencies come just weeks after Secretary Carson used a biblical reference -- Psalms 91 -- in his defense: "Under his wings you will find refuge."