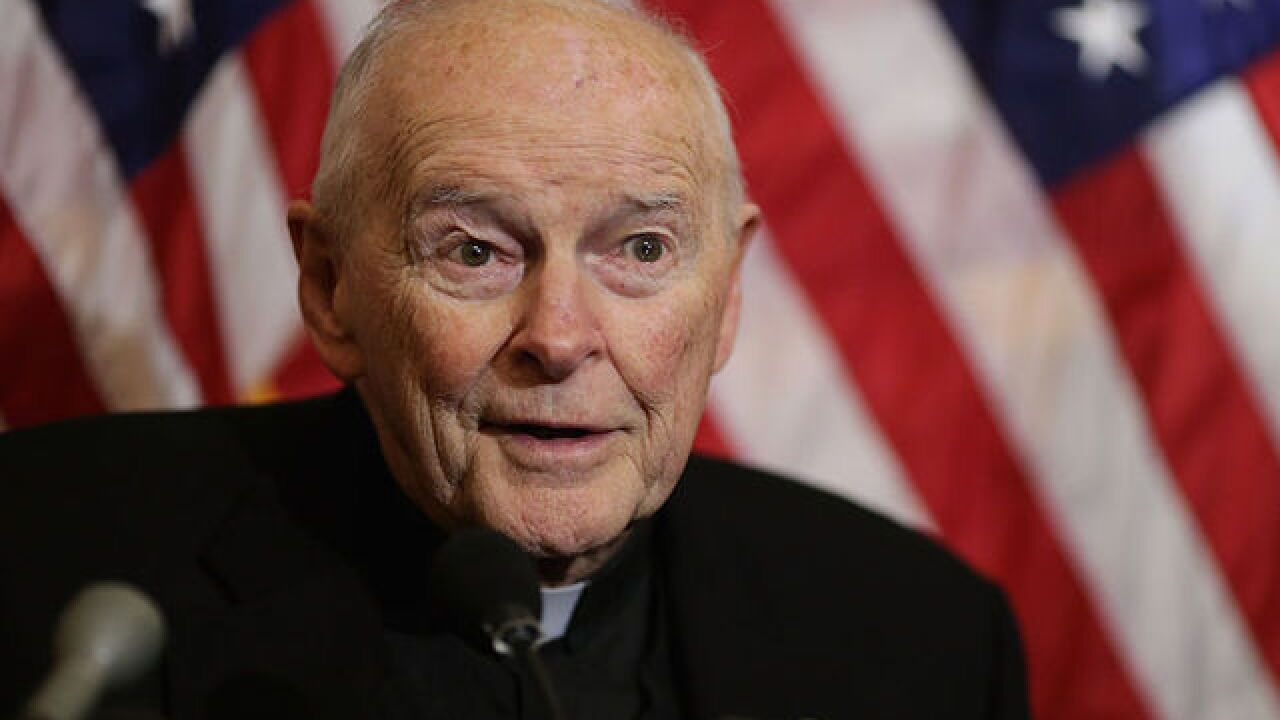 Image copyright 2018 Getty Images. All rights reserved. This material may not be published, broadcast, rewritten, or redistributed.
Chip Somodevilla
<p>Cardinal Theodore McCarrick, archbishop emeritus of Washington, speaks during a news conference with senators and national religious leaders to respond to attempts at vilifying refugees and to call on lawmakers to engage in policymaking and not 'fear-mongering' at the U.S. Capitol December 8, 2015 in Washington, DC. </p>

Pope Francis has accepted the resignation of Cardinal Theodore McCarrick, who once led the Archdiocese of Washington and was a force in American politics, after a decades-old allegation of sexual abuse of a teenage altar boy forced the Vatican to remove him from public ministry.

The Vatican said Saturday that Pope Francis accepted McCarrick's resignation from the College of Cardinals on Friday evening and ordered him to "a life of prayer and penance until the accusations made against him are examined in a regular canonical trial."

The Pope also ordered McCarrick's suspension from public ministry and instructed him to "remain in a house yet to be indicated to him" until the trial.

McCarrick, 88, was informed several months ago that the Archdiocese of New York, where he was ordained in 1958, was investigating an allegation of abuse from a teenager "from almost fifty years ago," McCarrick said in June, when the Pope ordered him to cease his priestly ministry in public.

The Archdiocese of New York said earlier it would not release specific details about the allegation to protect the victim's privacy. It said a review board had found the allegations to be "credible and substantiated." The accusation was also turned over to law enforcement in New York, according to the archdiocese.

In the weeks since the allegations were made public, others have come forward to say McCarrick had sexually abused them, according to published reports.

The cardinal said in June that he was "shocked" by the initial allegation.

"While I have absolutely no recollection of this reported abuse, and believe in my innocence, I am sorry for the pain the person who brought the charges has gone through, as well as for the scandal such charges cause our people," he said in a statement in June.

McCarrick was also accused three times of sexual misconduct with adults "decades ago" while he served as a bishop in Metuchen and Newark, New Jersey, the current bishops of those cities said in June. Two of those allegations resulted in settlements, the bishops said.

McCarrick did not comment on those allegations at the time they were made public and could not be immediately contacted Saturday.

Patrick Noaker, the attorney for the former altar boy who made the accusation against McCarrick, said in June that his client was molested twice by McCarrick, once in 1971 and once the following year.

Both alleged incidents, Noaker said, occurred at St. Patrick's Cathedral as his client was being fitted for a cassock for Christmas Mass. At the time, McCarrick was secretary to Cardinal Terence Cooke, New York's top churchman.

"McCarrick started measuring him, then he unzipped his pants, stuck his hand in and grabbed his genitals," Noaker said. The lawyer said his client, who was about 16 at the time and a student at a Catholic high school in New York, pushed McCarrick away. "One thing he distinctly remembers is that McCarrick told him not to tell anyone about it," Noaker said.

The second alleged incident occurred the following year, again during a fitting for cassocks before the big Christmas Mass at St. Patrick's Cathedral. Noaker said his client was unsure about whether to go but that McCarrick was not in charge of the fittings. But the future cardinal confronted his client in the bathroom, Noaker said, again molesting his client, sticking his hands down his pants.

"He brushed him away and avoided McCarrick like the plague from then on," Noaker said.

As a cardinal, McCarrick was one of the highest-ranking American leaders in the Catholic Church to be removed from ministry because of sex abuse charges.

McCarrick, who led the Archdiocese of Washington from 2001 to 2006, was known as a friendly and effective advocate for the Catholic Church's political priorities, particularly focusing on the plight of Christians and other religious minorities in the Middle East. As the leading Catholic in Washington, he worked with presidents and other powerful figures, earning a reputation as someone who could work with both parties.