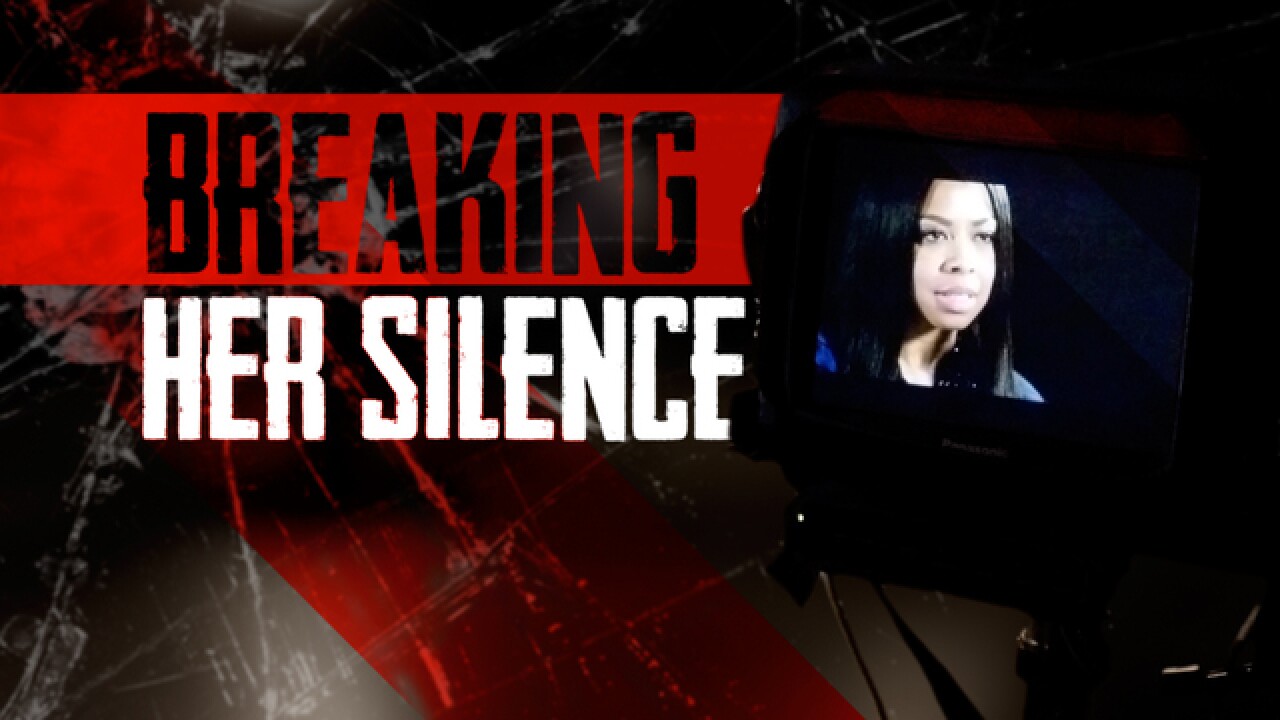 Copyright 2018 Scripps Media, Inc. All rights reserved. This material may not be published, broadcast, rewritten, or redistributed.
<p>In an exclusive interview with Denver7 investigative reporter Tony Kovaleski, a veteran Denver police detective said Mayor Michael Hancock and one of his former aides sexually harassed her when she worked on his security detail in 2011 and 2012. The episode cost Denver taxpayers $275,000 in legal settlements, but the mayor’s alleged involvement in the harassment has not been publicized – until now.</p>

DENVER -- In an exclusive interview with Scripps station KMGH in Denver, a veteran Denver police detective has accused Mayor Michael Hancock of sexually harassing her when she worked on Hancock’s security detail in 2011 and 2012.

Denver police detective Leslie Branch-Wise says Hancock made inappropriate comments and sent her harassing text messages in 2012, which she provided to KMGH. In one text, Hancock compliments her haircut and writes, “You made it hard on a brotha to keep it correct every day.”

In another text, he mentioned having spotted her on television in the crowd at a Denver Nuggets game.

“Enjoy! You better bring them some luck! You look sexy in all that black,” Hancock wrote.

“So I just watched this story on women taking pole dancing classes. Have you ever taken one? Why do women take the course? If not have you ever considered taking one and why? Your thoughts?"

Branch-Wise said she did not respond, but the mayor kept going, writing, "Be careful, I'm curious. LOL!"

When asked what the pole dancing text meant to her, Branch-Wise said, “Kind of that he doesn’t respect me as an employee.”

Hancock told KMGH that while he does not believe his behavior was sexual harassment, he now realizes it was inappropriate.

“Six years ago, when Detective Leslie Branch-Wise was on my detail, we became friends. And I blurred the lines between being a friend and being a boss. Our text exchanges became too casual, too familiar, and last week I learned, after six years, that they hurt her and offended her….

"I am here to accept the responsibility for that and to apologize,” Hancock said.

Branch-Wise says she has no intention of filing a claim now.

“I just want people to know that I'm a woman, I have children, and I'm a victim of sexual harassment,” Denver police detective Leslie Branch-Wise told KMGH. “It made me physically sick. It was extremely scary. And I dealt with it at that time the best way that I could.”

Branch-Wise first raised allegations of sexual harassment in 2012, but directed them at one of the mayor’s aides, Wayne McDonald. She said the harassment became so unbearable, she called the mayor to tell him she wanted to be taken off the detail because of McDonald’s behavior.

Hancock took action and fired McDonald four days later, the mayor’s office confirms. McDonald then sued the city for wrongful termination. He ultimately settled with the city for $200,000 in 2016.

Branch-Wise settled with the city for $75,000 in 2013. As part of that settlement, Branch-Wise agreed not to file claims against anyone else in the city.

She only came forward with the information about Hancock after KMGH received an anonymous letter alleging McDonald wasn’t the only one who sexually harassed Branch-Wise — the mayor, the letter claimed, harassed her too. The letter, which reportedly was also sent to other Denver media outlets, made unsubstantiated personal allegations about the mayor.

“You received an anonymous letter, and it had some information in it that was true,” Branch-Wise said. “I just didn’t want to hide it anymore.”

KMGH has not been able to substantiate many of the claims in the anonymous letter and has chosen not to publish it.

“This whole situation is wrought with politics, but I have to push through those politics. She's responding to an anonymous letter you got. You called her based on that anonymous letter, wrought with politics, and [there are] really slanderous things written into that letter. But more importantly, even when I knew all of that in the backdrop, Detective Branch-Wise deserved more and she deserves an apology from me,” Hancock said.

Hancock appeared to become emotional when asked what the potential reaction to the revelations might be.

“I hope my wife and my children accept my apology. And this city, who I love very much, and the people that I wake up every day to serve and to give everything I have, know that this is not the man, that is not the character of the man who I am. I made a mistake. I'm human. I never purport to be perfect,” Hancock said.

Life on the mayor’s security detail

“I was only employed in [the mayor’s security detail] for less than a year. And pretty early on, between the mayor's aide saying just sexually explicit things to me, in person and via text, and the mayor making inappropriate comments and sending me inappropriate texts … I knew that that unit wasn't the place for me,” Branch-Wise said.

The mayor said he does not believe the text messages constituted sexual harassment but he said he now knows they should not have been sent.

“They're wrong. There's no need to sit here and to dispute, or to try to explain them away, they're inappropriate. No matter which context in which they were sent,” Hancock said. “I apologize to Detective Branch-Wise for those text messages, to my wife and my family, to the people of Denver. They were inappropriate.”

Hancock said he and his security detail become very close and he did not realize he crossed the line with his texts to Branch-Wise.

“Spending as much time with my security detail as I do … we laugh, we tease, we joke. It's not an excuse for me blurring the lines here. I'm not making an excuse, but the walls came down and that's unfortunate,” Hancock said. “This was not OK.”

“If you are down here and your boss is up here and he's showering you with these inappropriate texts and sayings and making you feel uncomfortable, who do you tell if he's at the top?” Branch-Wise said. “It's crushing.”

“Six years ago when Detective Branch-Wise called me to share with me that a staff member was sexually harassing her, I listened,” Hancock said. “We acted swiftly. And within a matter of days, that staff member was fired. I know it was painful for her then. She was very emotional. I never heard that anything I did or said to her at that time was offensive or hurtful to her. I wish I had known.”

Branch-Wise now says she regrets taking a settlement from the city without holding the mayor accountable.

“When we were going through the initial process of the suit, the initial suit, my attorney advised me that I wasn't supposed to speak on the mayor,” Branch-Wise said.

Branch-Wise’s attorneys declined to comment for this story. In a written statement, the current Denver City Attorney Kristin Bronson said:

“In 2012, Detective Branch-Wise filed a complaint with the City claiming that she was being sexually harassed by a then-member of the Mayor’s staff. The matter was reviewed, and the employee was terminated. Detective Branch-Wise subsequently retained private counsel, a former judge and highly reputable attorney, to represent her in the resolution of this claim. In June 2013, the City negotiated a settlement with the Detective through her private attorney. The settlement agreement does not require confidentiality or any provision that would restrict her ability to speak. At all times, Detective Branch-Wise has been free to discuss this matter.”

Branch-Wise said she has watched the #MeToo movement unfold and questioned whether she was strong enough to tell her own story of the way Denver’s most powerful man treated her.

“It made me feel really sad for the women. But I felt like they had something that I didn't: they had courage. In spite of what people would say about them, or whether people would believe them or not, they had courage,” Branch-Wise said. “And I have daughters and if something like this were to happen to them, I would want them to have courage.”

“In 2012, Detective Branch-Wise demonstrated tremendous courage. She's demonstrating courage now, coming forward,” Hancock said. “I want to always encourage women to come forward when they feel like they're in an unwelcoming, uncomfortable environment.”

Branch-Wise said that, as a current employee of the Denver Police Department, she worries she may face consequences for making allegations against Hancock.

“I just want to continue to pursue the career that I love as far as it will take me. I am afraid of retaliation, that's a major fear of mine,” she said.

“I know I've done the right thing, I have the texts to back up what I'm saying, so I'm not afraid that someone can say that I'm making this up because I'm not. But this job is surrounded by very high-powered men and I'm afraid,” Branch-Wise adds.

Mayor Hancock said Branch-Wise has nothing to fear.

“She has served our city well as a Denver police officer. She continues to serve our city well. There's no revenge here. I hope to apologize to her, if she will allow me to do that,” Hancock said. “The city is not interested in retaliation. I'm interested in taking responsibility.”