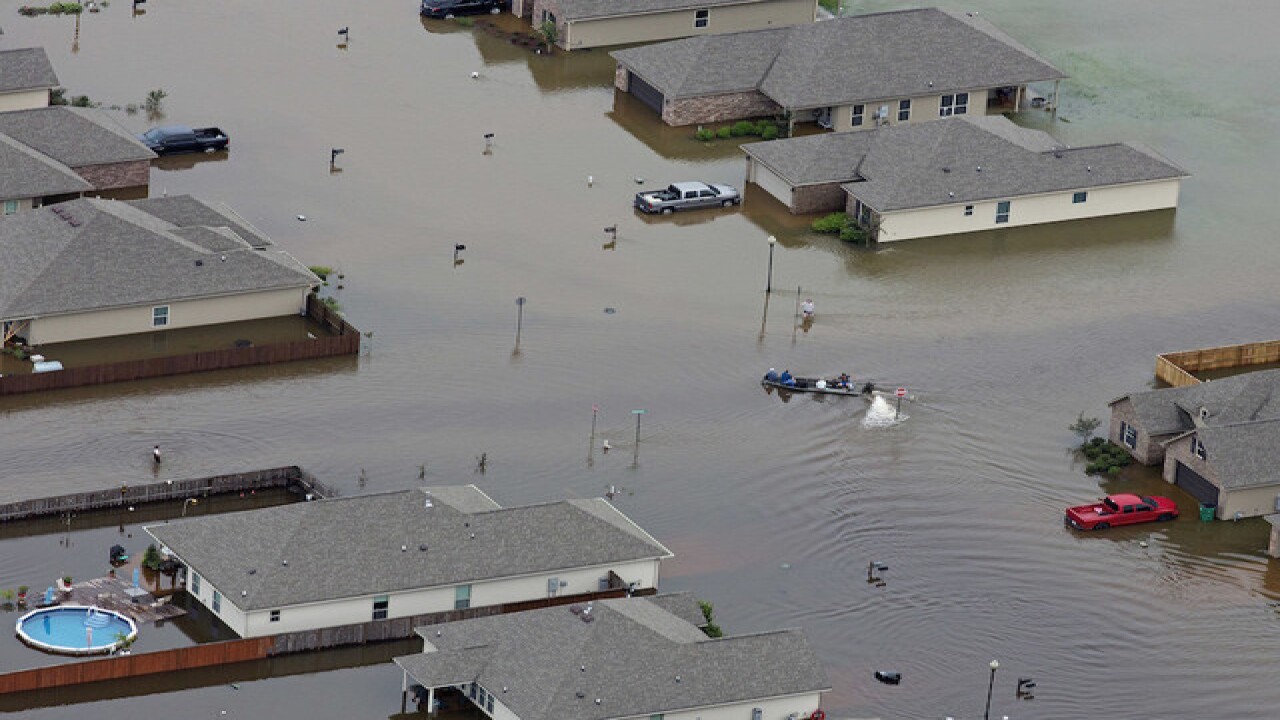 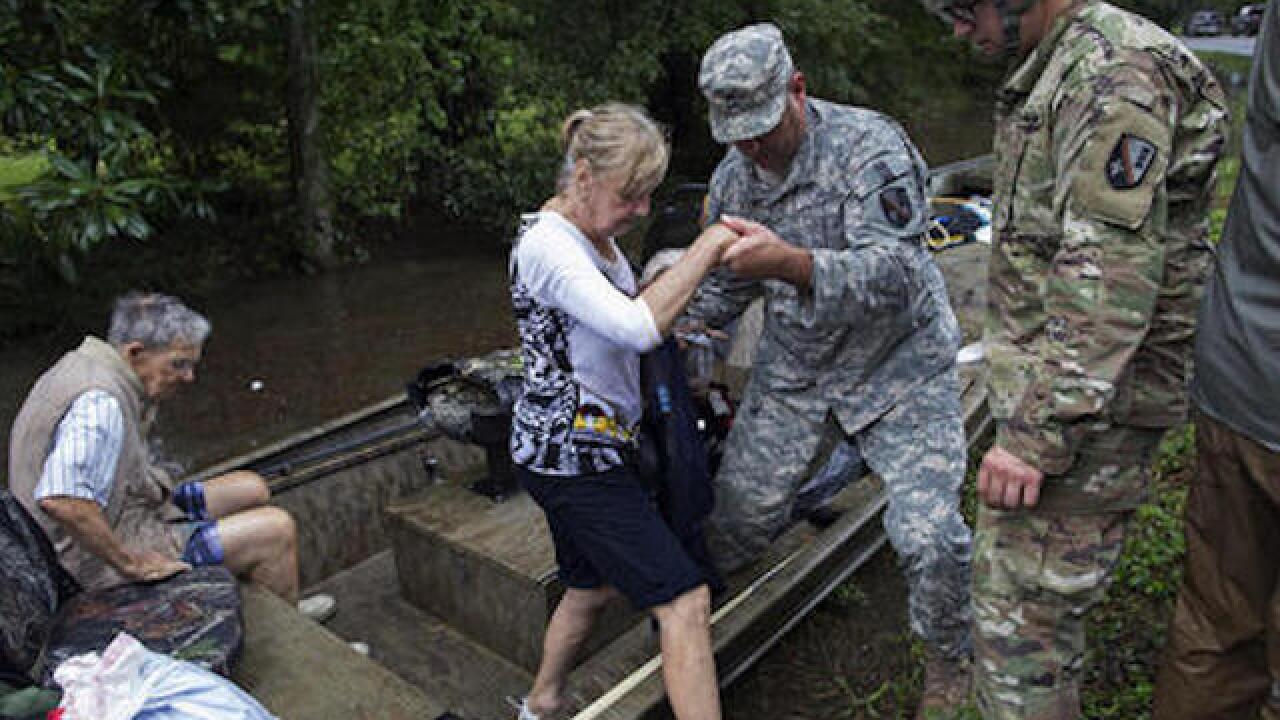 WALKER, La. (AP) — Barbara Manuel saw a flicker of sun and that gave her hope that the worst of the horrific flooding to hit southern Louisiana was over. But then the skies ripped open, the lights in her house started to flicker and with three feet of water outside threatening to come in and two young kids to care for, she knew it was time to get out.

"I've never seen anything like this before," Manuel said, speaking on the side of the road as she was about to get in a National Guard vehicle. The 41-year-old is one of more than 20,000 people rescued from their homes as of Sunday as rain-swollen rivers flooded their banks and wreaked havoc across southern Louisiana.

She was worried about her mother who lives just up the road. High waters made the trip impassable and cellphone problems made it difficult to reach her. But Manuel's two children — a 5-year-old daughter and 8-year-old son — were fine.

"As long as my kids are safe, that's all that matters," she said.

Across southern Louisiana Sunday, residents scrambled to get to safety as rivers and creeks burst their banks, swollen from days of heavy rain that in some areas came close to two feet over a 48-hour period.

More than 10,000 people were in shelters Sunday, according to Louisiana Gov. John Bel Edwards.

In high-water vehicles, boats and helicopters, emergency crews hurried to rescue scores of south Louisiana residents as the governor warned it was not over.

From the air, homes in southwest Louisiana looked more like little islands surrounded by flooded fields. Farmland was covered, streets descended into impassable pools of water, shopping centers were inundated with only roofs of cars peeking above the water.

From the ground it was just as catastrophic.

Drivers tried to navigate treacherous roads where the water lapped at the side or covered the asphalt in a running stream. Abandoned cars were pushed to the side of the road, lawn furniture and children's toys floating through the waters.

The low pressure system that wreaked such havoc moved into Texas, but the National Weather Service warned that there's still danger of fresh floods, as swollen rivers drain toward the Gulf of Mexico.

Rivers in the Baton Rouge area have started to fall, but still remained above flood stage setting record levels over the weekend, the National Weather Service said Monday.

"The rivers and streams north of Interstate 12 have crested and have started to drop, while those south of the interstate continue to rise," Meteoroloest Mike Efferson said.

The Comite River just east of Baton Rouge on Monday morning dropped nearly 2 feet from the 34.2-feet level over the weekend. Flood stage is 20 feet. The Amite River at Denham Springs was at 43.5 feet Monday after reaching 46.2 feet. Flood stage is 29 feet.

"The area around Baton Rouge could see up to a half-inch of rain Monday, with a 40 to 50 percent chance in the forecast," Efferson said.

The federal government declared a major disaster in the state, specifically in the parishes of Tangipahoa, St. Helena, East Baton Rouge and Livingston. Gov. Edwards said President Barack Obama called him and said the people of southern Louisiana were in his thoughts and prayers and that the federal government would be a solid partner.

Edwards also called on people to refrain from going out to "sightsee" even as the weather gets better.

"This is a serious event. It is ongoing. It is not over," the governor said Sunday.

Four people have been reported dead, said Devin George, the state registrar for vital records, earlier Sunday. Later Sunday, a woman's body was recovered by divers from inside a flooded vehicle in East Baton Rouge Parish, appearing to raise the death toll to five.

Authorities worked throughout Sunday to rescue people from cars stranded on a miles-long stretch of Interstate 12 until the governor said on Twitter late in the day that everyone had been rescued.

One of those stranded motorists was Alex Cobb of Baton Rouge, who spent Saturday night on the interstate before being rescued by a National Guard truck.

She was on her way to a bridal shower she was supposed to host Saturday when flooding closed off the highway.

She said she had food intended for the bridal shower and a produce truck up the road shared its stock with drivers — giving out fruits and vegetables to people.

Hundreds of people were gathered at Celtic Media Centre in Baton Rouge, some coming in by bus and others by helicopter.

Matthew and Rachel Fitzpatrick, from Brandon, Mississippi, hopped off one of the choppers with her grandparents. The couple had been visiting family in Baton Rouge when the flooding started. They found temporary refuge at Hebron Baptist Church but became trapped by floodwaters Saturday night.

People at the church used boats and big trucks to rescue others and bring them to the church, where helicopters started picking them up and flying them to safety Sunday.

Matthew, 29, said between 250 and 300 people were still at the church as of late afternoon Sunday.

"Everybody is just tired and nervous and wanting to see what kind of damage they have to their home," Rachel said.

The evacuees included Gov. Edwards and his family, who were forced to leave the Governor's Mansion when chest-high water filled the basement and electricity was shut off.

In one dramatic rescue Saturday, two men on a boat pulled a woman from a car almost completely underwater, according to video by WAFB. The woman, who's not initially visible on camera, yells from inside the car: "Oh my god, I'm drowning."

One of the rescuers, David Phung, jumps into the brown water and pulls the woman to safety. She pleads with Phung to get her dog, but he can't find it. After several seconds, Phung takes a deep breath, goes underwater and resurfaces — with the small dog.

Other effects from the flooding:

— A hospital in Baton Rouge — Ochsner Medical Center in Baton Rouge's O'Neal campus — has evacuated about 40 patients and is expected to evacuate another 10 to 15.

— Amtrak is busing customers from Jackson, Mississippi, to New Orleans instead of using the train.

— Rescuers have taken out hundreds of pets as they go door-to-door searching for people.

— The head of the Mississippi Emergency Management Agency says 56 people remain in a shelter because their homes are flooded.