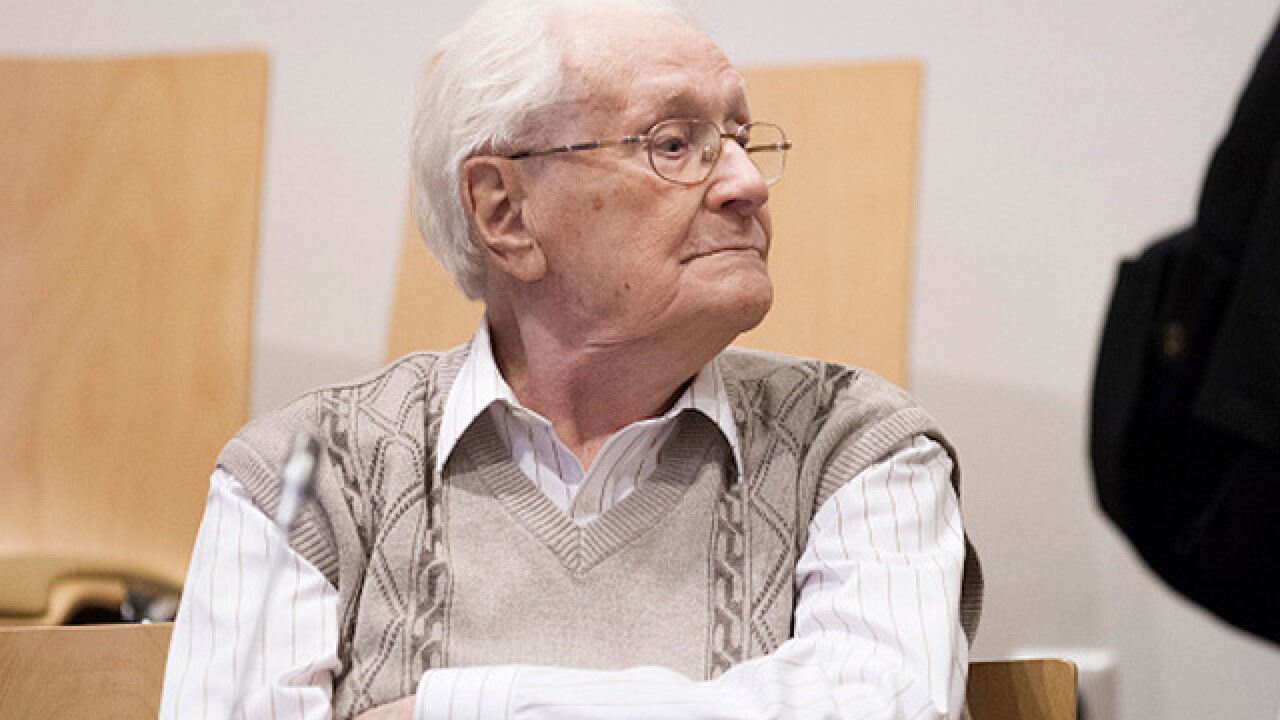 Image copyright 2018 Getty Images. All rights reserved. This material may not be published, broadcast, rewritten, or redistributed.
Pool
<p>LUNEBURG, GERMANY - 21 APRIL: Oskar Groening, 93, arrives for the first day of his trial to face charges of being accomplice to the murder of 300,000 people at the Auschwitz concentration camp on April 21, 2015 in Lueneburg, Germany. Groening was an accountant with the Waffen SS and has been open about his role, claiming in interviews with media that he accepts his moral responsibility. Groening has also written an account of his experience, in what he claims is an effort to counter Holocaust revisionists. (Photo by Andreas Tamme - Pool/Getty Images)</p>

A former Nazi SS guard known as "the bookkeeper of Auschwitz" has died before serving a four-year jail term, authorities in Germany said.

Oskar Groening, 96, was sentenced for being an accessory to murder in 2015, but never went to jail due to a series of appeals for clemency on grounds of old age and ill-health.

He died in a hospital on Friday, according to Spiegel Online. The Hannover public prosecutor's office said it had been informed of Groening's death by his lawyer.

Groening was found guilty of being an accessory to the murder of 300,000 people at the Auschwitz death camp in Nazi-occupied Poland during World War II.

He was accused of counting the cash found in the belongings of new arrivals at the camp and sending it to Nazi headquarters in Berlin.

At least 1.1 million people were killed in the camps at Auschwitz, the vast majority of them Jewish victims of the Nazi genocide, but also Poles, gay people, disabled people and other persecuted minorities.

About six million Jewish people died in Nazi concentration camps during the war.

For many years after the war, Groening worked as an accountant in a factory and suppressed what he had witnessed and participated in at Auschwitz.

But in the mid 1980s he finally came forward to say he had seen the mass killings in response to claims by Holocaust deniers.

This admission opened him up to public attention and scrutiny -- and ultimately prosecution.

Groening insisted in a 2005 interview with Der Spiegel that he had been no more than a "cog in the gears".

His first plea for clemency was denied by German prosecutors a day after it was made public, but he never served the sentence due to a raft of further appeals. His latest appeal was denied in January.

The legal doctrine under which Nazis can be tried in Germany began to evolve with the conviction in 2011 of another convicted Nazi war criminal, John Demjanjuk, as an accessory to the murder of 28,000 Jews in the Sobibor death camp in Poland.

In 2016, Reinhold Hanning, a former SS guard at Auschwitz, was convicted of having assisted in the deaths of 170,000 people and sentenced to five years in prison.

The trial of Hubert Zafke -- then 95 and accused of being an accessory to at least 3,681 murders at the same camp -- also began in 2016, but ended in September last year after he was deemed no longer fit to stand trial due to dementia, according to Reuters.

In statement posted online, Dr Efraim Zuroff, chief Nazi-hunter at the Simon Wiesenthal Center, a Holocaust research group, said Groning's death just before he was due to serve his sentence was "unfortunate, at least on a symbolic level."

"Without at least symbolic justice, these trials -- as important as they are -- lose an important part of their significance," he said.

"Their victims never had any appeals, nor did their tormentors have any mercy. Consequently these perpetrators don't deserve either."