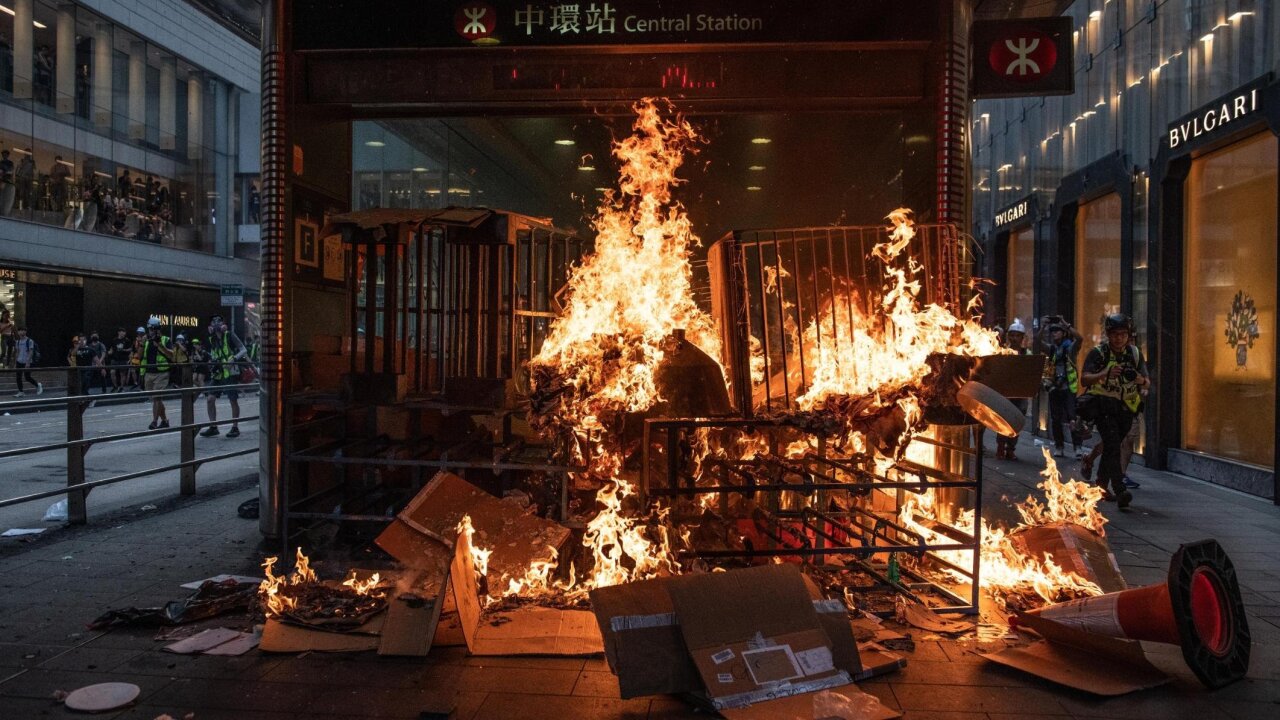 Protests calling on US President Donald Trump to intervene in the ongoing Hong Kong political standoff escalated rapidly Sunday, with marchers setting fire to a barricade outside a subway station entrance in the city's business district.

Earlier in the day, tens of thousands of protesters waving US flags marched on Hong Kong's US Consulate to call for help from the Trump administration in ending a three-month confrontation with the government.

The march began in the Chater Garden public park in Central before heading to the consulate as part of the 14th straight weekend of public demonstrations in the Asian financial hub.

In a letter which protesters planned to presented to consulate officials, the group calls for the passing of the proposed "Hong Kong Human Rights and Democracy Act 2019" by the US Congress.

One banner carried at the march read "President Trump, please liberate Hong Kong" in English. Some marchers sang the US national anthem as they moved towards the consulate.

"We share the same US values of liberty and democracy," 30-year-old banker David Wong said. "USA is a country of democracy. Donald Trump is elected by his people. We want this."

The protests began peacefully but rapidly deteriorated into violence and vandalism over the afternoon, after police appeared to arrest a number of people in the busy Central subway station.

Protesters erected a barricade at one of the subway exits before being setting it on fire. Other exits had their glass windows smashed or defaced with graffiti.

The Sunday clashes indicate that an attempt by the Hong Kong government to defuse the crisis by withdrawing a controversial China extradition bill on Wednesday, one of the official five demands of the protest movement, had failed.

Leading activists said the move was too little too late and already on Sunday groups of protesters have been heard chanting, "Five demands, not one less."

The march is unlikely to end allegations by the Chinese government and state-run media that the United States has been interfering in the Hong Kong protests.

Speaking last week, Hong Kong and Macau Affairs Office spokesman Yang Guang accused US politicians of "shooting their mouths off" on the demonstrations.

US President Donald Trump has shown little inclination to get involved in the Hong Kong protests since they began in June.

In August he said he hoped the demonstrations would eventually work out "for everybody, including China" and that no one gets hurt.

But some US politicians have been pushing for greater US action to help the protesters, with some even pushing for an official re-evaluation of Hong Kong's "most-favored-nation" trade status with the United States.

That special status gives countries certain trade advantages, including lower tariffs on imported goods, according to the US government.

A bipartisan group of US senators introduced the "Hong Kong Human Rights and Democracy Act" in June, which requires an annual check that Hong Kong is autonomous enough "to justify special treatment."

It's this act which some protesters are calling on the US Congress to pass to put additional pressure on the Hong Kong government and Beijing to accede to their demands.

The interest US politicians have shown in Hong Kong, including Vice President Mike Pence and the Democrat Party leadership, have led to accusations from China that Washington is behind the three-month long demonstrations.

"It is an open secret in Hong Kong that the forces protesting the extradition bill have been sponsored by the US," Chinese state-run tabloid Global Times said in an editorial in July. Multiple high-ranking Chinese Foreign Ministry officials have repeated the claim without any proof.

The US State Department responded that Chinese claims of their involvement are "ridiculous."

Protest organizers say millions of people have taken to the streets of Hong Kong since early June, in protests which evolved from objections to the planned extradition bill into wider calls for greater democracy and civil rights.

Currently the protest movement has five demands, including an investigation into allegations of police brutality and the release of arrested demonstrators.

On Wednesday, Chief Executive Carrie Lam announced one of the protesters' demands would be met by withdrawing the extradition bill from the local parliament.

But so far the government has refused to meet any of the other demands.

Despite the withdrawal by Lam, there have been clashes between police and protesters every night in the past week.

Much of the action has focused on the streets around Prince Edward subway station, in the residential and commercial hub of Mong Kok, where video from Sunday night showed police officers chasing down and forcefully arresting protesters.

Demonstrators at Sunday's march said that they're not going to back down until all their demands are met. "It's just like going to work," 64-year-old protester Felix Wu said, laughing.