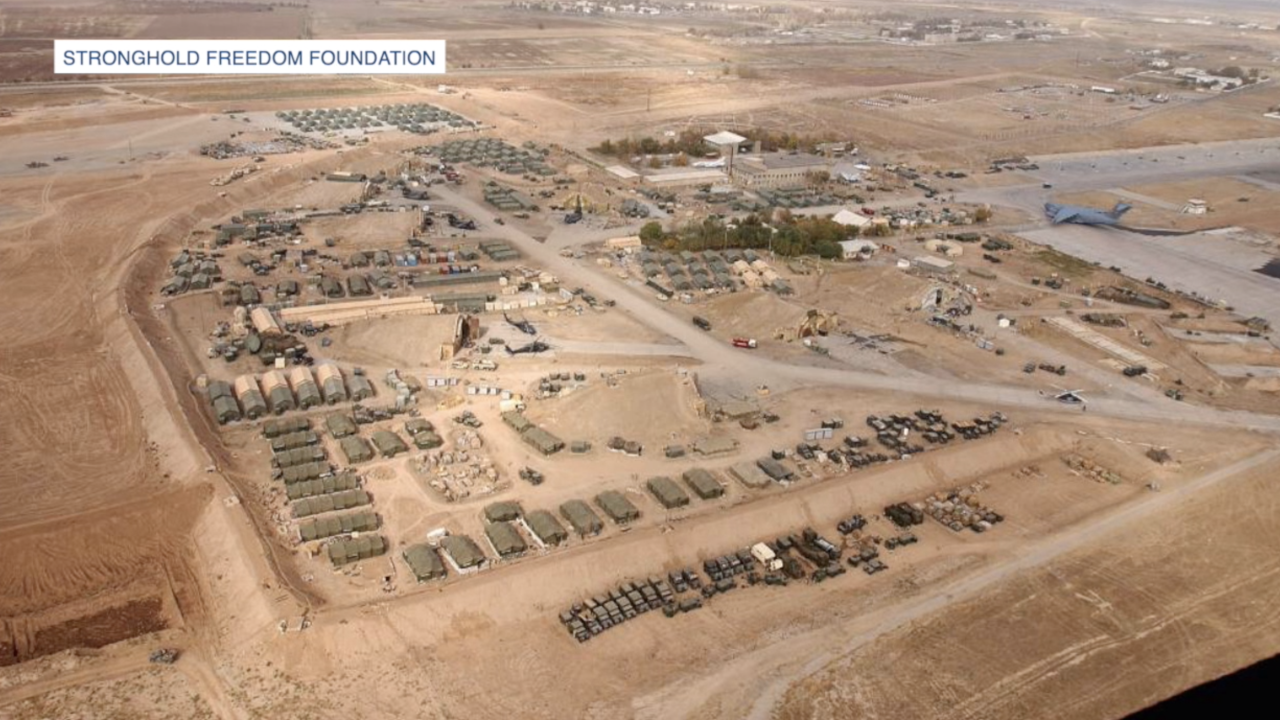 Brian and Betsy Liebenow love getting married so much, they do it every year on February 2.

“We renew our vows and I wear my dress every year and we do it different places every single year,” Betsy Liebenow said.

The married couple never takes their life for granted because they know just how precious life can be.

“He barely got touched with radiation and this is what became of his radiation. This is all because of radiation damage. I think it’s because of the exposure of him being there in Uzbekistan,” Betsy said.

Right after 9/11, Brian was deployed to Karshi-Khanabad – also referred to as K-2. It’s an old Soviet airbase located about 100 miles north of the Afghanistan border. He was only there for 70 days, but ever since, he’s had health complications.

That’s only about a quarter of the list. The Liebenows say they believe what he was exposed to has played a huge role in his rigorous health journey.

“When I first got there, I was in an aircraft bunker where they used to store chemical weapons and nuclear waste," Brian said. "And after that, I was moved into tent city, and all of the tents had sandbags around them and the sandbags had sand that was full of radiation.”

Veteran Mark T. Jackson, who also spent time at K2, says 40 percent of troops who spent time in Uzbekistan have some sort of ongoing disease like cancer. He says dozens are already dead from rare brain cancers. It was all anecdotal evidence, until environmental studies of the area done in 2001 and 2004 by the Department of Defense were declassified last month.

“Upon initial occupation, within a few days, U.S. service members were getting sick and local contractors were sick and dying from the digging they were doing at this site,” Jackson said.

Jackson says the Soviets who formerly occupied the land in the late 1970s weren’t good stewards of the environment, but the exposure to radiation and chemical weapons isn’t the issue. Rather, it’s the recognition and care for veterans years later.

“Even knowing what we know now, we would still go," Jackson said. "It is the fact that the DoD has not provided official recognition for any veterans that have gone to Uzbekistan period.”

According to Jackson, the only time a K2 veteran can get healthcare is when they’re sick. They can’t get preventative screenings for diseases like cancer. He says the word ‘Uzbekistan’ is not recognized by current federal regulations.

“About 2,000 of our veterans -- so somewhere in the neighborhood of 20% -- of the people who went to K2 only went to K2. Which means that 2,000-person population, even though they’re veterans, if they’re sick, they can't get care. If they would like to prevent themselves from getting sick, they’re out of luck.”

On its website, the U.S. Department of Veterans Affairs lists what K2 service members were potentially exposed to. The DoD conducted a study to look at cancer outcomes and found people at K2 are at a higher risk of developing certain cancers and tumors.

However, the VA says those results shouldn’t be viewed as definitive evidence and notes that more studies are needed.

Veterans who have health problems they believe are related to service at K2 are encouraged to file a claim, but those claims are decided on a case-by-case basis.

The nonprofit Stronghold Freedom Foundation wants to ensure all K2 veterans are taken care of. Mark is the legislative director of the nonprofit. As of today, he says there are four separate K2-related pieces of legislation pending in the Senate.

“The Department of Veteran’s Affairs since it was established during the civil war was established specifically to take care of every single person who fights for the United States, regardless of where that was, provided that service was honorable," Jackson said. "K2 veterans honored their part of that agreement. The government must honor their part of the agreement.”

The National Defense Authorization Act – which outlines how funds are allocated for the Department of Defense each year -- must be signed by October 1st.

“Recognize that these soldiers went, recognize that they did it that they volunteer to do it – all of them," Jackson said. "And they would do it again, myself among them, even knowing that we might get sick and die. Because that’s what you do. When you volunteer, maybe you get hit by a bullet, right? Or maybe the bullet hits you in 2003 and moves through your body over the course of the next 18 years.”

The Liebenows say they consider themselves fortunate because Brian got sick while he was still on active duty. They’re determined to help other veterans get the coverage they deserve.

“We’re ok," Betsy said. "We’re still here and we’re ok and we have a beautiful family and we get to do things. These other people are struggling.”