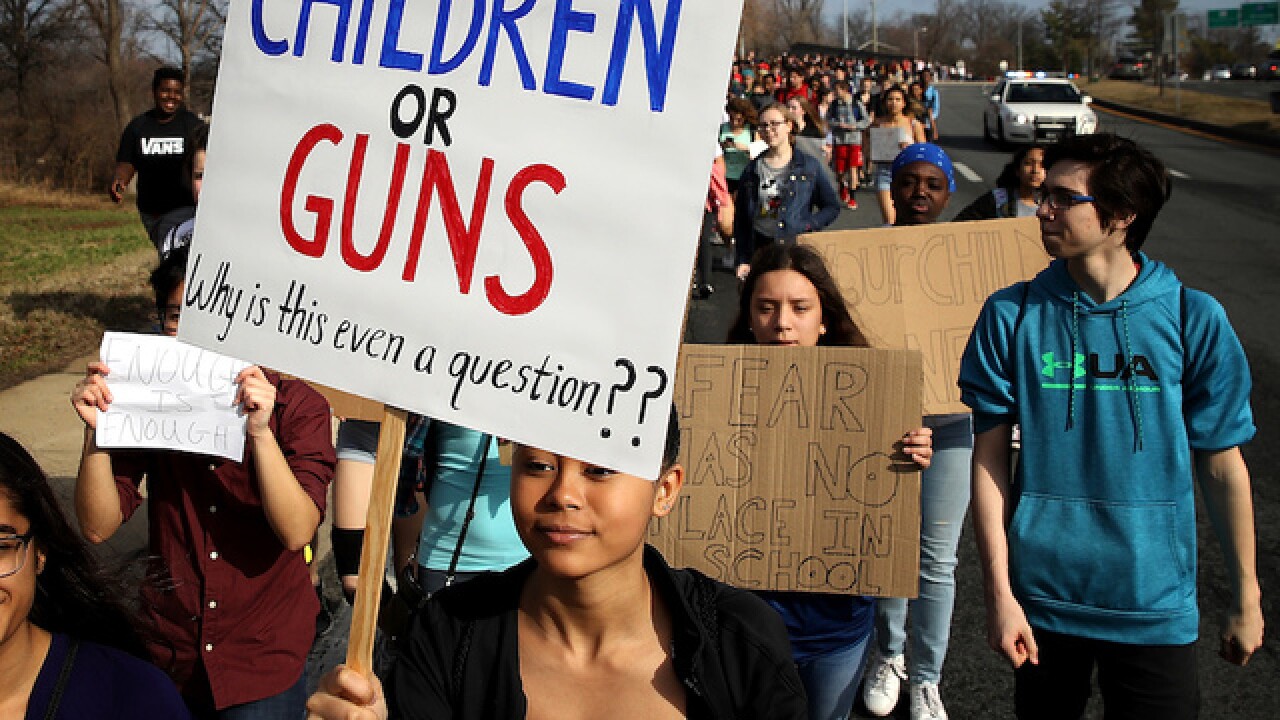 Florida lawmakers celebrated the passage of a school safety bill on Wednesday in response to last month's shooting in Parkland. But the bill left some with a new concern.

The provision establishes a voluntary "guardian" program that allows personnel who meet certain criteria to carry firearms in schools‎.

Democrats in the Republican-controlled House and Senate fought unsuccessfully to remove the controversial provision from the bill, also known as SB 2076. They argued that minority students -- who are often subject to disproportionate levels of punishment compared to their white counterparts and are more likely to be mistaken for perpetrators -- could become targets.

"My voice was never heard," lamented Miami-area Democratic Rep. Roy Hardemon. "No one heard our cry."

Florida Gov. Rick Scott has been a vocal opponent of arming teachers. But he has not said definitively whether he would veto a bill that includes the provision.

NAACP President and CEO Derrick Johnson called the idea of arming teachers "irresponsible." He said he hoped the governor would be more responsible than lawmakers who voted in favor of SB 2076.

"Our concern is not only black and brown students but all students who could be harmed," Johnson said.

Several Democrats voted in support of the overall bill -- 3 out of 15 in the Senate and 10 out of 41 in the House. But debate over the guardian program broke down along partisan lines, highlighting a stark racial divide between minority legislators, many of whom hail from diverse, urban communities, and their white counterparts from rural, racially homogeneous parts of the state.

Rep. Tracie Davis, a Democrat who represents part of Duval County in northeastern Florida, said the issue of gun violence "affects our communities in a way that some in this chamber will never understand."

Rep. Cynthia Stafford, another Miami-area Democrat, called it a "dangerous policy." She said she heard from parents and students who do not want more guns in schools, "So why are we doing this?" she asked.

Stafford cited the impact of implicit bias -- a term that refers to unconscious attitudes that impact our actions and decisions -- on people of color as another factor that makes the program dangerous.

"I'm worried a black or brown boy running down the hall like anybody else to get to safety reaches in his pocket to pull out his cell phone could be mistaken for [a] shooter."

She also expressed concern that a minority school staffer serving as guardian with a gun would be seen not as protector, but as a perpetrator.

While members of both parties want schools to be "safe spaces," they disagreed on whether introducing more guns to school premises was the solution. Some Republicans took issue with the argument posed by Democrats that arming teachers could pose a danger to minority students.

"What bill are we talking about here? Is this a different bill than from the one I thought we were talking about? Because I thought we were talking about school safety?" said Rep. Elizabeth Porter, a Republican from Lake City. "I've heard that all of a sudden the folks that had been proponents of teachers all these years are saying teachers are now incompetent to have a concealed weapon permit. They're racist, they're bigoted, they're going to target black boys and brown boys. I don't think that's our teachers at all."

Other Republicans including Rep. Ralph Massullo, who represents Citrus County and part of Hernando County, argued it was important for schools to have another option in case an armed school resource officer is unable to do so.

'I need you to stand with the families'

Some teachers, parents and students from Parkland and other Florida schools have been among the most vocal opponents of the plan.

Named for the coach who threw himself in front of students, the program excludes teachers who "exclusively perform classroom duties" from serving as guardians. Those who perform additional duties, like coaching football or heading the drama club, would be allowed to participate. So would other school staff like administrators and cafeteria workers.

Per the legislation, sheriffs in each county, along with the school board, would decide whether to establish the Coach Aaron Feis Guardian Program. School personnel would be required to participate.

"The guardian program is going to disproportionately affect the black and brown community," said Maxwell Frost, a 21-year-old student activist who participated in a "die in" demonstration outside the House chamber on Tuesday.

He said he believed most liberal, affluent counties would not opt into the guardian program. But cities with a significant minority population that are surrounded by Republican areas could see their local sheriff and school board decide to take part.

Democratic Rep. Jared Moskowitz, a Stoneman Douglas alum who represents nearby Coral Springs, voted for the bill. He said all 17 Parkland families signed onto a letter supporting the legislation.

Ryan Petty and Andrew Pollack, who each lost a child in the shooting, traveled to the capitol Wednesday to watch the debate and express their support for the bill. Pollack acknowledged the bill was not perfect but that it was better than nothing.

What else the bill says

Several Democratic members said they supported other provisions of the bill. Rep. Larry Lee, who represents part of St. Lucie County, said that without the guardian program "this would be a perfect bill."

The measure would raise the age to buy a firearm to 21 years old from 18 and would require a three-day waiting period for gun purchases, with some exceptions; ban the sale or possession of bump-fire stocks that allow a semiautomatic weapon to fire more like an automatic weapon; give law enforcement more power to seize weapons and ammunition from those deemed mentally unfit or otherwise a threat and provide additional funding for mental health services and armed school resource officers.

In one concession to Democrats, the Senate approved a requirement that potential guardians must undergo 12 hours of diversity training in addition to the 132 hours of firearms training already required. The measure was introduced by legislative black caucus member Sen. Randolph Bracy, who represents part of Orange County in the Orlando area. It was the only Democratic-sponsored amendment to pass and it remained part of the bill that passed the House.

The change did little to soothe the concerns of minority members of either chamber.

What about 'Stand Your Ground' law?

Opponents of the program also expressed concerns about how Florida's controversial Stand Your Ground self-defense law would apply to teachers.

The law, made famous by the 2012 killing of Trayvon Martin by neighborhood watchman George Zimmerman, lets people use deadly force against if they feel their lives are in danger.

"They don't have to prove it, if they feel it. As a result our neighborhoods have become even more dangerous," said Rep. Amy Mercado, a Democrat of Puerto Rican descent from the Orlando area.

She decried the fact that the bill does not exempt teachers from being able to use Stand Your Ground to justify killing a student.

Rep. Sean Shaw, a Democrat from Tampa, echoed her concern.

"There is not a scintilla of proof that it would enhance school safety or prevent mass killings in schools," he said in an email.

In a Time op-ed, Sherrilyn Ifill, president and director-counsel of the NAACP Legal Defense and Educational Fund, called for "forcefully and relentlessly" resisting such a program.

"It does not take a great deal of imagination to contemplate instances in which armed teachers dealing with recalcitrant children will react out of fear and racial stereotype and discharge their weapons as they do the disciplinary code," Ifill wrote.

Numerous studies make it clear that minority students are more likely to be stereotyped as violent and singled out for disproportionate disciplinary action, said Kristen Clarke, the president and executive director of the Lawyers' Committee for Civil Rights Under the Law.

"Teachers and staff with guns are likely to take the lives of innocent and unarmed minority students -- a crisis that we already see play out at the hands of police officers on our nation's streets," she said. "By arming teachers, we would undoubtedly expose the state's African American, Latino and other minority students to a far greater risk of violence than others."