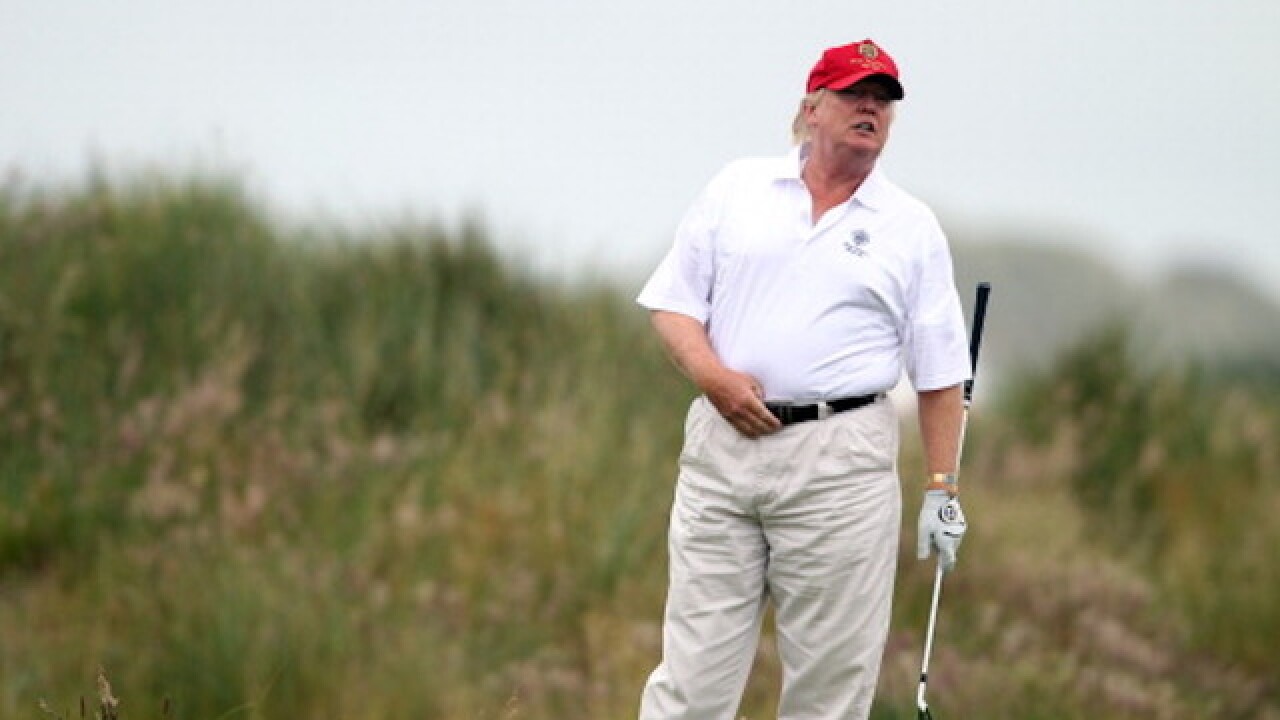 Image copyright 2018 Getty Images. All rights reserved. This material may not be published, broadcast, rewritten, or redistributed.
Ian MacNicol
<p>ABERDEEN, SCOTLAND - JULY 10: Donald Trump plays a round of golf after the opening of The Trump International Golf Links Course on July 10, 2012 in Balmedie, Scotland. The controversial £100m course opens to the public on Sunday July 15. Further plans to build hotels and homes on the site have been put on hold until a decision has been made on the building of an offshore windfarm nearby. (Photo by Ian MacNicol/Getty Images)</p>

President Donald Trump reached a presidential milestone at his Palm Beach County, Florida, golf club on Saturday: One hundred days in office at a golf club that bears his name.

Trump, once a critic of presidential golfing, has ignored his own advice and made a habit of visiting some of the many golf courses emblazoned in his moniker. The habit is part of the broader trend of the President and first lady making frequent trips to properties owned and operated by the Trump Organization.

Trump has spent 36 days at his Florida club and 40 days at his New Jersey course and made the short trip from the White House to his Virginia club 23 times. He golfed once at his Jupiter course with professional golfers Tiger Woods, Dustin Johnson and Brad Faxon.

Trump's golf habit has drawn incredible scrutiny in his first year in office, with watchdog groups raising questions about whether his endorsement of his own properties violates federal law, and reporters standing outside the gates of his courses hoping to confirm that Trump is hitting the links.

Critics have faulted Trump's repeated trips to his properties, claiming they allow the businessman to boost the bottom line at the Trump Organization and give his properties a presidential stamp of approval. Though Trump transferred his businesses holdings to a trust run by his sons before taking office in 2017, he stopped short of selling off his holdings and still could benefit from money flowing into his properties.

But the primary criticism has stemmed from how Trump, as a private citizen, slammed Barack Obama for hitting the links while president.

"Can you believe that, with all of the problems and difficulties facing the U.S., President Obama spent the day playing golf," Trump tweeted in 2014. "Worse than Carter."

Trump also made presidential golf an issue during the 2016 campaign.

"I'm going to be working for you. I'm not going to have time to go play golf," Trump said in August 2016 on the campaign trail.

"First, there is his hypocrisy in criticizing Obama for golfing and then playing much more himself," Eisen said. "Then there is the fact that he is using his government platform to promote his businesses."

Eisen added, "Finally, he is also mingling with representatives of corporate interests who are paying to play, and not just golf. Because they have business before the federal government, that creates more conflicts. Trump has hit an unprecedented ethics bogey."

Trump has spent part of 58 days at the opulent private estate during his time in office.

But when the weather in South Florida turns muggy and hot over the summer months, Trump has decamped to his golf course in New Jersey, where he stays inside the walls of the club. In total, Trump has spent part of 40 days at the course outside New York City, some of which came during his August "working vacation" when he held meeting with Cabinet officials and called world leaders.