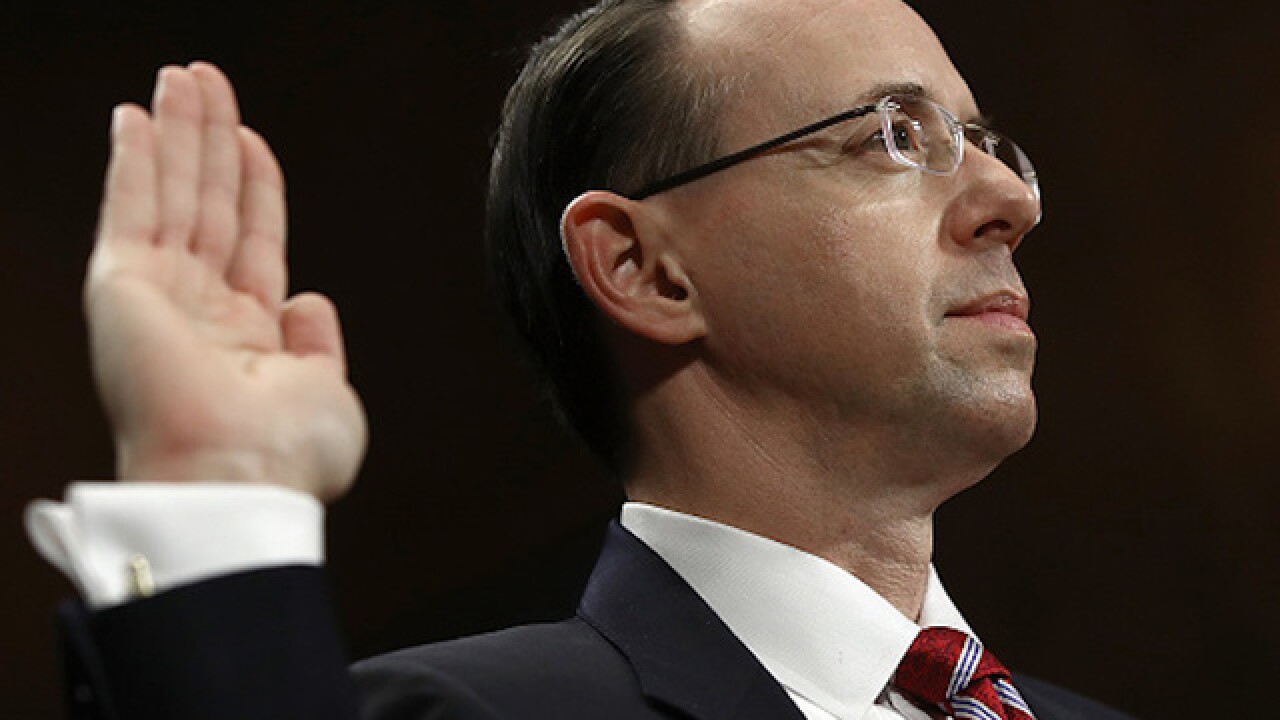 Copyright 2017 Scripps Media, Inc. All rights reserved. This material may not be published, broadcast, rewritten, or redistributed.
Win McNamee
<p>WASHINGTON, DC - MARCH 07: Deputy U.S. Attorney General nominee Rod Rosenstein is sworn in prior to testimony before the Senate Judiciary Committee March 7, 2017 in Washington, DC. During the hearing, Democratic senators pressed Rosenstein to appoint a special prosecutor in an ongoing federal inquiry into Russian influence in the U.S. presidential election. (Photo by Win McNamee/Getty Images)</p>

President Donald Trump is considering firing Deputy Attorney General  Rod Rosenstein , multiple people familiar with the discussions tell CNN, a move that has gained urgency following  the raid of the office of the President's personal lawyer .

Such an action could potentially further Trump's goal of trying to put greater limits on special counsel  Robert Mueller .

This is one of several options -- including going so far as to fire Attorney General  Jeff Sessions  -- Trump is weighing in the aftermath of the FBI's decision Monday to raid the office of Michael Cohen, the President's personal lawyer and longtime confidant. Officials say if Trump acts, Rosenstein is his most likely target, but it's unclear whether even such a dramatic firing like this would be enough to satisfy the President.

Trump has long been angry at top Justice Department officials, who he feels have not done enough to protect him from Mueller's ongoing probe. But two sources said the raid could mark a tipping point that would prompt the President to take more aggressive action against the special counsel.

Firing Mueller could throw Trump's presidency  into crisis and not all of Trump's legal advisers are on board. One source said Rosenstein wouldn't be fired.

But some of Trump's legal advisers are telling him they now have a stronger case against Rosenstein. They believe Rosenstein crossed the line in what he can and cannot pursue. And they consider him conflicted since he is a potential witness in the special counsel's investigation because he wrote the memo that justified firing former FBI Director James Comey. The legal advisers also believe they have successfully argued to the American public that the FBI is tainted and think they can make the same case against Rosenstein.

Meanwhile,  Senate Democrats are preparing for that possibility  and huddled Tuesday to talk about what would happen if Trump fired Rosenstein or Sessions. The Democrats discussed immediately calling for document preservation and how to press Republicans to join them.

There's no guarantee that firing Rosenstein would achieve the President's goal of containing Mueller and his probe. Rosenstein's successor overseeing the special counsel's investigation could follow a similar path.

"I haven't had any conversations with him on that," she said. But she did not close the door, adding: "I can't speak to it beyond that."

She said Trump believes he could fire Mueller if he wanted to.

"He certainly believes he has the power to do so," she said.

The President's animosity towards Mueller reached its highest point yet on Tuesday, a person familiar with the President's thinking said. One source said Trump views the raid on Cohen, which was executed by US Attorney's office for the Southern District of New York and not Mueller, as a ruse and directly related to the special counsel's investigation. According to the source who is familiar with the President's feelings, Trump believes Mueller is "unregulated," with few checks and balances on his conduct.

Other sources who have spoken with the President echoed that sentiment, telling CNN that Trump views the raid on Cohen as Mueller aggressively going after him.

Installing a new deputy attorney general could provide the check on Mueller that Trump is seeking. Sessions recused himself last year from all investigations involving the 2016 election, including the special counsel's probe, a decision that continues to infuriate the President. Sessions' decision left Rosenstein in charge of the Mueller probe.

The President, who had already shortened his itinerary for a planned trip to South America and had been grumbling to aides that he had to go at all, is staying behind in Washington in part to decide his next steps on potential changes at the Justice Department, according to a source. Sanders said Trump was staying behind to oversee a response to the alleged chemical weapons attack in Syria over the weekend.

If Trump were to take action against the Justice Department, some associates have advised him that firing Rosenstein could be his most politically palatable move, while others have warned that dismissing Rosenstein could create outrage on Capitol Hill and beyond.

Sessions remains squarely in the President's crosshairs, as he has for much of Trump's presidency. But White House officials continue arguing against firing him out of fear of a backlash from the Senate and a very uncertain confirmation battle for the next attorney general. Trump, ever the unpredictable president, could always fire Sessions, but a host of Republicans and advisers are urging him not to do it, sources tell CNN.

Trump ignored questions about the ongoing legal drama Tuesday. But in a meeting Monday evening with military brass meant to focus on his options for attacking Syria, Trump unleashed on the Cohen raid.

Trump slammed Sessions for his "terrible mistake" in recusing himself. But it was Rosenstein who Trump faulted by name.

"If you know the person in charge of the investigation, you know about that, Deputy Rosenstein, Rod Rosenstein," Trump said after being asked why he hasn't fired Mueller.

Cohen is deeply connected to Trump and his entanglement in the FBI raid gets as close to the President's inner circle as possible without involving his family.

"Cohen is the closest person to Trump that I have ever met who is not family -- beyond Hope Hicks," a former business associate of Trump's said Monday. "Ever since I have been working with Donald Trump, Michael Cohen has been around."

Trump, according to a source with knowledge of the planning going into the Monday meeting with military brass, was advised not to mention his deliberations over Sessions and Rosenstein beyond expressing general disappointment. But he went off script.

One way Trump is being told he could fire Rosenstein is by blaming his dismissal on the ongoing disagreement between the Justice Department and House Republicans over document production on an array of issues related to how the FBI obtained a surveillance warrant on former Trump campaign aide Carter Page.

Earlier this year, House Speaker Paul Ryan sided with House Intelligence Committee Chairman Devin Nunes in a meeting with Rosenstein and FBI head Christopher Wray over document production, multiple sources with the knowledge of the situation  told CNN  at the time.

Top House conservatives have vented their frustration about the process both privately and publicly and Trump responded over the weekend, tweeting that the disagreement is "not looking good" for the Justice Department.

The Justice Department named Chicago's top federal prosecutor, US attorney John Lausch, to oversee the FBI's production of documents on Monday, hoping that the change would speed up the process and satisfy the Republican lawmakers. But the issue has yet to be fully resolved and the disagreement has played out in conservative media, primarily Fox News, likely drawing the attention of their most powerful viewer: the President.