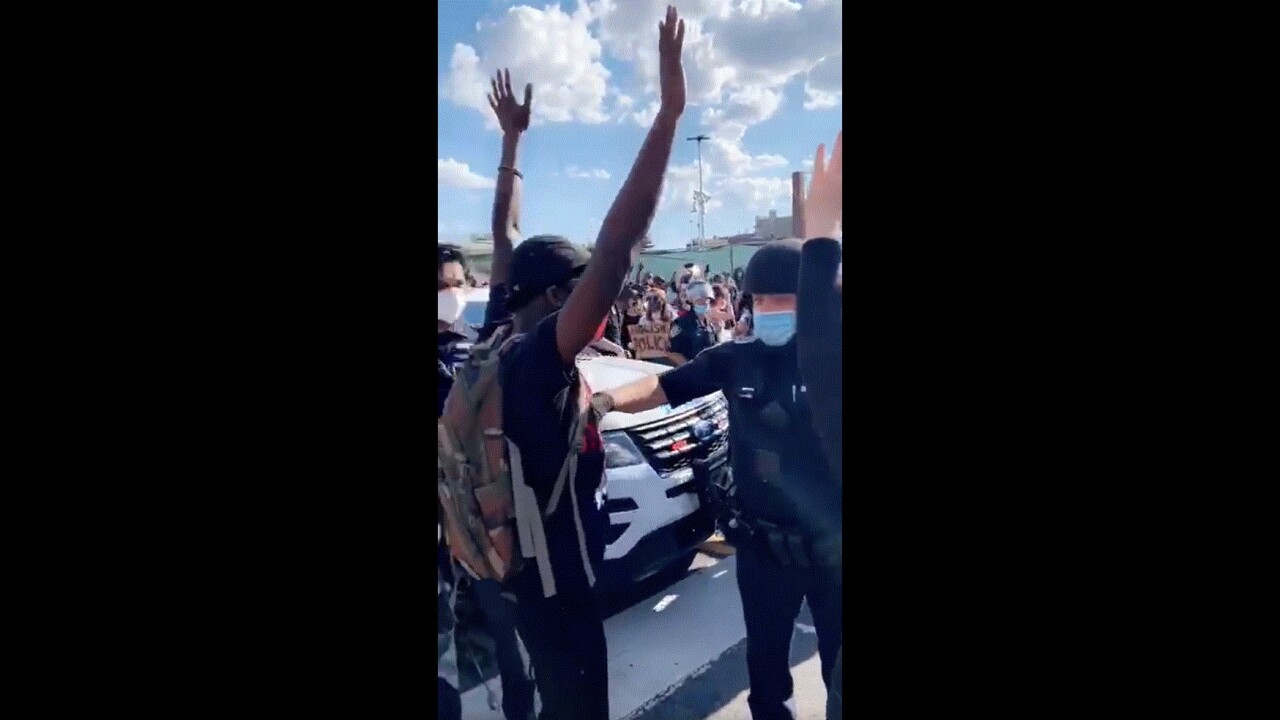 Twitter / Malik Doe
An NYPD officer was captured on video pulling a man&#39;s mask down and pepper spraying him in the face during a protest on Saturday, May 30, 2020.

NEW YORK -- A New York police officer was captured on video Saturday pulling the mask off of a man and pepper spraying him in the face.

The video was taken during a protest in Queens over the Minneapolis police killing of George Floyd.

The man can be seen with his hands in the air as several police officers order protesters to back up off the street. An officer then walks up to the man, pulls his mask down and sprays him directly in the face while the man’s hands are in the air, the video shows.

I am heartbroken and disgusted to see one of my family members a young black man w/his hands up peacefully protesting and an NYPD officer pulls down his mask and pepper sprays him. @NYCSpeakerCoJo @BPEricAdams @FarahNLouis @JumaaneWilliams @NewYorkStateAG @NYPDShea cc: @EOsyd pic.twitter.com/tGK5XWS0bt

The woman who posted the video, Anju J. Rupchandani, said the man is her nephew and another nephew recorded the altercation. She later tweeted a statement from the man’s mother.

“My God. A police officer who tear gases a civilian whose hands are up does a dishonor to his colleagues and his city and needs to be brought to justice,” Johnson tweeted in response to the video.

Inexcusable. My God. A police officer who tear gases a civilian whose hands are up does a dishonor to his colleagues and his city and needs to be brought to justice. https://t.co/zYvEKidJtQ

New York Attorney General Letitia James also encouraged the woman to report the incident to her office so an investigation could be opened into the officer's actions.

Saturday was the third day of protests over Floyd’s death and other police killings across the country.

Clashes between police and protesters have resulted in hundreds of arrests, property damage and an untold amount of injuries on both sides.

On Sunday morning, NYPD Commissioner Dermot Shea released a statement on Twitter also backing police and diminishing the demonstrations to nothing more than “a mob bent solely on taking advantage of a moment in American history.”

“What we saw in New York City last night and the night before was not about peaceful protest of any kind. It was not about civil disobedience. It was not about demonstrating against police brutality,” Shea said, in part . “What it was, quite frankly, was a mob bent solely on taking advantage of a moment in American history, to co-opt the cause of equality that we all must uphold, to intentionally inflict chaos, mayhem, and injury just for the sake of doing so.”

This story was originally published by Lauren Cook at WPIX.