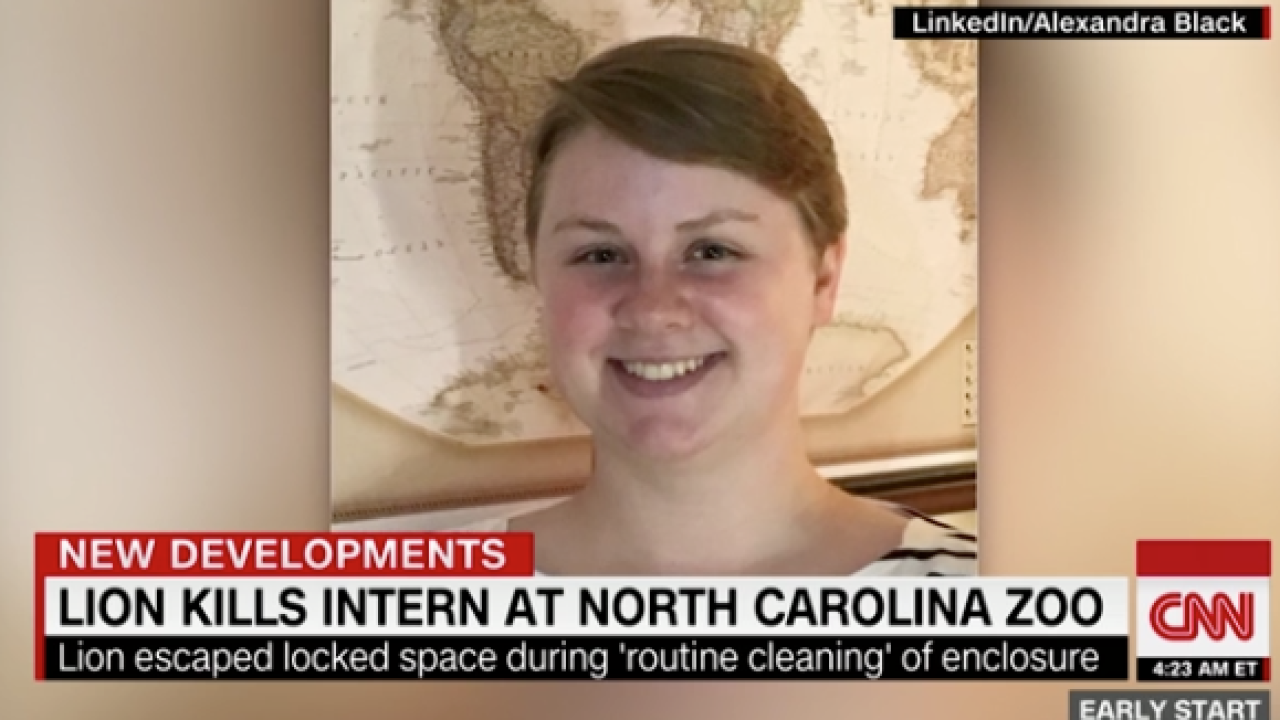 The zoological park intern killed Sunday by an escaped lion in North Carolina "loved animals" and wanted to make a career of working with them, her family says.

Alexandra Black, a 22-year-old recent graduate of Indiana State University, had been an intern at the Conservators Center in Burlington, west of Durham, for about two weeks when she was attacked and killed, the Caswell County Sheriff's Office said.

The center said the lion had escaped a locked enclosure during a routine cleaning.

In a statement obtained by CNN affiliate WXIN Sunday, Black's family said she had died "following her passion."

"Alex loved animals. Our beautiful, intelligent, passionate Alex had worked, unpaid, at several animal-related ventures, most recently at Wolf Park in Battleground, Indiana. This was her fourth internship, because she really wanted to make a career of working with animals," they said.

Black was a native of New Palestine, Indiana, according to the sheriff's office.

She had started working at the Conservators Center -- her first out-of-state internship -- 10 days ago, her family said.

"She was a beautiful young woman who had just started her career, there was a terrible accident, and we are mourning," the family said.

They asked that people consider donating to Wolf Park to honor Black.

The Conservators Center earlier said that a team led by a trained animal keeper had been cleaning the lion's enclosure when the attack took place.

"One of the lions somehow left a locked space and entered the space the humans were in and quickly killed one person," the center said on its Facebook page.

"The Conservators Center is devastated by the loss of a human life today," the center said.

Black's "passion was the zoological industry -- this was not this person's first internship," the center's executive director, Mindy Stinner, said, according to CNN affiliate WNCN.

"And this person wanted to spend a lifetime around these animals," Stinner said in an emotional press conference.

Male lion was shot and killed

The male lion was euthanized, Stinner said. It was unclear how the lion escaped, the center said.

Stinner said all large cats are locked in a separate area from humans during the routine cleanings.

"At no time did the lion ever enter a space that was not enclosed by the park's perimeter fence," she said.

Stinner said visitors were at the park but officials safely and quickly got them out of the park.

"This is not a situation we've ever had before. Safety is a very, very important feature of running any zoological park," she said.

Center is closed until further notice

The zoological park houses more than 80 animals, including tigers, small wild cats and other small carnivores, according to its website. It offers guided walking tours near the animal enclosures. The park is regulated the US Department of Agriculture, according to Stinner.

Stinner, an educator, co-founded the center in 1999 in Mebane, North Carolina, as an educational nonprofit to provide a home for select carnivore species, according to the center's website. It relocated to a 45-acre swath in 2004, the website said.

Stinner said they first started doing rescue and sanctuary work, but moved away from that emphasis and worked with more species, trying to involve the community more.

"We like to think of ourselves as kind of a community zoo," she said.

The center is closed until further notice, officials said.

"We need to assess our situation, and we need to make sure that everyone here is safe and feels safe," Stinner said, "because this is a very scary thing."