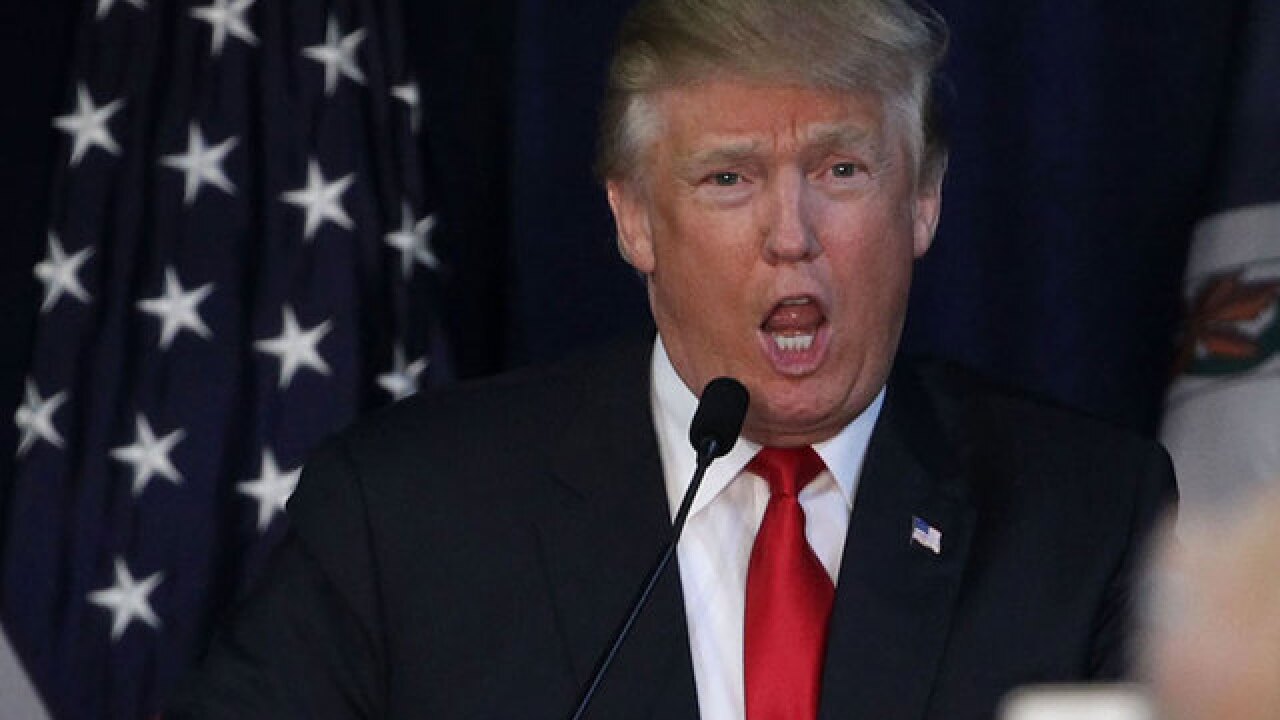 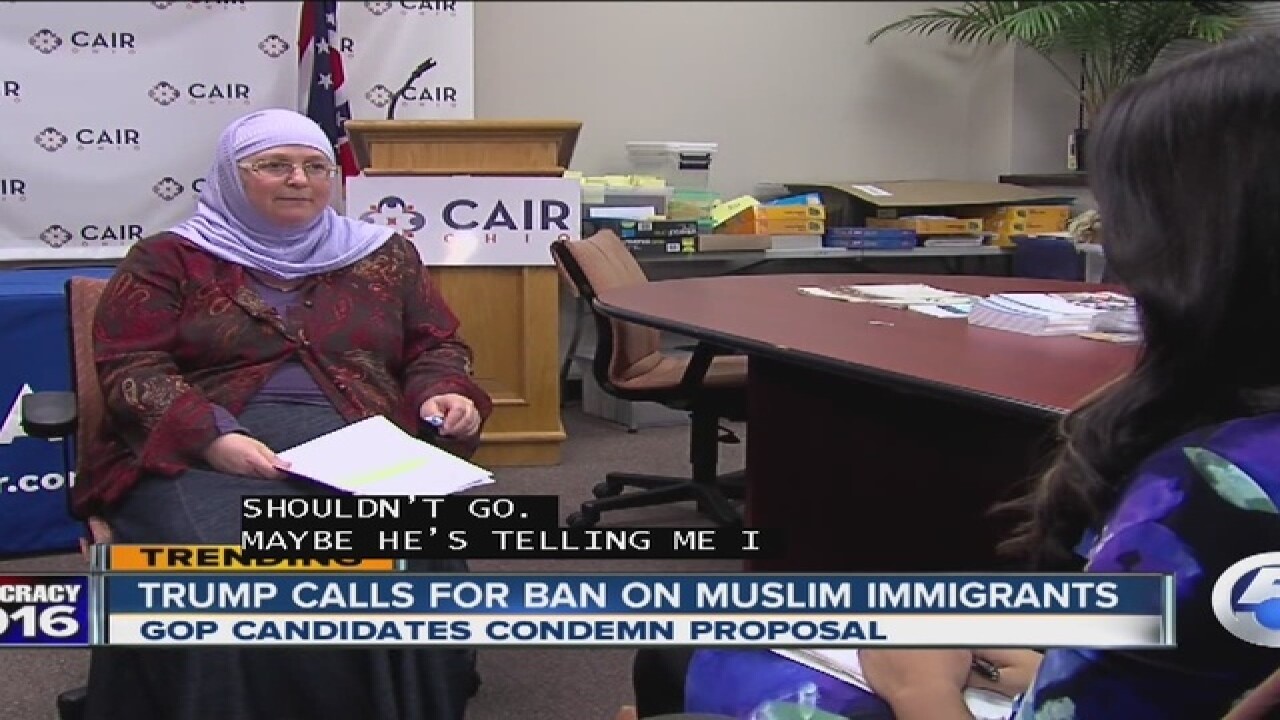 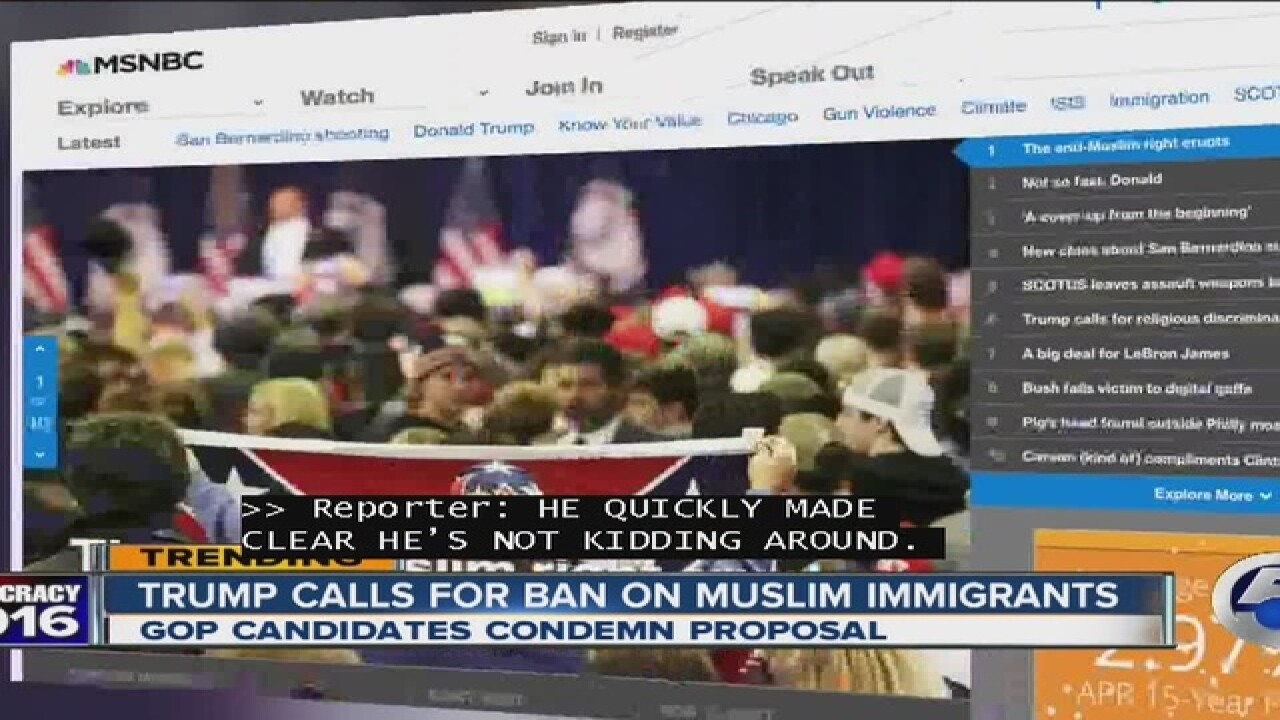 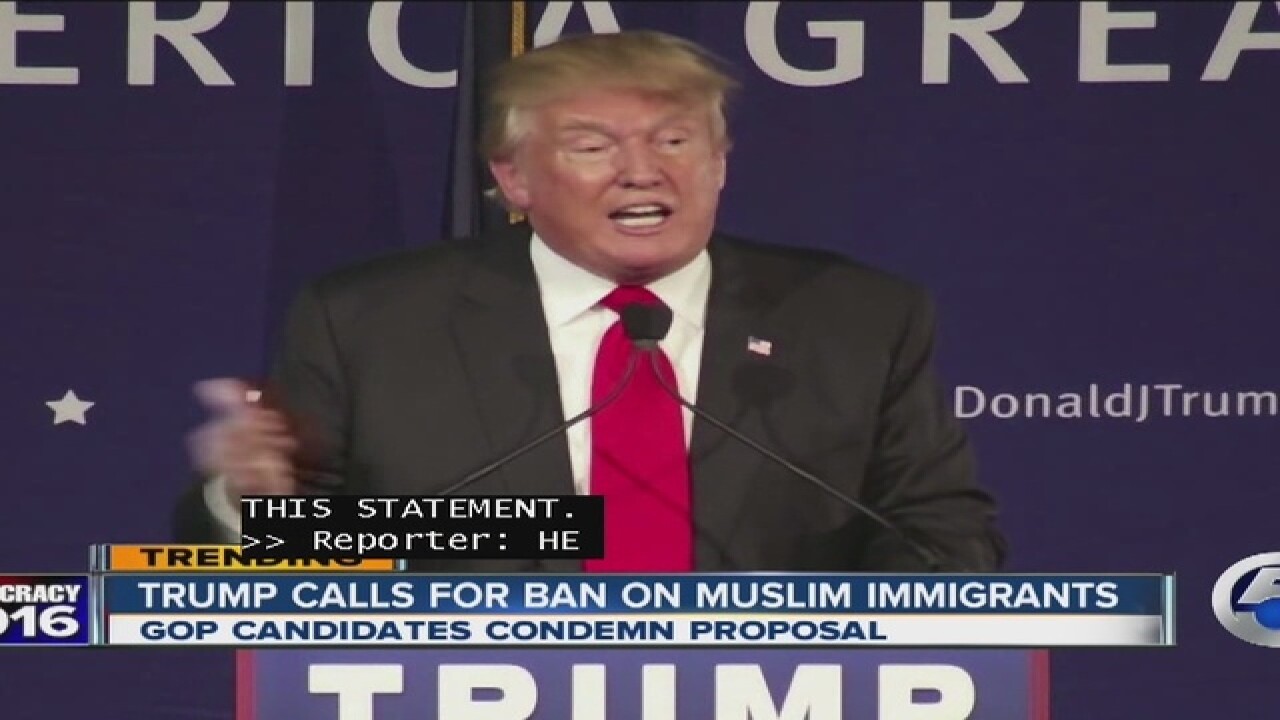 Donald Trump called Monday for a "total and complete shutdown of Muslims entering the United States," an idea swiftly condemned by his rival GOP candidates for president and other Republicans.

The proposed ban would apply to immigrants and visitors alike, a sweeping prohibition affecting all adherents of Islam who want to come to the U.S. The idea also raised immediate questions about its legality and feasibility, as experts could point to no formal exclusion of immigrants based on religion in America's history.

Trump's campaign said in a statement such a ban should stand "until our country's representatives can figure out what is going on."

The statement added that Trump's proposal comes in response to a level of hatred among "large segments of the Muslim population" toward Americans.

"Until we are able to determine and understand this problem and the dangerous threat it poses, our country cannot be the victims of horrendous attacks by people that believe only in jihad, and have no sense of reason or respect for human life," Trump said in the statement.

He added on Twitter: "Just put out a very important policy statement on the extraordinary influx of hatred & danger coming into our country. We must be vigilant!"

Julia Shearson is the executive director for the Council on American-Islamic Relations (CAIR) in Cleveland. She said she was shocked, but not surprised by Trump's latest proposal — and believes it may actually help him.

"The way Mr. Trump is stirring people up gives them a kind of quick fix and a quick solution so unfortunately, I think his poll numbers will certain jump because of this," she said.

"Freedom from religious tests is the main reason early settlers came to this country from Europe," he added.

Trump's Republican rivals were quick to reject the latest provocation from a candidate who has delivered no shortage of them.

John Kasich slammed Trump's "outrageous divisiveness," while a more measured Ted Cruz, who has always been cautious about upsetting Trump's supporters, said, "Well, that is not my policy."

Ben Carson said he would not advocate "being selective on one's religion" but does believe that "Everyone visiting our country should register and be monitored during their stay."

He did not respond to questions about whether it would also include Muslims who are U.S. citizens and travel outside of the country, or how a determination of someone's religion might be made by customs and border officials.

There are, for example, more than 5,800 servicemen and women on active U.S. military duty and in the reserves who self-identify as Muslim and could be assigned to serve overseas.

Trump was also unclear on whether his ban would apply to Muslim allies in the fight against Islamic State militants.

Ari Fleischer, a former aide to Republican President George W. Bush, tweeted, "Under Trump, the King Abdullah of Jordan, who is fighting ISIS, won't be allowed in the US to talk about how to fight ISIS."

But at a Trump rally in Mount Pleasant, South Carolina, on Monday night, the proposed ban struck supporter Shelley Choquette as reasonable, because "It's not going to be forever. I think everybody needs to be checked."

Religion can factor into immigration decisions, but that typically happens when people are fleeing religious persecution. So people of a particular religion may get favorable treatment by the United States, as when Russian Jews sought to leave the Soviet Union.

But experts could cite no blanket prohibition on immigrants based on religion. In the late 1800s, Congress passed legislation broadly aimed at halting Chinese immigration.

"There is no precedent for a religious litmus test for admitting immigrants into the United States," said Leti Volpp, a University of California expert on immigration law.

"Excluding almost a quarter of the world's population from setting foot in the United States based solely upon their religious identity would never pass constitutional muster," Volpp said.

In response to a request for additional detail, Trump said via a campaign spokeswoman: "Because I am so politically correct, I would never be the one to say. You figure it out!"

Trump's proposal comes a day after President Barack Obama spoke to the nation from the Oval Office about the shootings in San Bernardino, California, which Obama said was "an act of terrorism designed to kill innocent people."

The FBI said Monday the Muslim couple who carried out the massacre had been radicalized and had taken target practice at area gun ranges, in one case within days of the attack last week that killed 14 people.

Trump's campaign has been marked by a pattern of inflammatory statements, dating back to his harsh rhetoric about Mexican immigrants.

He has taken a particularly hard line against Muslims in the days since the Paris attacks, advocating enhanced surveillance of mosques due to fears over radicalization.

White House spokesman Josh Earnest accused Trump of playing on people's fears and trying to tap into "a darker side, a darker element" of American society.

From the Democratic presidential campaign, Bernie Sanders said "Trump and others want us to hate all Muslims" and Hillary Clinton called the proposal "reprehensible, prejudiced and divisive."

But will it hurt Trump in the campaign? "I have no idea," McCain said. "I thought long ago that things he said would hurt his prospects, and he continues to go up."