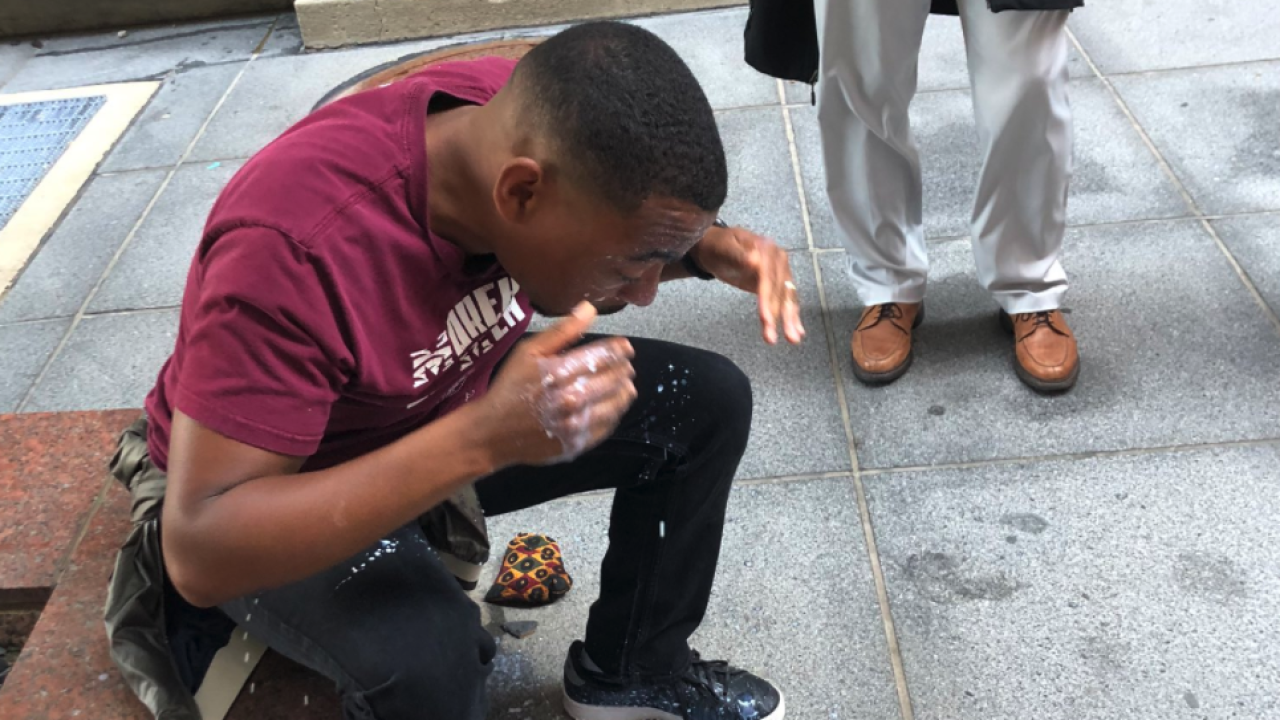 COLUMBUS, Ohio — Columbus City Council President Shannon Hardin, Congresswoman Joyce Beatty and Franklin County Commissioner Kevin Boyce are calling for peace from both police and protesters after they were sprayed with either mace or pepper spray during Saturday’s demonstration.

Hardin, Beatty and Boyce said they are all doing okay and Hardin was grateful to a good Samaritan who provided him milk to wash out the spray.

Just want to let folks know that when @RepBeatty @VoteBoyce and I were down at the protest we did get sprayed with mace or pepper spray. We are all ok, and we want to encourage folks, both police and protestors, to stay calm. pic.twitter.com/RDQ1p4YDRY

Hardin said they know tensions are high but encourage protesters to keep calm when out demonstrating.

Beatty said that most of the protest was peaceful but a small part got slightly out of hand. She said that the protest was well organized for “99% of it” and was proud of their march and the signs created to spread their message of change, but reiterated that too much force is not the answer.

“We came out to support them and be with them and it was just something in my heart thinking about George Floyd, thinking about all of the injustices, that I needed to be out there thinking I was protecting them,” Beatty said. “And it probably was not safe but I am so proud of my colleagues, I’m so proud of all the young folks and we want to continue to protest but it must be peaceful.”

The congresswoman said that holding peaceful protests and avoiding force does not equate to not standing up for justice and that peaceful demonstration can make a difference.

Boyce said the leaders attend the protests to establish their voices against racism and for peace.

The county commissioner said that it only takes one or two individuals to turn a peaceful protest into a violent or destructive demonstration.

The protests against police violence and the death of George Floyd have been continuous in Columbus since Thursday night. On the first night of demonstrations, the protests began peacefully but were escalated after water bottles began being thrown and police responded by using tear gas on the crowd.

Gov. Mike DeWine issued the following statement on Friday in regards to the death of Floyd, the 46-year-old man who died on Memorial Day after a police officer knelt on his neck for several minutes as he gasped for breath with his face against the pavement in Minneapolis:

George Floyd’s death is the culmination of many events. As he lay on the ground dying, he was a victim representing so many others before him. His death impacts us all. We have a responsibility to each other, regardless of race, to stand up & say we won't tolerate this conduct.

I want to make sure that, as Governor of Ohio, I say to every African American man, woman, and child - you are valued and an essential part of this community.

I acknowledge that I hear the voices of frustration. I receive those words and emotions with empathy and a commitment to seek solutions and justice when it is denied.

On Saturday evening, DeWine called in the National Guard to help protect the citizens of Ohio.

I am now calling to service the @OHNationalGuard to help protect the citizens of Ohio. Further, at the request of @MayorGinther and the @ChiefQuinlan, I am ordering the @OSHP to also help enforce the criminal laws in Columbus.

RELATED: VIDEO: Protesters and police clash in Cleveland during demonstration