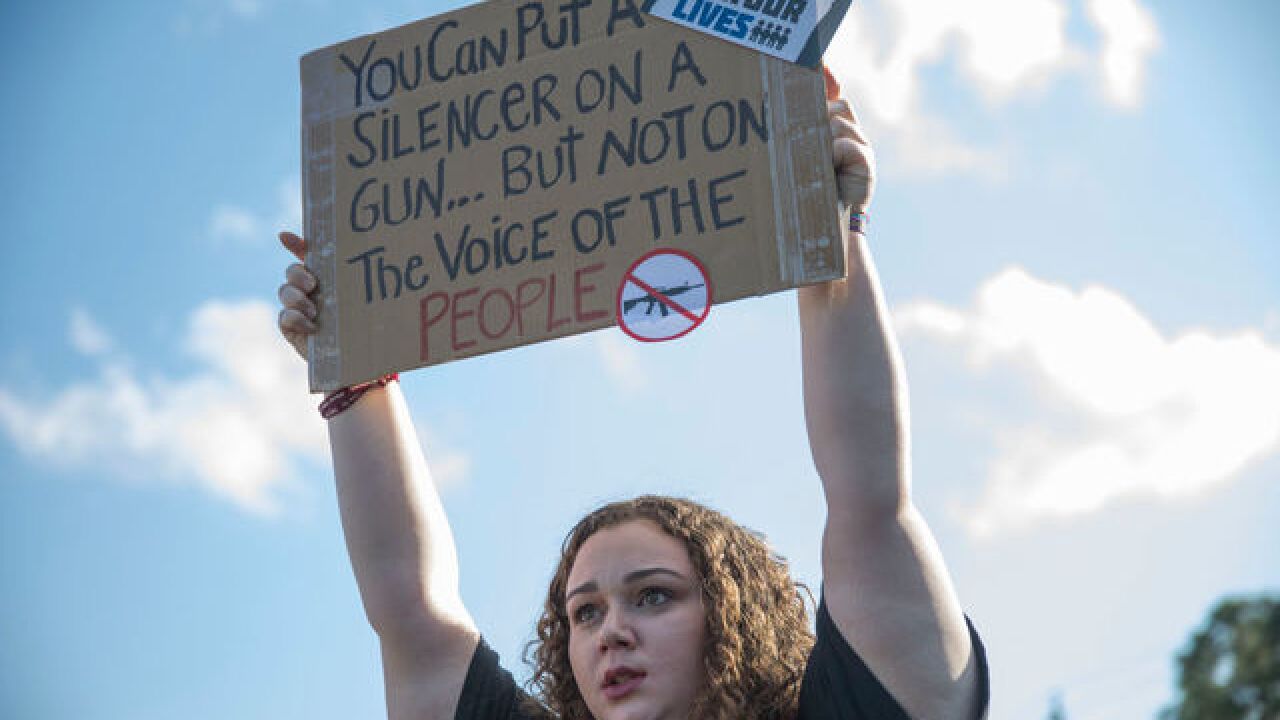 Copyright 2018 Scripps Media, Inc. All rights reserved. This material may not be published, broadcast, rewritten, or redistributed.
Joe Raedle
<p>PARKLAND, FL - MARCH 20: Sophie Phillips holds a sign as she attends a rally for those heading to the March for Our Lives event in Washington D.C. on March 20, 2018 in Parkland, Florida. The rally was held in the name of the 17 students and school staff killed on Valentines Day at Marjory Stoneman Douglas High School. (Photo by Joe Raedle/Getty Images)</p>

Saturday is the March For Our Lives demonstration in Washington, D.C. The event will bring together people from all over the world to protest gun violence and to call on legislators to enact stricter gun laws.

Demonstrators will rally in the wake of the Feb. 14 shooting at Marjory Stoneman Douglas High School in Parkland, Florida.

The main march will begin around noon on Saturday on Pennsylvania Avenue, just blocks away from the Capitol. Sister marches will take place across the country as protesters join the movement.

More information about the March For Our Lives petition can be found here.

According to the March for Our Lives website, the movement has three  main goals:

1. Passing a law to ban the sale of assault weapons like the ones used in Las Vegas, Orlando, Sutherland Springs, Aurora, Sandy Hook and, most recently, to kill 17 innocent people and injure more than a dozen others at Marjory Stoneman Douglas High School.

Of the 10 deadliest shootings over the last decade, seven involved the use of assault weapons.

No civilian should be able to access these weapons of war, which should be restricted for use by our military and law enforcement only. These guns have no other purpose than to fire as many bullets as possible and indiscriminately kill anything they are pointed at with terrifying speed.

2. Prohibiting the sale of high-capacity magazines such as the ones the shooter at our school—and so many other recent mass shootings used.

States that ban high-capacity magazines have half as many shootings involving three or more victims as states that allow them.

Limiting the number of bullets a gun can discharge at one time will at least force any shooter to stop and reload, giving children a chance to escape.

3. Closing the loophole in our background check law that allows dangerous people who shouldn’t be allowed to purchase firearms to slip through the cracks and buy guns online or at gun shows.

RELATED:  The 'March For Our Lives' is Saturday: Here's what to know about it

Even though the main march is in Washington, anyone wanting to show their support locally can head to a nearby march on Saturday. There are a total of 835 marches worldwide planned for Saturday.

Here is a list of marches in Northeast Ohio: