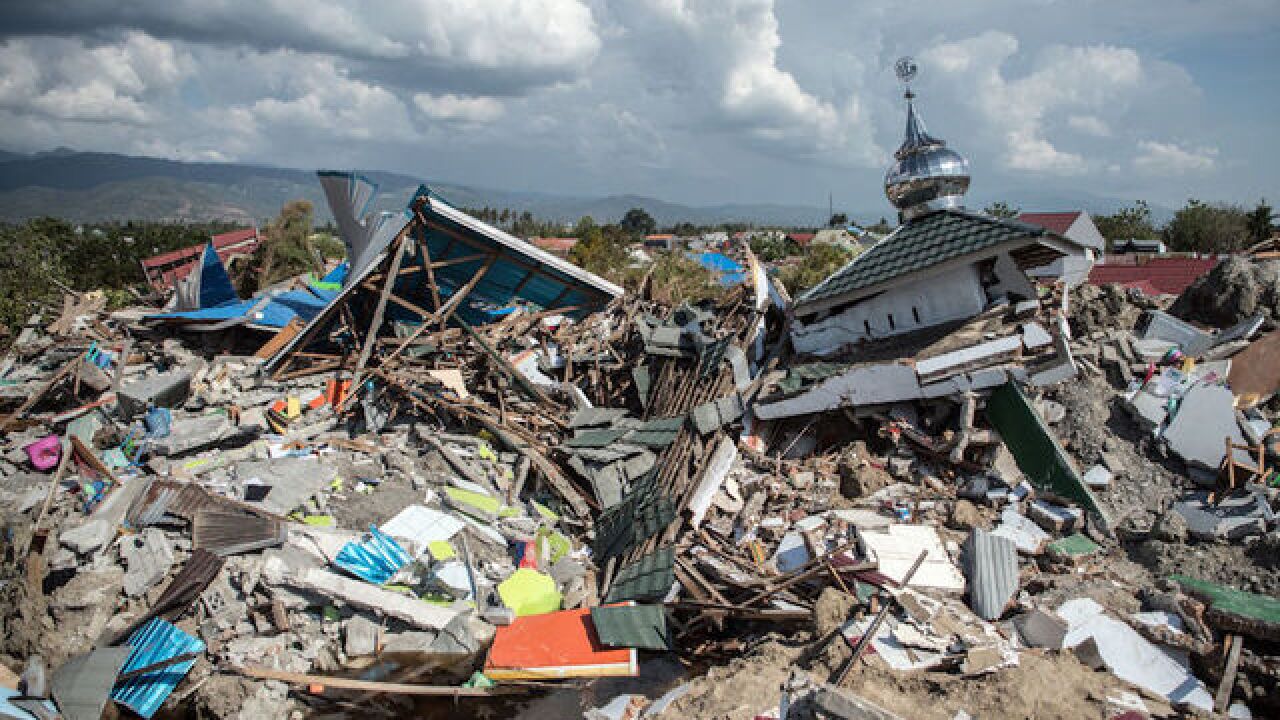 Image copyright 2018 Getty Images. All rights reserved. This material may not be published, broadcast, rewritten, or redistributed.
Carl Court
<p>Rubble and debris lie around the ruins of a mosque following an earthquake, on October 02, 2018 in Palu, Indonesia. Indonesia’s disaster response agency confirmed on Tuesday that the death toll from Friday’s earthquake and tsunami has reached at least 1,234 people while fears that the death toll could rise again. A tsunami triggered by a magnitude 7.5 earthquake slammed into Indonesia's coastline on the island of Sulawesi as people are increasingly growing desperate for food, fuel, and water, while emergency services fear that survivors may still be trapped under the rubble. </p>

There could be just days left to rescue the remaining trapped survivors of Friday's earthquake and tsunami, Indonesia's disaster agency said Wednesday, as the already-high death toll continued to grow.

But a volcanic eruption just north of the disaster zone, the third severe tectonic event in Indonesia in less than a week, has highlighted the difficult task facing authorities in the geographically unstable region.

Mount Soputan, in the northern part of the island of Sulawesi, erupted just before 8 a.m. on Wednesday (9 p.m. Tuesday ET), according to Indonesian disaster agency spokesman Sutopo Purwo Nugroho.

The ash cloud rose four kilometers high over the devastated island, but so far the local airport remains open and no evacuations have been required, Sutopo said.

The eruption hasn't yet slowed rescue efforts in Palu, where Sutopo said authorities were only just within the seven-day window in which there is a chance survivors "still exist."

It gives rescue crews less than two days to finish combing the rubble for possible signs of life.

The death toll jumped again on Wednesday, rising to 1,407 amid warnings from authorities that the casualty count is expected to rise even further as search efforts continue.

"So many bodies haven't been recovered yet," Willem Rampangilei, head of Indonesia's National Board for Disaster Management, told reporters on Tuesday.

Widodo calls for return to normality

Aid has begun to trickle in to the devastated Indonesian communities left with nothing after the earthquake and tsunami that struck central Sulawesi on Friday.

In total, an estimated 2.4 million people have been affected by the disasters, including 61,000 who have been left homeless, according to the BNPB.

Ten public kitchens have been set up to deliver food packs to survivors, with food delivered by plane and by sea. So far offers of aid have arrived from 29 different countries, including the United States and Australia.

Indonesian President Joko Widodo touched down again in Palu on Wednesday for his second visit to the disaster zone since the earthquake on Friday.

Speaking following his arrival, Widodo said he wanted to restore basic services to central Sulawesi before beginning the slow process of rehabilitation and reconstruction.

"The most important thing ... is to bring economic activities back to normal until people's daily lives can go back to normal," he said.

Some of the first Indonesian vessels containing aid and supplies pulled into the the port of Palu, transferring much-needed food, water and logistical equipment to shore.

The aid is long overdue in the devastated Indonesian city. On Tuesday, National Police spokesman Setyo Wasisto said that 49 people have been arrested for theft after reports of looting following the disaster.

Was the earthquake triggered by the volcano?

Indonesia sits between two continental plates on what is known as the Ring of Fire, a band around the basin of the Pacific Ocean that leads to high levels of tectonic and volcanic activity.

Wednesday's eruption isn't even the first seismic event to hit Indonesia following the devastating earthquake and tsunami on Friday. A separate 6.0-magnitude tremor struck the island of Sumba, close to Bali, on Tuesday morning.

No one was reported injured and the earthquake didn't distract emergency services from the ongoing situation in Palu, but it was another stark reminder of Indonesia's volatile location.

The volcano alert level was raised to three in Sulawesi following the eruption, two notches below the highest level on the Indonesian eruption scale. Authorities have laid out a danger zone within a four-kilometer radius, but so far there has been no need for evacuations.

But despite the volcano's relatively small impact, compared to Friday's disaster. some experts have questioned whether the two events could be directly related.

Scientists say that the devastating sequence of natural disasters was the result of a highly unusual series of geological events, which may be related to the eruption on Wednesday of the Soputan volcano.

According to Synolakis, volcanic eruptions are very often preceded by swarms of earthquakes, which are typically smaller than magnitude-5.

"It is all beginning to look like a Hollywood movie scenario," added Synokalis. "A (7.5-magnitude) earthquake with a mechanism not usually associated with tsunamis triggers a big one, and volcanic activity at a distance from the earthquake far larger than usually expected for causation."