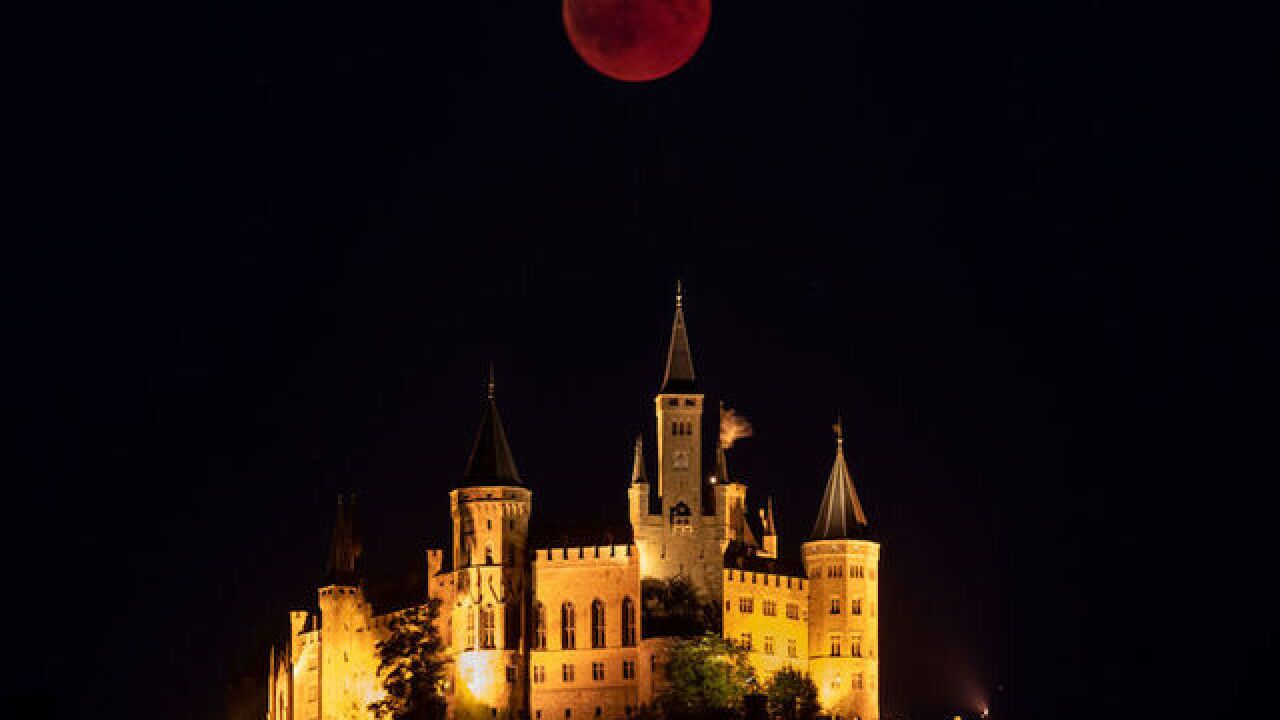 Image copyright 2018 Getty Images. All rights reserved. This material may not be published, broadcast, rewritten, or redistributed.
Matthias Hangst
<p>A Blood Moon rises behind The Hohenzollern Castle, the ancestral seat of the Prussian Royal House and of the Hohenzollern Princes, situated at the periphery of the Swabian Alb on July 27, 2018 in Hechingen, Germany. The period of totality during this eclipse, when Earth's shadow is directly across the moon and it is at its reddest, will last 1 hour, 42 minutes and 57 seconds, making it the longest viewable lunar eclipse this century. </p>

The longest total lunar eclipse of the century concluded Friday night, showcasing a blood moon for most of the Eastern Hemisphere. Coincidentally, Mars was also at its brightest, putting two bright red objects in the sky.

It began in Australia and Indonesia, and it moved across the globe. The lunar eclipse ended around 7:30 p.m. ET. The totality of the lunar eclipse lasted about an hour and 43 minutes, but the partial eclipse before and after the total phase meant the moon spent nearly four hours crossing the Earth's shadow.

The lunar eclipse happened during daylight hours for those in the Western Hemisphere, so people in North America missed it.

Lunar eclipses can occur only during a full moon, and this one was extra special because it was also the blood moon. The moon was in perfect alignment with the sun and Earth on Friday, with the moon on the opposite side of the Earth from the sun.

As the full moon moved into Earth's shadow, it darkened, but it didn't disappear. Sunlight passing through Earth's atmosphere lit the moon in a dramatic fashion, turning it red.

"The moon is not always in perfect alignment with the sun and the Earth, so that is why we do not get a lunar eclipse every lunar cycle," Brad Tucker, an astronomer with the Australian National University's Research School of Astronomy and Astrophysics, said in a statement. "You will see the sunrise and sunset of the Earth lighting up the surface of the Moon -- over 350,000 km away. If you were on the Moon, you would see a total solar eclipse as the Earth would be blocking the Sun."

This full moon in July was also known as the Full Buck Moon and the Thunder Moon, occurring when a male deer's antlers are in full growth and at a time of frequent thunderstorms, according to the Old Farmer's Almanac. It was also a "mini-moon" because the moon was the farthest from Earth and appears small. The fact that the moon appeared so small and took longer to pass through Earth's shadow was also why the eclipse lasted longer.

People in Australia, New Zealand, Europe, Africa and Asia had the best view. The final stages of the eclipse after sunset were be visible in parts of South America.

Dennis Doucet climbed a mountain behind his house in hopes of getting some photos of the full blood moon rising over Osaka, Japan, on Friday night. He captured a photo of an airplane flying in front of the moon as it came in to land.

And Aan Burhany captured a yellowish shot of the lunar eclipse in Jakarta, Indonesia.

EarthSky.org had a map showing more exact locations, and TimeandDate.com had timings based on your location.

North America, much of the Pacific Ocean and most of the Arctic didn't see a thing. The entire United States won't be able to see a full lunar eclipse again until January.

The Virtual Telescope Project shared a livestream of the lunar eclipse and Mars at its brightest just a few degrees apart above the skyline of Rome.

And unlike solar eclipses, especially the total solar eclipse in August 2017, the lunar eclipse was safe to view with the naked eye or binoculars.

Mars in the sky

Our red moon had some company Friday, when Mars was the closest it's been to Earth in 15 years.

While Mars was overhead for people in central Chile, South Africa and Australia, it was low in the southern sky for those who watched in the United States and Europe.

"Despite its glorious girth, northern observers will pay a price during this juicy Mars apparition," Sky & Telescope contributing editor Bob King said. "At most perihelic oppositions, including this one, the planet retreats to the belly of the ecliptic low in the southern sky."

Mars was actually at its closest approach since 2003 on Monday and Tuesday, when it was 35.78 million miles away. Experts estimate that Mars' brightness will persist for several weeks.