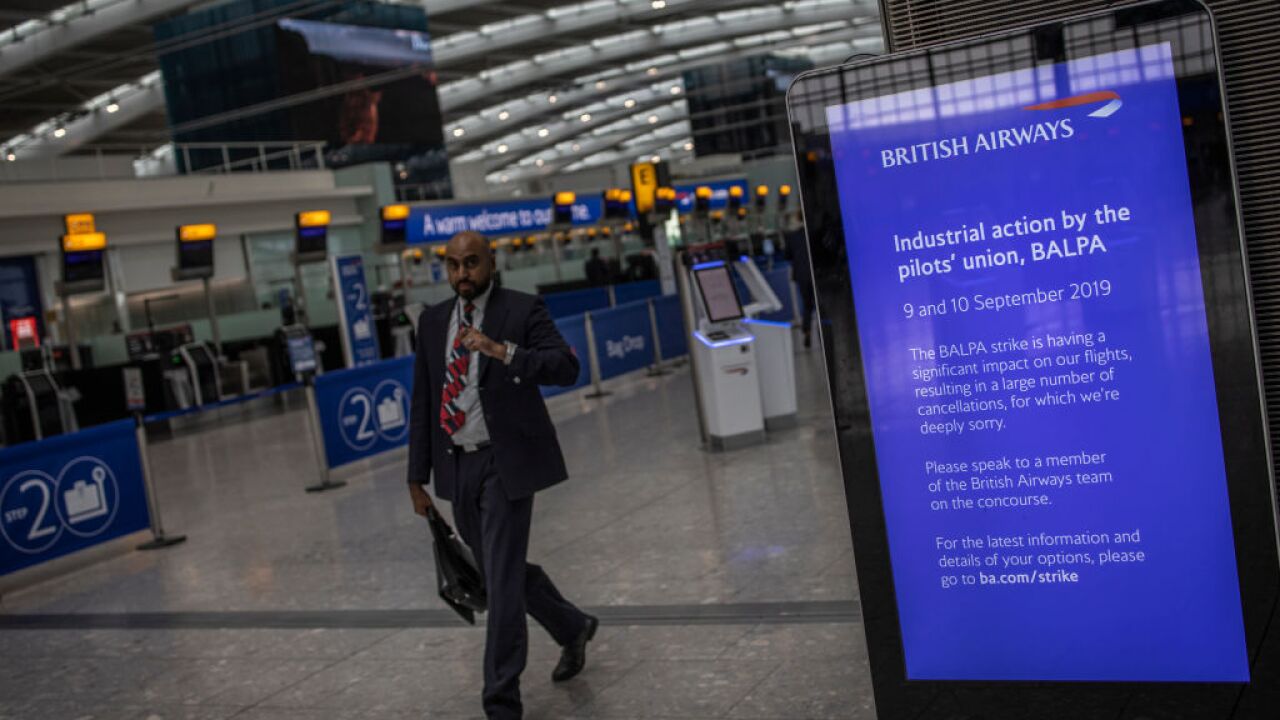 British Airways was forced to cancel virtually all flights for Monday and Tuesday after its pilots went on strike for the first time in the airline's history.

The strike was called by the British Airline Pilots Association (BALPA) amid a heated dispute over pay with the airline.

Nearly 200,000 passengers were due to travel on September 9 and 10, a BA spokesperson told CNN Business.

Pilots are unhappy with BA's offer of an 11.5% salary increase over three years. They want a greater share of the airline's profit.

Pilots had put forward "detailed proposals" in November 2018 for a profit sharing arrangement that would apply to all airline staff, BALPA general secretary Brian Strutton told the BBC on Monday. Having "shared in the pain" when BA went through bad times, pilots wanted a "fair share" of the profit, Strutton said.

This would be up to 7% of pay in good times and zero when times were tough, he said. It would not involve an increase in base pay.

BA said other labor unions, representing nearly 90% of all BA staff, including engineers, cabin crew and ground staff, had accepted the 11.5% increase.

What it means for passengers

Passengers due to fly on September 9 and 10 are highly unlikely to be able to travel as planned. The airline advised them not to go to the airport.

BA said it would offer "as many customers as possible" — including those connecting from flights with other airlines — the option to rebook on other airlines, or have their flights refunded.

Knock-on effects were expected to cause some disruption to flights later this week, a spokesperson said.

BALPA is planning another strike for September 27. The airline said it would contact passengers traveling on that date if their flight is likely to be impacted.

Passengers should keep checking the BA website for updates.

What it means for BA

The cost of the strike would be around £40 million ($49 million) per day, according to BALPA. The three strike days already scheduled would cost in the region of £120 million ($148 million).

The airline said it was forced to cancel so many flights because "with no detail from BALPA on which pilots would strike, we had no way of predicting how many would come to work or which aircraft they are qualified to fly."

Members of the pilots union voted 93% in favor of a strike in July. BALPA said last week that it would be willing to call it off if British Airways returned to the negotiating table.