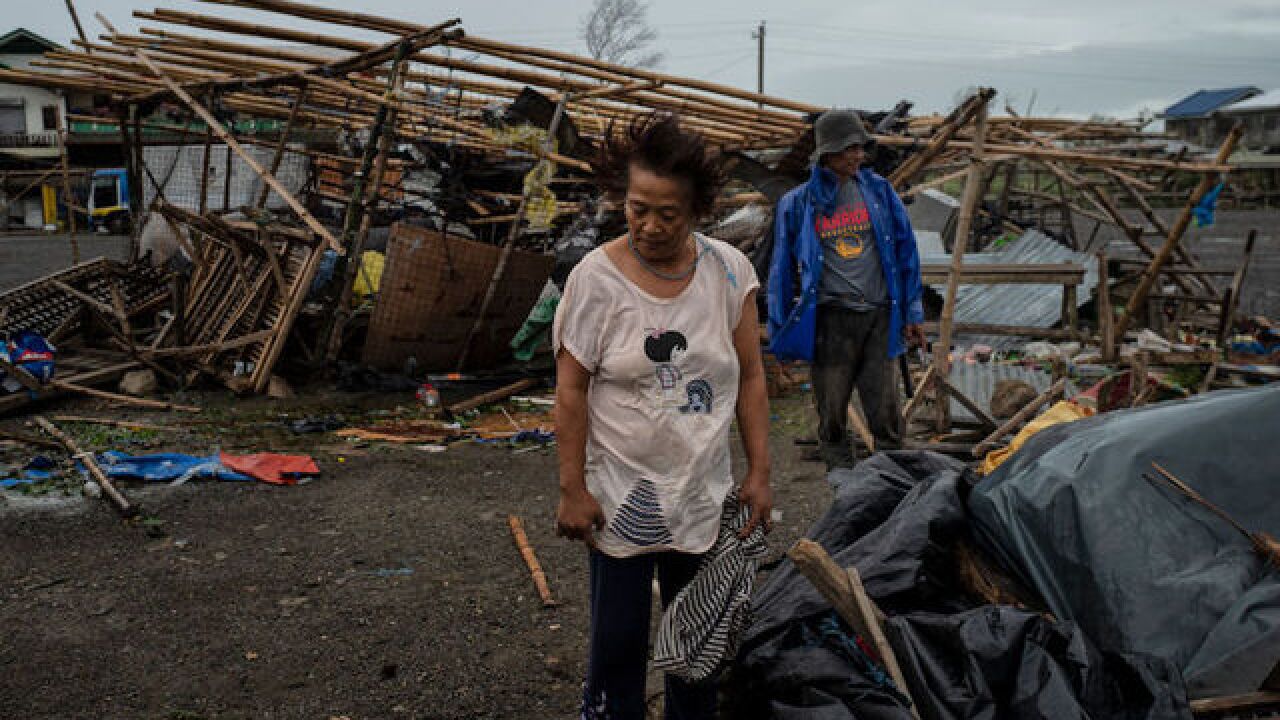 Image copyright 2018 Getty Images. All rights reserved. This material may not be published, broadcast, rewritten, or redistributed.
Jes Aznar
<p>Residents inspecting their damaged property on September 15, 2018 in Alcala, Philippines. Typhoon Mangkhut battered northern Philippines as it made landfall Saturday morning.</p>

Hundreds of houses have been destroyed and at least 36 people are feared buried under thick mud in the Philippines after Super Typhoon Mangkhut triggered a massive landslide in the country's north.

Rescue workers have been working to retrieve survivors in the mining town of Itogon, in Benguet, where at least 35 people have died, many of whom are thought to be miners and their families.

"As of now, we are still looking for the 36 still missing individuals that are still unverified," Lt.Gen Emmanuel Salamat of the Philippines Armed Forces told CNN Philippines on Monday.

Many of the victims were believed to have sought refuge in a church during the typhoon.

"They were advised to move out because that is a hazardous area during typhoons, it might kill them and it really happened," said Salamat.

Mohammed Abdiker, director of operations and emergencies for the UN Migration Agency, says as many as 50 people could have been buried. Drone images from the scene provided by the agency showed a scar on the mountain where mud appears to have wiped out homes.

'Losing our will to live'

More than 24 hours after Typhoon Mangkhut slammed into the Philippines, the full extent of the damage has still yet to be determined.

In the northern coast of Luzon excavated families began the painful process of returning home.

On Sunday, Adelfa Lunato and her family arrived back at their tiny fishing village. The scene was startling. The modest house that she shared with her parents and grandmother was in pieces. The walls had crumbled and only the thin, wooden frame remained.

"It was so devastating to see that our house was destroyed," said Adelfa. "We were all crying. Seeing this damage for the first time, it was like losing our will to live."

This coastal area, in northern Cagayan province, was hit by the most intense part of what was the biggest, most ferocious storm to have occurred anywhere on the planet this year. Residents had been warned of a possible storm surge and flooding, and were urged to evacuate. But it was the wind that caused the most damage to homes and infrastructure here.

Adelfa and her family are now living with a neighbor. Her father is a fisherman and her mother a fishing vendor. They don't have the money to rebuild, she says. "In our mind, how do we start again? What do we do? We know we have to be strong... but it is so painful to see what happened here."

Philippines officials say Cagayan is one of the provinces worst affected by the storm. Super Typhoon Mangkhut, also known locally as Ompong, made landfall in the town of Baggao in the country's northeast in the early hours of Saturday morning, unleashing gusts of up to 325 kilometers per hour (200 mph).

The damage was extensive. Efforts are still underway to restore power and electricity across much of the region.

In the coastal town of Buguey, 54-year-old Rosbin Martin recalls the frightening hours when the storm passed over her family's house and ripped part of the roof off. "The wind was getting faster, stronger," she says. "Water was already inside, up to my shins." She had refused an order to evacuate.

She and fellow Buguey resident Arthur Pagador agree that this was the worst storm they'd seen in this typhoon-prone area, which was last hit by a super typhoon -- Haima -- just two years ago.

Pagador, 68, and his grandchildren waited this storm out in the town hall -- fearful for their lives.

"You could just hear the noise outside, as if there were trucks going around with their engines on full swing," he says. "That's how strong the wind was. We went out at about 5'o'clock in the morning and the first thing we saw was that the gymnasium that had collapsed. There were rooftops blown away."

Cagayan is an important agricultural area and authorities fear there could be widespread crop damage.

Farmers desperately harvested their crops the day before the storm hit, saving whatever they could.

"The farms are flooded, and if rice is submerged in water none of it can be harvested," Rodel Rieta, 46, says as he leans against his pick-up truck. "I know it's going to be a harder life now," he says.

Officials say an estimated 147,540 families, or more than half a million people were affected across 433 cities and municipalities.

In Cagayan, aid agencies say that early evacuations may have saved lives.

At morning mass at the Divine Mercy Church in Tuguegaro, the priest opened in praise: "We have so much to be thankful for," he told his parishioners, "for we survived the Super Typhoon."