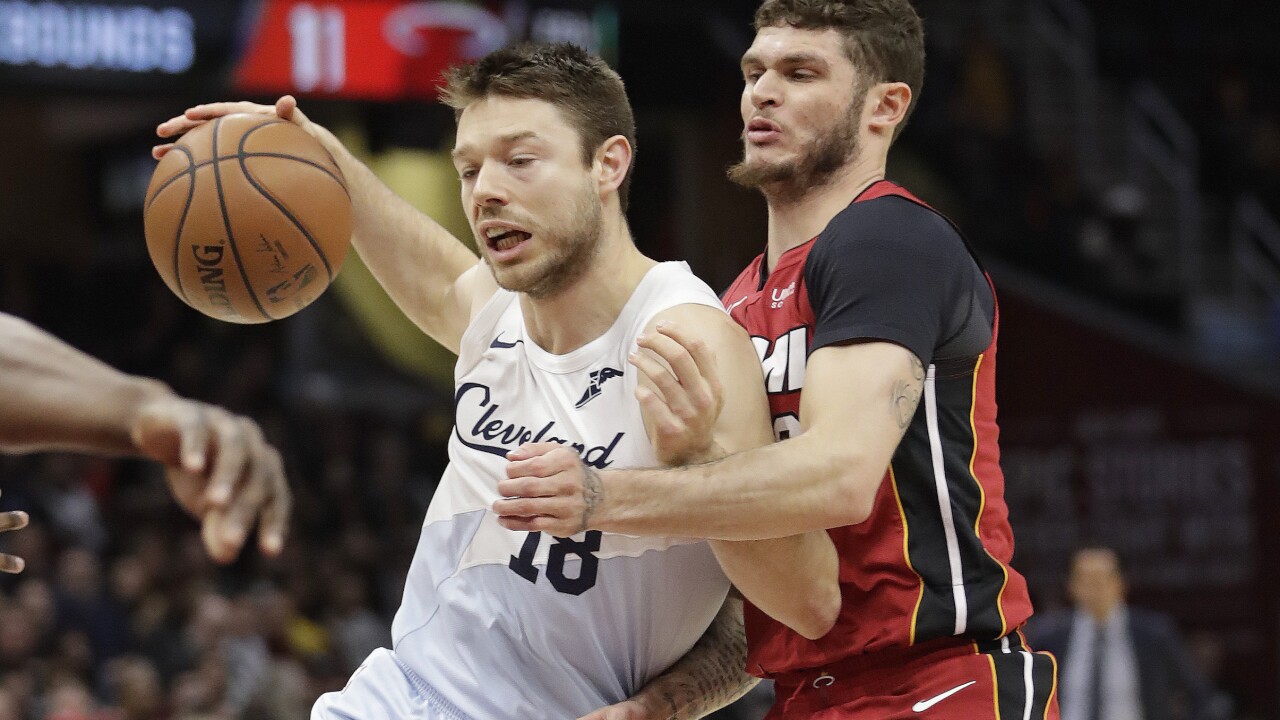 (Copyright 2020 The Associated Press. All rights reserved. This material may not be published, broadcast, rewritten or redistributed.)
Tony Dejak/AP
Cleveland Cavaliers' Matthew Dellavedova, left, drives past Miami Heat's Tyler Johnson in the first half of an NBA basketball game, Wednesday, Jan. 2, 2019, in Cleveland. (AP Photo/Tony Dejak)

Josh Richardson scored 24 points and the Miami Heat — playing without Dwyane Wade — rolled past the Cleveland Cavaliers 117-92 on Wednesday night.

Wade missed the game because of an illness, but the Heat cruised without their third-leading scorer. Miami hit 16 of 31 3-pointers.

Cleveland dropped to 8-30 — the worst record in the NBA — with its seventh straight loss.

Tristan Thompson and Rodney Hood returned from injuries and started for the Cavaliers, but it mattered little in their ninth loss in 10 games. Thompson had 14 points, and Hood added 13.

The Heat grabbed control in the second quarter, turning a one-point deficit into a 17-point lead. Jones scored 11 points in the period while Dion Waiters, playing in his first game in over a year, had seven points in six minutes.

Miami outrebounded Cleveland 25-9 in the first half. Heat center Hassan Whiteside had nine boards, matching the Cavaliers’ total for the first two quarters.

Cleveland led 30-29 early in the second when Miami took over. The Heat hit six 3-pointers in the quarter, including three by Jones. Waiters added a 30-footer while Richardson and Tyler Johnson also hit from beyond the arc.

Miami led 58-43 at halftime and continued to pad the margin. Whiteside scored on an alley-oop from James Johnson, who added a pair of 3-pointers. Richardson’s 3-pointer at the buzzer pushed the lead to 93-73.

Wade is averaging 14.1 points in 27 games in his 16thand final season. He played in 46 games last season with Cleveland, where he was reunited with LeBron James, before being traded to Miami. Wade is one 3-pointer shy of 500 for his career.

Cleveland coach Larry Drew said forward Kevin Love, who had surgery on his left foot in November, has begun shooting drills, but has yet to practice. The team doesn’t have a definitive timeline for when Love will return, but it’s hoped he’s back later in the month.

Drew said Love will visit a doctor soon as he continues to rehab his injury. .

Heat: Richardson has hit multiple 3-pointers in a career-high 12 straight games. He was 4 of 7 against Cleveland. ... Waiters hadn’t appeared in a game since Dec. 22, 2017 when he injured his left ankle and had surgery in January of last year. He played for Cleveland from 2012-15.