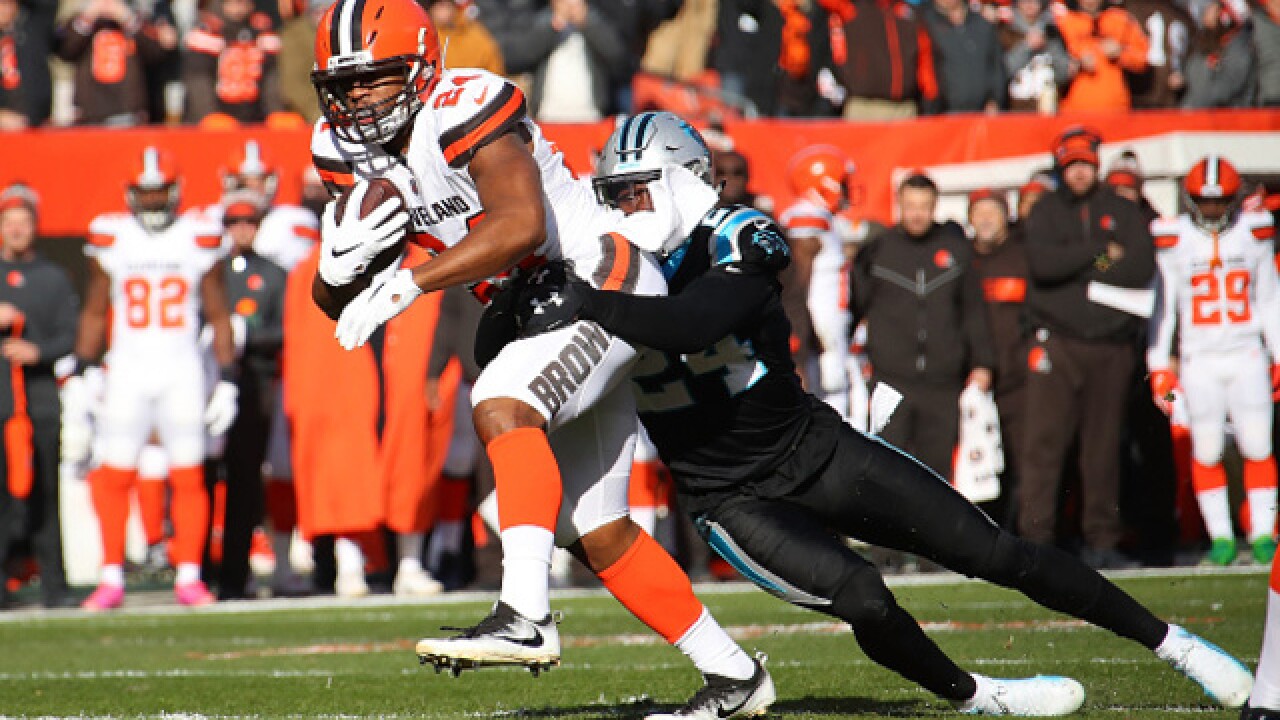 Copyright 2018 Scripps Media, Inc. All rights reserved. This material may not be published, broadcast, rewritten, or redistributed.
Gregory Shamus
CLEVELAND, OH - DECEMBER 09: Nick Chubb #24 of the Cleveland Browns is tackled by James Bradberry #24 of the Carolina Panthers during the first quarter at FirstEnergy Stadium on December 9, 2018 in Cleveland, Ohio. (Photo by Gregory Shamus/Getty Images)

DENVER — When Bradley Chubb was pestering quarterbacks in the ACC and Nick Chubb was plowing through SEC defenses, the second cousins dreamed of facing each other in a bowl game.

Bradley, a defensive end at North Carolina State, and Nick, a running back at Georgia, never got that opportunity in college.

“I know he’s not going to hold back and he knows I’m not going to hold back,” Bradley said. “It’s just going to be a regular football game. You can’t put too much weight on it because then if you start thinking, ‘My cousin’s on the other side,’ then you end up getting trucked or something. You’ve just got to keep it pushing and just play.”

That said, he knows the winner will have family bragging rights. “It’s going to be junk talking for about a year or until whenever we play each other again,” Bradley said. “It should be fun.”

Many draft prognosticators pegged Bradley as the Chubb that would star in Cleveland, but the Browns instead chose defensive back Denzel Ward with the fourth overall pick in the 2018 draft and the Broncos gladly grabbed Bradley at No. 5.

Thirty picks later, Cleveland selected his second cousin in the second round.

Both Chubbs have are having strong rookie seasons.

Nick’s 92-yard TD run against Atlanta in Week 10 was the longest in Browns history and the second longest by a rookie in the NFL.

“I’m not really thinking about that,” Bradley said. “We just came off a tough loss and now I want to get back on the winning track, whether it be getting one sack, zero sacks or 30 sacks in one game.”

Other notable subplots when the Browns try to snap an 11-game losing streak to the Broncos, whom they haven’t beaten since 1990:

Case Keenum has gone five games without throwing an interception after throwing 11 in his first eight games in Denver. But coach Vance Joseph called out his quarterback for being too risk-averse on downfield throws and told him to ditch the caution and get more aggressive.

Keenum said he would.

Joseph has the opposite message for Von Miller, saying he wants his superstar linebacker to quit trying to time the snap after he jumped offside three times last week. Miller said he wouldn’t.

Miller says his timing is usually spot-on and a big part of why he has 103½ sacks, counting playoffs, one shy of besting Simon Fletcher’s franchise record that’s stood for 23 years.

“Yeah, I jumped offsides. But quarterbacks throw interceptions, too. It’s not like you tell them not to throw the ball down the field no more,” Miller said. “Sometimes I gamble big and win ... and sometimes I don’t.”

Mayfield has been a different quarterback since coach Hue Jackson and offensive coordinator Todd Haley were fired on Oct. 29 and their replacements, Gregg Williams and Freddie Kitchens, took over.

“The biggest thing we’re doing with Baker is that we’re fitting things to his skill set,” Williams said. “And I’m not saying anything about who was here before because I wasn’t on that side of the ball. But once I did become involved, we have to involve our players that deserve to be involved. The quarterback is one of those.”

Mayfield’s completion percentage is up from 58 to 73 percent and he’s passed for 1,406 yards with 11 touchdowns and four interceptions. Under Williams and Kitchens, Mayfield has a 114.4 rating, which ranks behind only Drew Brees, Patrick Mahomes and Philip Rivers.

No opponent knows Mayfield like the Broncos, whose staff coached him at the Senior Bowl.

“After the first install, he could’ve taught the offense. He was that good with the offense,” Joseph said. “His personality, it’s infectious. His energy and his confidence, you can feel it.”

Going No. 1 overall, “I wasn’t sure about that,” Joseph said. “But I knew he had the arm talent to do it and the football IQ.”

A week ago, the Broncos appeared to have a gilded road to the wild-card round with just one of their final five games against a winning team, the Chargers, whom they’d already beaten in Los Angeles. Then they went and lost to a 2-10 team in San Francisco.

“We’ve been here before,” Joseph said of the adversity the Broncos navigated in overcoming a 3-6 start. “We’ll play our best ball on Saturday night. We have to. We have no choice.”

Their odds are long, maybe impossible, but the Browns are holding hope of ending the league’s longest playoff drought at 16 seasons just one year after going 0-16.

“We know we dug ourselves in a hole, and we know that we need some help,” said safety Damarious Randall, who insists the Browns would make some noise if they do somehow sneak into the playoffs. “We got all the pieces, man. We’re a complete team, and if guys take care of what they got to do play in and play out, we’re a tough out.”