Browns confident about future after rebuild under Williams 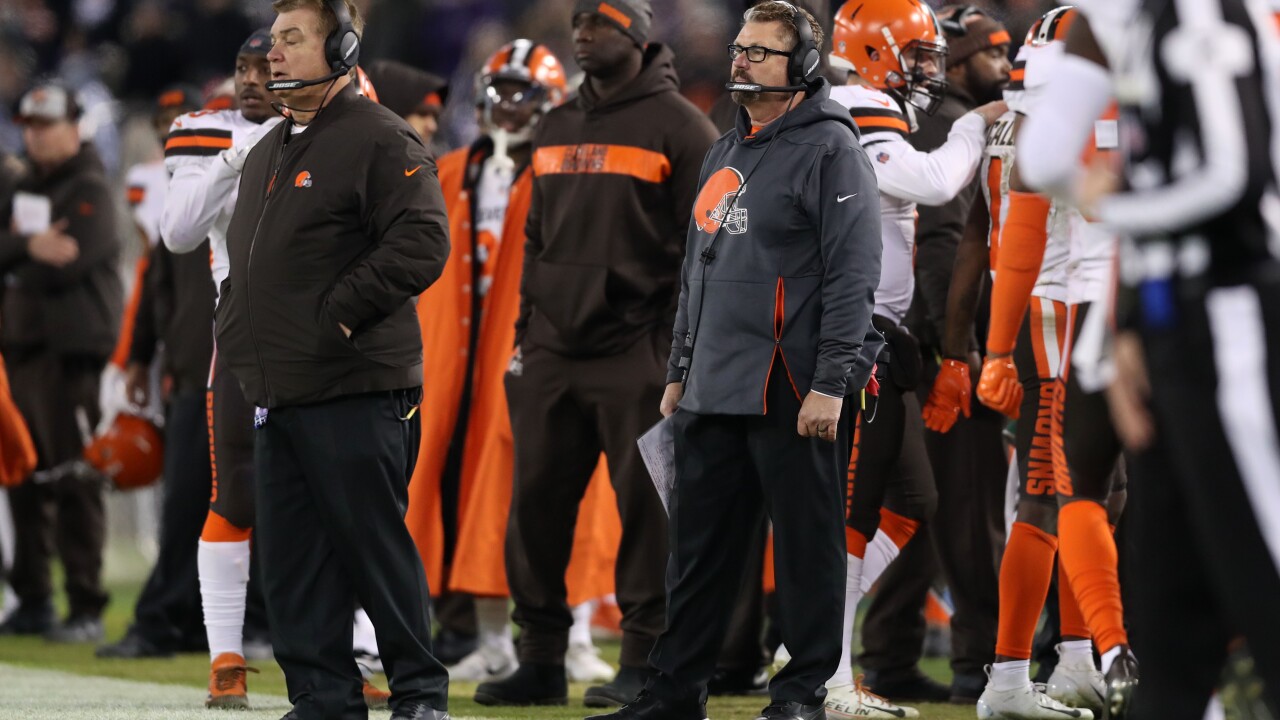 Rob Carr/Getty Images
BALTIMORE, MARYLAND - DECEMBER 30: Head Coach Gregg Williams of the Cleveland Browns looks on from the sidelines in the fourth quarter against the Baltimore Ravens at M&T Bank Stadium on December 30, 2018 in Baltimore, Maryland. (Photo by Rob Carr/Getty Images)

CLEVELAND — Gregg Williams has no idea whether he’s going shed the interim label and return as coach of the Cleveland Browns.

It sure seems as if he wants to, though, so he can finish what he started.

After replacing Hue Jackson in late October and rallying the Browns (7-8-1) to within a victory of a winning record, Williams is confident that no matter who’s in charge next year, the woebegone franchise is headed in the right direction with Baker Mayfield at quarterback.

“He’s just scratched the surface,” Williams said. “If you think he’s satisfied with that, there’s no way, no how.”

Mayfield nearly rallied the Browns from a 13-point halftime deficit Sunday in a 26-24 loss to the Baltimore Ravens. Down by nine points with seven minutes left, Cleveland got within a few yards of moving in position for a game-winning field goal in the final minute.

“I’m proud of how they responded,” Williams said.

Despite the loss, the Browns won seven more games than last year and finished with their best record since 2007, their most recent winning season.

“Coach Williams did a great job keeping us motivated and getting us to play hard,” running back Nick Chubb said. “He always got the best out of us.”

Pushing a playoff-bound Ravens team to the brink of elimination was merely a moral victory for Williams and the Browns. Williams was non-committal about his future, declining to reveal whether he’d be interviewed for the permanent coaching role now that the regular season is finished.

But he sounds a lot like a coach who would like the chance to lead this team to the playoffs.

“I really like this young team, and I’ve said this before: I turned down multiple jobs to come to Cleveland,” he said. “I really wanted the opportunity to come here.”

It helps that Williams has a rising star in Mayfield, who threw three touchdowns Sunday to eclipse Peyton Manning and Russell Wilson for TD passes by a rookie. Mayfield finished with 27, but couldn’t pull off a comeback to knock the AFC North champion Ravens out of the playoffs.

Williams could have trotted kicker Greg Joseph out to try a long game-winning field goal, but opted to ride as far as Mayfield could take him.

“We put it in Baker’s hands,” Williams said. “That’s my choice, OK? That’s who I wanted to see with the last opportunity was him.”

Mayfield, who finished 23 of 42 for 376 yards, was pleased with his rookie campaign . He set the rookie TD record in just 13 games after replacing veteran Tyrod Taylor and threw for touchdowns in 13 consecutive starts.

But his success — and the Browns’ best record in more than a decade — has only made him hungrier to take another positive step in the turnaround.

“I think going forward, for me, there’s a lot of room for improvement,” Mayfield said. “That’s promising for our team going forward. If we were satisfied, if we felt we had it figured it, we’d be sadly mistaken.”

Asked if he wanted to see changes in the coaching staff, Mayfield didn’t speak directly about Williams, but said: “The changes we made speak for themselves. All I want is for someone to put us in a position to win.”