Williams building strong case to be Browns’ next head coach 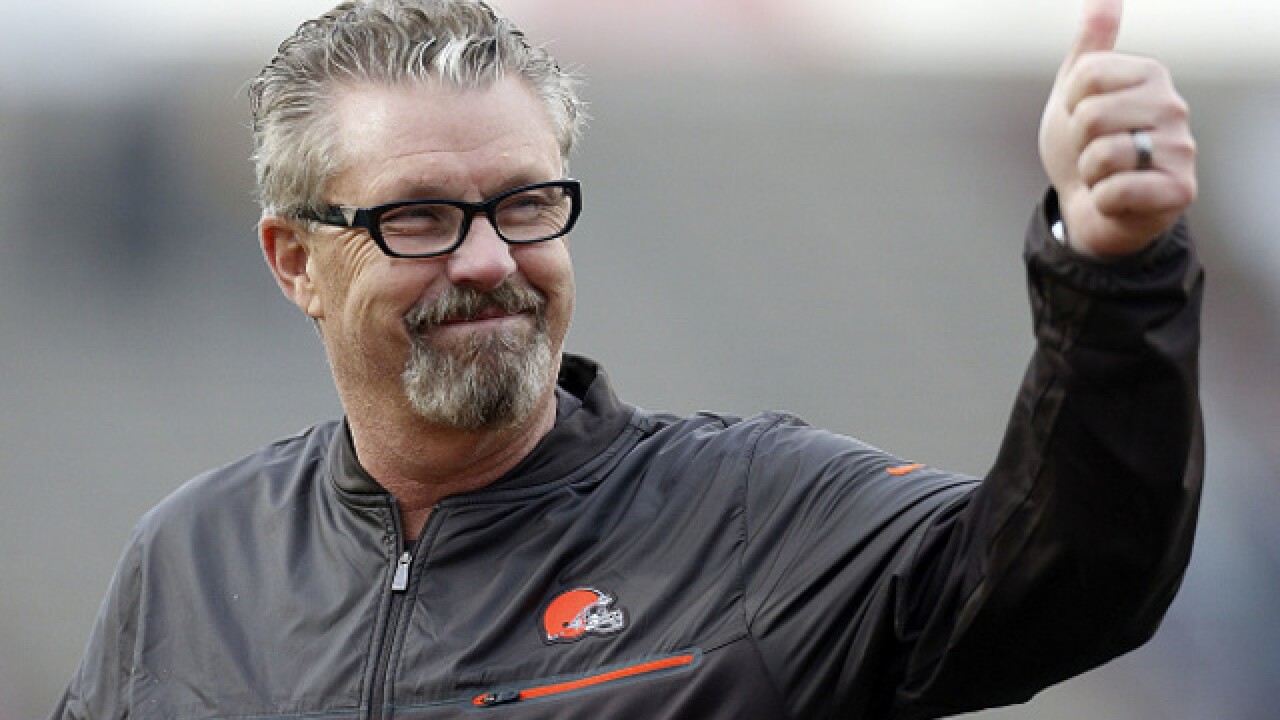 Gregg Williams’ chances, on the other hand, have improved.

Since being elevated to Cleveland’s interim coach when Hue Jackson was fired on Oct. 29, Williams, the team’s in-your-grill defensive coordinator, has guided the Browns to four wins — two on the road — and has a team that didn’t win once last season playing meaningful December games, believing anything is possible.

Seven weeks ago, Williams was a long-shot candidate. He now looks like a serious one.

“He deserves credit for a lot of stuff that’s going on now, just the fire and the energy that he’s bringing to this team has been incredible,” Browns wide receiver Breshad Perriman said Monday, two days after a 17-16 win in Denver. “I feel like you can’t put a limit for the amount of credit you give him.”

Williams has won over his players, who feel his attention to detail and demand for accountability has brought out the best in them. He’s also endeared himself to a segment of battle-scarred Cleveland fans, who would hate to see Williams leave and prosper elsewhere after his successful substitute stint.

General manager John Dorsey, who is heading the team’s coaching search, will interview Williams for the full-time job once the season ends. Until then, the 60-year-old Williams won’t discuss his future.

The gregarious coach loves to talk — about anything. But with two games to go, Williams is not going to address his interest in coaching the Browns (6-7-1) in 2019 and beyond.

“I appreciate to answer that, and all honesty, I do not think it is fair to the players or to anybody here,” he said. “The most important thing is making sure that these guys understand how we continue to win and how we get ready for the Bengals (on Sunday). Really. When they see the mindset is that way — that is the way that my mindset has always been. We will talk about that at the end.”

There is no denying Williams’ impact in less than two months.

The Browns were in shambles when he took over, headed toward further disgrace. But Williams has helped salvage this season — Cleveland is technically still alive for a wild-card spot — while providing a glimpse of a future that hasn’t looked nearly this promising in years.

Williams has more wins in six weeks than Jackson got in 40. He has demanded, and the Browns have responded.

“I just think it was just more attention to detail, and just us in the locker room just not letting all the outside elements affect us and affect how we play,” said safety Jabrill Peppers. “It would have been easy to crumble and blame everything else that was going on, but we stuck together, fought it out and we’re on the cusp of having our first winning season around here in a long time, so everything falls how it may.”

Peppers said he didn’t have any “ill will” toward Jackson, but indicated the Browns have been better prepared by Williams, who stresses competition at all times.

“We just practice real-game situations competitively now instead of having the game be the first time that situation arises,” Peppers said. “Let’s say it’s a two-minute drive, instead of the game being that first time our offense goes into two-minute mode, we do it in practice — competitive. We’re the ultimate competitors, so we all want to win that period, both offensively and defensively. I think that’s been the main thing that he’s brought that helps us win.”

It’s possible that Dorsey, who recently celebrated his one-year anniversary with the Browns, already has his next coach in mind — his wish list may include former Packers coach Mike McCarthy and Oklahoma’s Lincoln Riley — and there may be nothing Williams can do to dissuade him from selecting another coach.

However, if Cleveland wins its last two games and finishes with a winning record for the first time since 2007, Williams could make it very difficult for Dorsey not to hire him.

That once seemed a far-fetched scenario. Turns out, it may not be far off.

NOTES: Rookie CB Denzel Ward has not yet cleared concussion protocol. He has missed the past two games. ... Peppers and his teammates were motivated by meeting former NBA superstar Kobe Bryant, who spoke to the team on Friday in Denver. “That was probably one of the dopest moments since I’ve been in the league,” Peppers said. “It was just a good experience, man, and his message really hit home. It gave me that extra little oomph that I needed for prime time.” Peppers had an interception, and his first NFL sack in the closing minutes clinched Cleveland’s win.