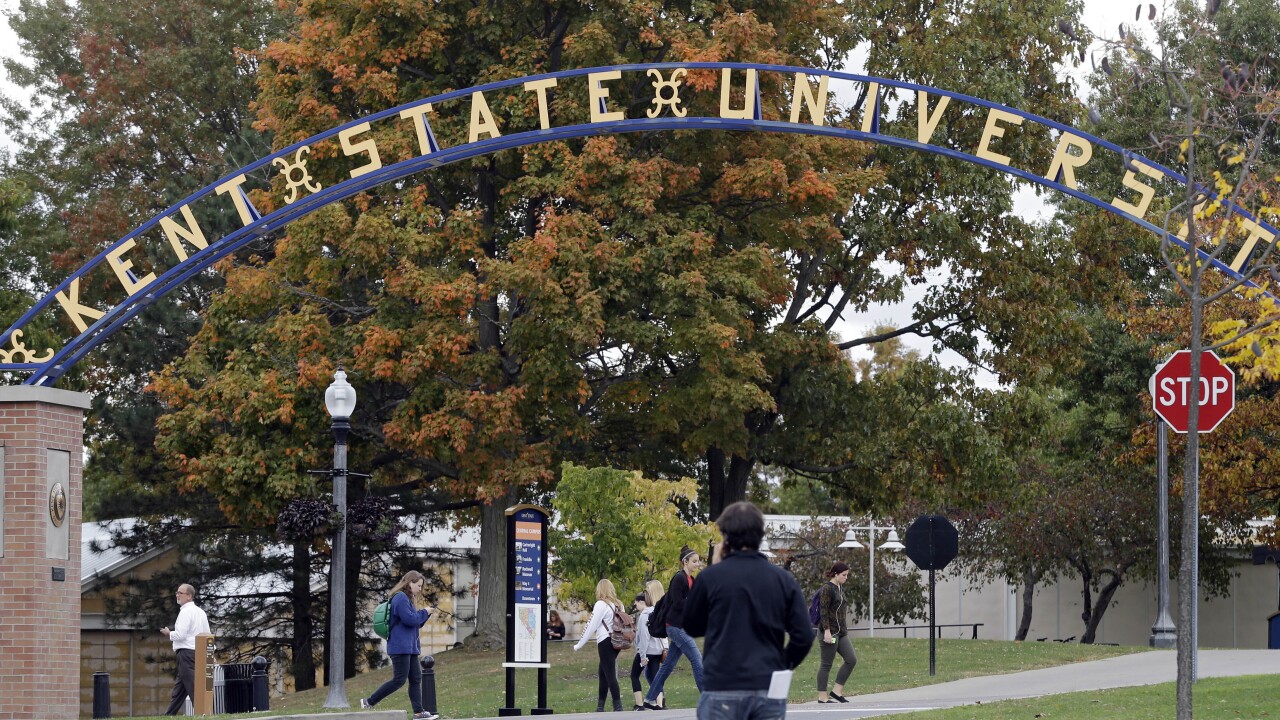 Mark Duncan/AP
On Monday, Kent State University announced it would continue a pause on university-sponsored travel, maintain a hiring freeze and cutting staff in an effort to establish a balanced budget for the 2021 fiscal year, according to a release from the school.

KENT, Ohio — Nearly a month after two women’s field hockey teams had their game called off in the middle of double overtime to allow a football game to start on time, an investigation into the incident has been completed, according to Kent State University President Todd Diacon.

A University of Maine and Temple University women's field hockey game hosted at Kent State University was called off during overtime play on Saturday, Sept. 6. After going into double overtime in a scoreless game, Kent State administration entered the field prior to the second overtime half and called the game off to allow the Kent State football game to begin on time, UMaine Field Hockey said.

A senior on Maine’s field hockey team tweeted following the incident, claiming the game was called off and the field was cleared for safety purposes due to fireworks being set off for the football game.

Diacon apologized for the incident a week later and announced he had initiated an investigation led by Kent State’s Office of Compliance, Equal Opportunity and Affirmative Action.

On Friday, Diacon announced that the internal investigation had been completed and that they found no violation of Title IX or gender-related bias.

The investigation also showed a similar scheduling situation happened in 2016 and rather than call off the field hockey game, the administration simply canceled the scheduled fireworks. Diacon said that the most recent incident involved new personnel and has since provided the current staff lessons on how to improve procedures.

The school has reached out to both Temple and University of Maine’s presidents and have offered to “reimburse reasonable and customary costs for their teams to play a make-up match this year, if possible.”

Kent State University will also begin a self-study to reevaluate their Intercollegiate Athletics Equity and Diversity Committee as well as a climate study of student-athletes and departmental staff.

“The actions we are taking will not only ensure that an incident like this does not occur again, but most importantly, will make all student-athletes — our Golden Flashes and visitors alike — feel supported and treated with respect, kindness and purpose in everything we do,” Diacon said.

A representative of Temple University said that the school never sent them an offer for compensation and that it wouldn’t make much of a difference anyway.

“It’s not really possible for us to make up a game at this point,” the representative said.

News 5 also reached out to the University of Maine but have not heard back at this time.