Buckeyes, Huskies face off in 105th edition of Rose Bowl 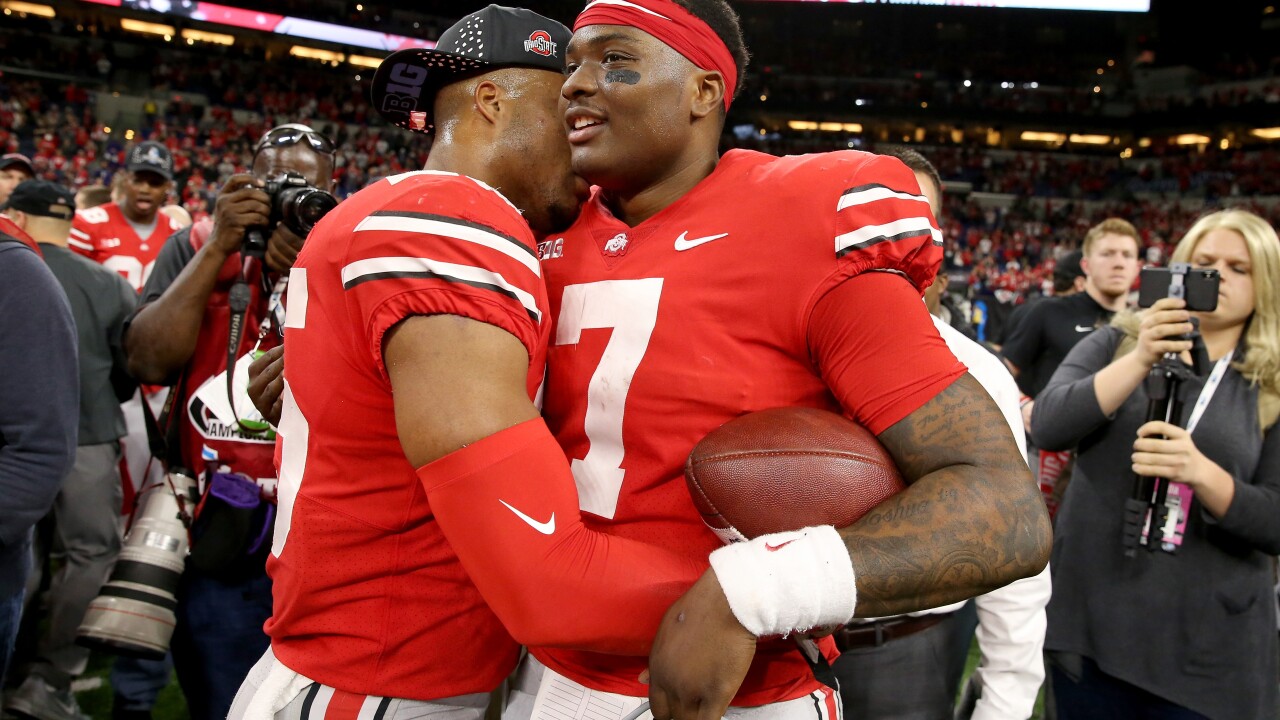 Andy Lyons/Getty Images
INDIANAPOLIS, IN - DECEMBER 01: Dwayne Haskins Jr. #7 of the Ohio State Buckeyes celebrates with his teammate after defeating the Northwestern Wildcats during the Big Ten Championship at Lucas Oil Stadium on December 1, 2018 in Indianapolis, Indiana. (Photo by Andy Lyons/Getty Images)

Ohio State’s Urban Meyer is ending his coaching career in the 105th edition of the Granddaddy of Them All. The three-time national champion coach leads another powerhouse Buckeyes squad against the Pac-12 champion Huskies, who are in the Rose Bowl for the first time in 18 years.

Ohio State QB Dwayne Haskins vs. Washington’s secondary. The Heisman Trophy finalist could be the first quarterback taken in the NFL draft if he goes pro, but he’ll first attempt to figure out the Huskies’ stellar collection of defensive backs. Washington already shut down the nation’s top passing offense, and now it gets a shot at the second-ranked unit.

Washington: QB Jake Browning. The four-year starter wraps up his record-setting career with a shot at a signature victory. He has passed for 2,879 yards with 16 touchdowns and 10 interceptions this season.

Ohio State: DT Dre’Mont Jones. He is leaving early for the NFL, but the dominant lineman wouldn’t miss the chance to win the Rose Bowl. He has 13 tackles for loss and 8 ½ sacks this season, forming a dominant team with defensive end Chase Young.

The Big Ten champ is meeting the Pac-12 champ in the Rose Bowl for the first time in college football’s playoff era. ... Ohio State won the Rose Bowl in its most recent trip after the 2009 season, while the Huskies also won the Granddaddy in their most recent trip after the 2000 season. Both schools are making their 15th appearance in the game, but they’ve somehow never met in Pasadena. ... Ryan Day is the Buckeyes’ co-offensive coordinator and quarterbacks coach until after the game, when he formally replaces Meyer as the 25th head coach in program history. ... Haskins has thrown 14 TD passes in the fourth quarter this season, most in the FBS. ... Meyer is 19-2 at Ohio State when he has more than a week to prepare for an opponent. ... Browning is Washington’s career leader in yards passing and passing TDs. RB Myles Gaskin is the Huskies’ career leader in yards rushing. ... Ohio State won’t announce until game time whether LT Thayer Munford is playing through an undisclosed injury. Joshua Alabi is likely to step in if Munford can’t go. ... Forecast calls for high winds in Arroyo Seco around kickoff.