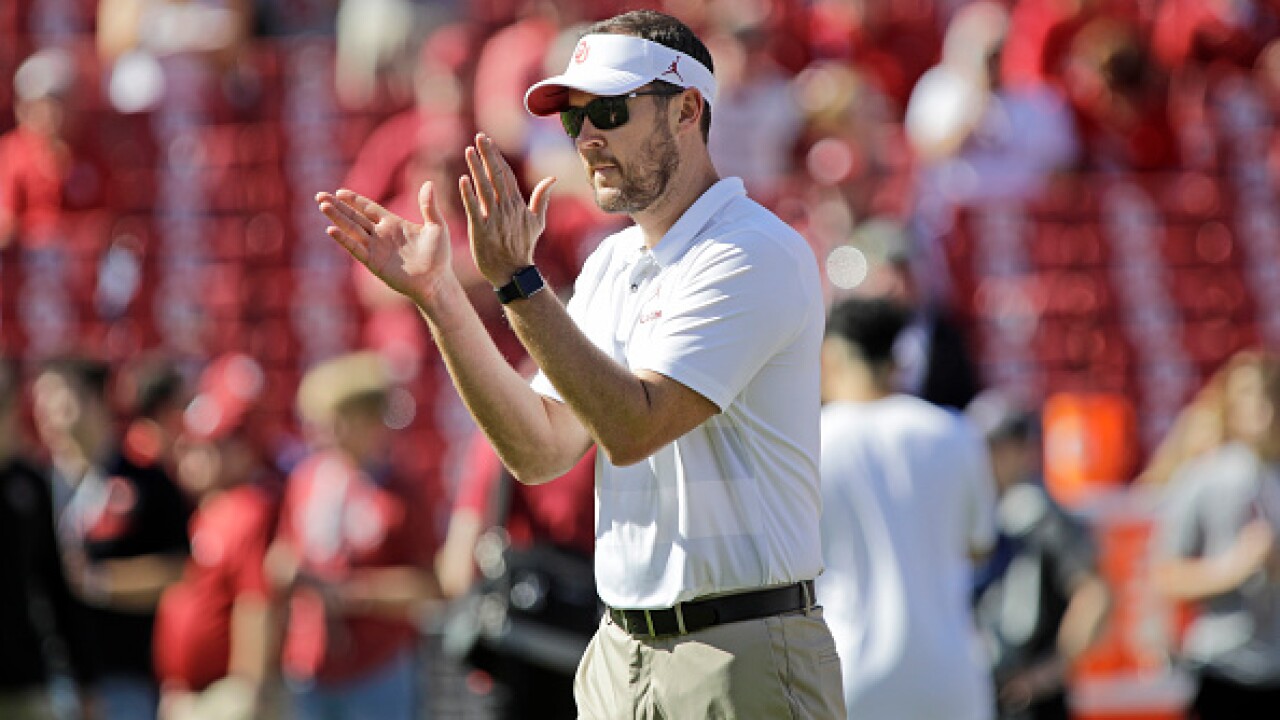 NORMAN, Okla. — Watch any NFL telecast that involves a struggling team, and Oklahoma coach Lincoln Riley likely will be mentioned as a potential candidate for that coaching job.

If he somehow wins the national title at age 35, an already high price tag might go through the roof if the Sooners want to keep him in Norman.

Right after the Cleveland Browns fired Hue Jackson in late October, Riley said his heart remains at the college level.

“You sit here and answer these questions and . I always want to be truthful,” he said. “And the truth for me is I love Oklahoma. I love coaching here. I love college football. I certainly don’t have that itch right now. I don’t know if I ever will. I’m never going to be a guy that’s going to stand up here and say no way, no how will any of these things ever happen. I don’t know that. I know right now I could (not) care less about the NFL.”

The NFL sure seems to care about him. It might be mere coincidence that Browns general manager John Dorsey has attended Oklahoma’s past two games , but it’s just one more nugget to fuel speculation.

Mayfield, who is having a strong rookie season for the Browns, said Riley is ready to make the leap to the pros.

“Lincoln’s been ready, it’s just who he is and how he coaches and the respect level he’s had from all of his players, how detailed he is,” Mayfield said. “Yeah, he’s ready, but that’s his decision, and you know what? He’s got something special there, so I don’t think anybody is going to blame him if he stays there for the next 20 years.”

Riley already has received major raises in the past two years. In May 2017, his salary as offensive coordinator increased to $1.3 million, making him one of the highest-paid coordinators in the nation. The next month, when he became head coach, it jumped to $3.1 million. This past June, it went up again, to $4.8 million.

More might be in order. This season, Riley fired defensive coordinator Mike Stoops after a loss to Texas. The Sooners haven’t lost since.

The speed of his ascent might be as impressive as the success itself — in 2014, Riley was the offensive coordinator at East Carolina. Oklahoma hired him for that same role in 2015, and he won the Broyles Award for the nation’s top assistant coach that year. In his second year as offensive coordinator, the Sooners won the Sugar Bowl.

Riley maintained his play-calling duties when he became head coach. In his first year, Oklahoma led the nation in total offense and was third in scoring offense.

This season, with a new quarterback and star running back Rodney Anderson getting injured in the second game of the season, Oklahoma leads the nation with 49.5 points and 577.9 yards per game. The Sooners rank eighth nationally in passing offense and 11th in rushing. Oklahoma’s offense has been so explosive that the Sooners beat Texas Tech, Oklahoma State, Kansas and West Virginia four straight weeks, despite allowing at least 40 points in all four games.

“They’ve had some great games this year, high-scoring games where their defense has come through when they’ve needed to, but I do think this is one of the most dynamic teams that I’ve seen for a long, long time in terms of the way they play offense,” Saban said. “I think Lincoln does a great job with their players.”