CLEVELAND — Khloe Kardashian and Tristan Thompson have broken up, according to TMZ.

Shortly after the story was published, Thompson tweeted a cryptic message, that has since been deleted. 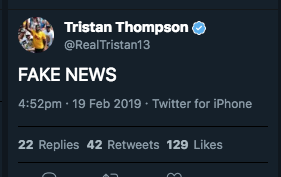 Last April, reports surfaced that Thompson had been spotted in the company of other women during Kardashian's pregnancy with their child.