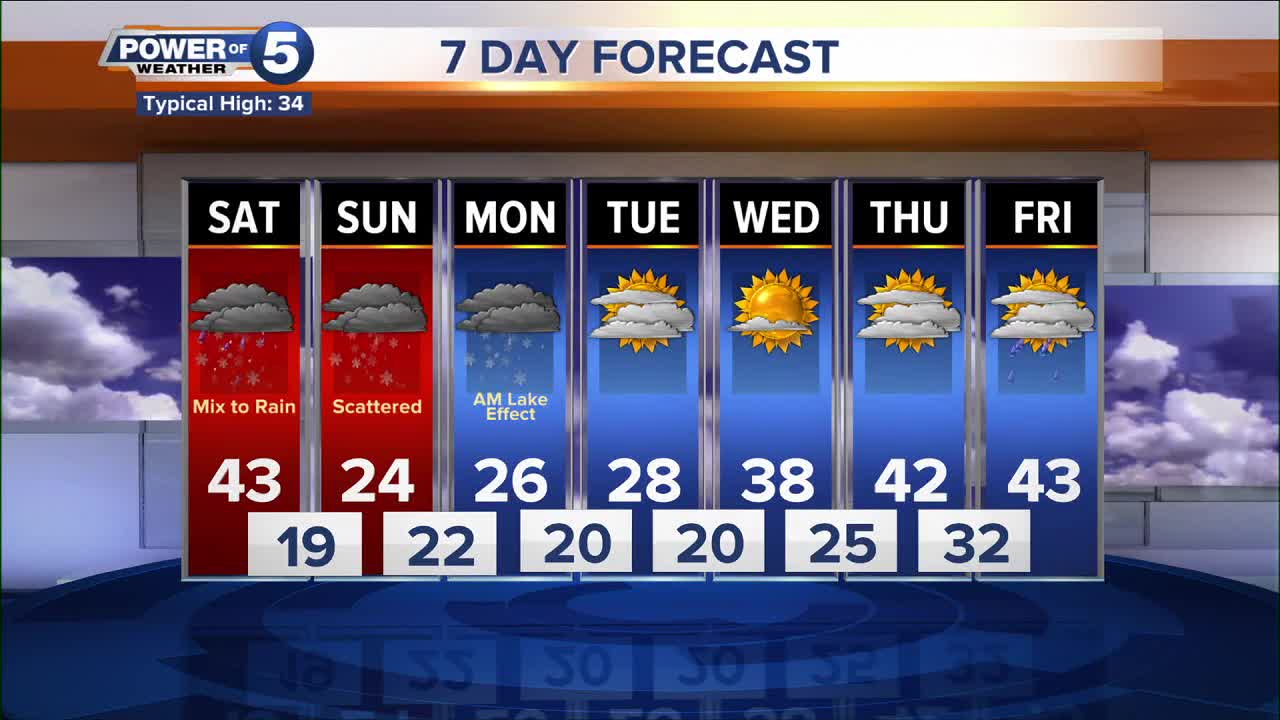 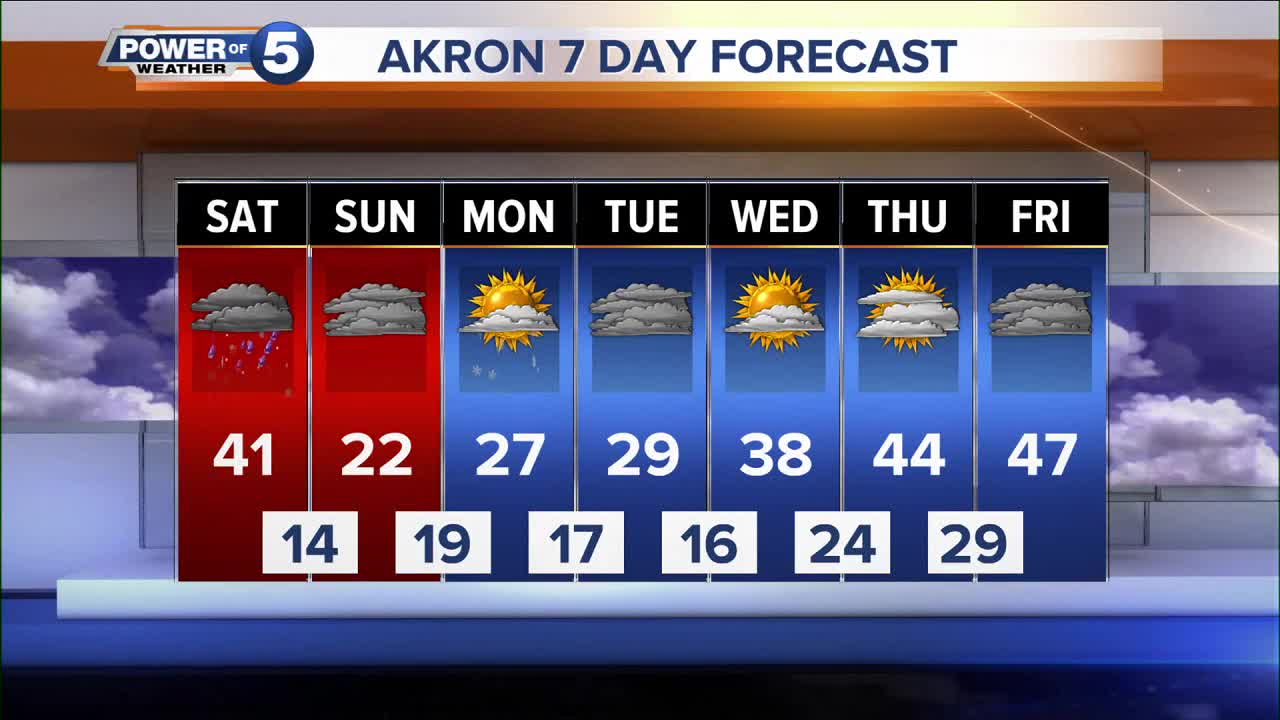 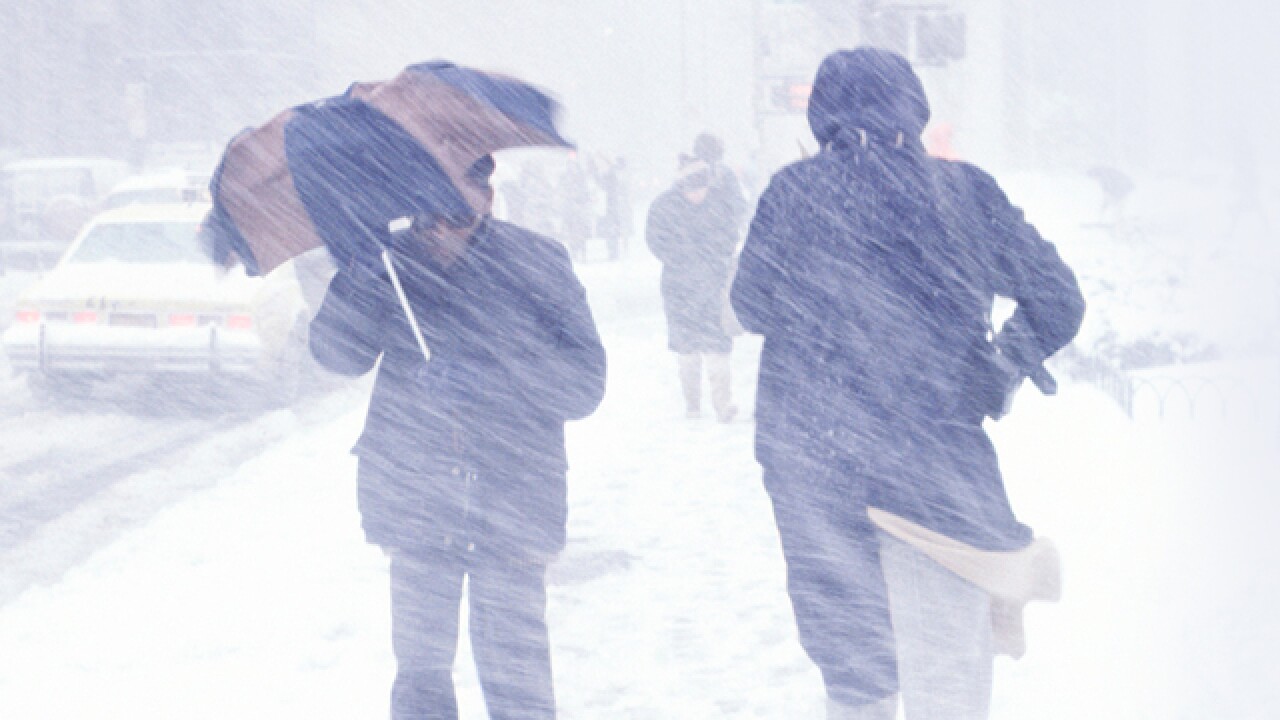 Northeast Ohio got a taste of winter weather Saturday morning after a relatively mild start to the year, and that winter weather is going to continue throughout the weekend.

A mix of snow, sleet, freezing rain and rain began moving across most of Northeast Ohio Saturday morning.

Temperatures will warm up enough by late morning or early afternoon to change all of the precipitation to scattered rain showers for the rest of Saturday. Winds during the day could gust above 30 mph, especially during the afternoon and evening.

A strong arctic cold front will sweep east through Ohio Saturday evening. This will usher in much colder air to end the weekend. Expect heavy lake effect snow squalls to develop east of Cleveland up the shoreline toward Mentor, Painesville and Ashtabula Saturday night through early Monday.

Snow Advisories
Multiple counties in Northeast Ohio are under snow advisories, issued by authorities due to road conditions.

LEVEL 2:
Roadways are hazardous with blowing and drifting snow. Roads may also be very icy. Only those who feel it is necessary to drive should be out on the roads. Contact your employer to see if you should report to work. Motorists should use extreme caution.

LEVEL 3:
All roadways are closed to non-emergency personnel. No one should be driving during these conditions unless it is absolutely necessary to travel or a personal emergency exists. All employees should contact their employer to see if they should report to work. Those traveling on the roads may subject themselves to arrest.

Winter Weather and Wind Advisories
A Wind Advisory has been issued for several counties in Northeast Ohio. Wind gusts of over 40 mph are expected in these areas.

A Winter Weather Advisory has been issued for the following counties, effective from 11 p.m. Saturday until 4 a.m. Sunday:

Power Outages
More than 2,000 Northeast Ohio residents have been left without power as winter weather made its way across the area, according to FirstEnergy.

Customers in Cuyahoga County, Sandusky County and Ashtabula were left without power.

RELATED: More than 2,000 without power during Winter Weather Advisory in Northeast Ohio

Hazardous roads
The Ohio Department of Transportation has flagged several roads in Northeast Ohio as hazardous due to the winter weather conditions Saturday morning.

Pepper Pike police said a crash on Interstate 271 between Chagrin and Cedar was causing slow traffic. An image of the scene shows a semitruck facing the opposite direction on the side of the road.

A crash involving a school bus occurred on Interstate 76. Three individuals were transported to a nearby hospital.

AAA issued tips for driving in winter weather to make sure drivers are prepared for this year’s snowy road conditions.

Hinkley Township is under a Snow Parking Ban and police have requested residents move their vehicles off township roads to allow plows to clear the roads.

Freezing rain is seen as rain but freezes as it hits the ground or anything else because the air at the surface is below freezing.

Falling ice is sleet. It is snow that has melted and froze again.

Headed Our Way
Shaw also shared a radar image of the precipitation across Ohio, with snow mostly out of the way and rain moving in next, followed by sleet and freezing rain.