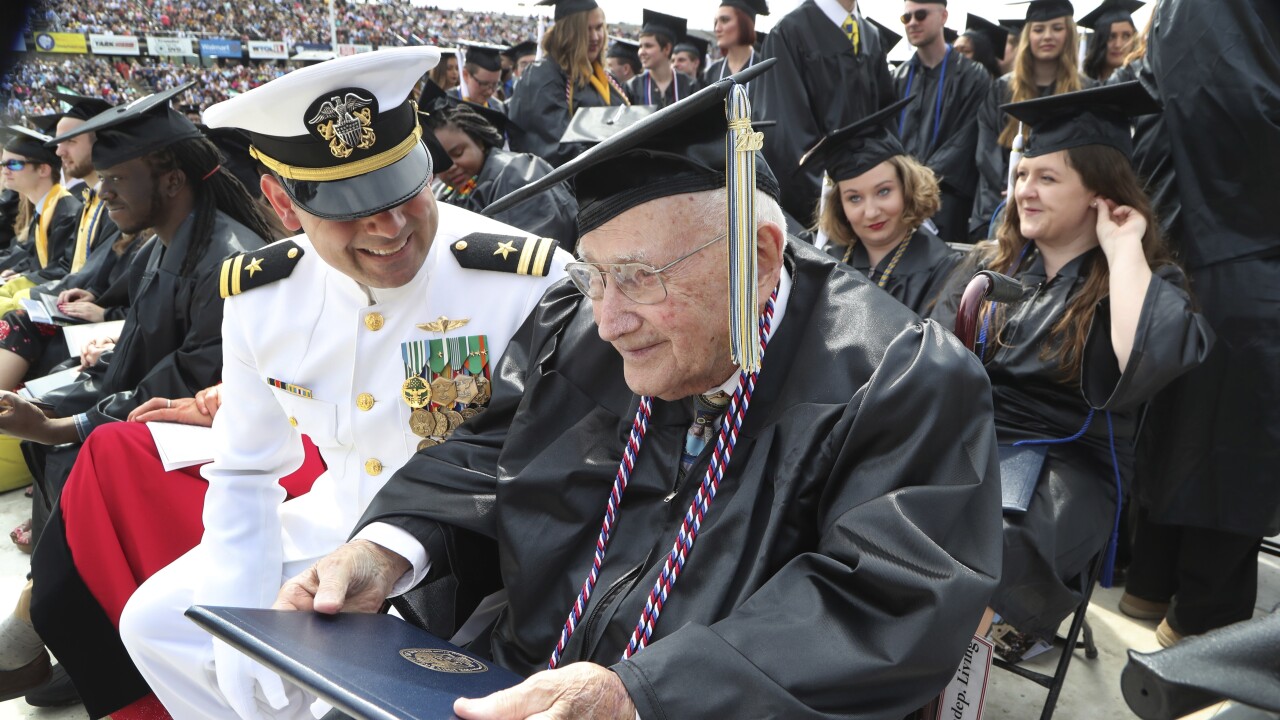 Carlos Osorio/AP
World War II veteran Bob Barger, assisted by Haraz Ghanbari, University of Toledo director of military and veteran affairs, left, smiles after receiving his diploma at the commencement ceremony at the university, Saturday, May 5, 2018, in Toledo, Ohio. Now, 68 years since he last sat in a classroom, Barger graduated after a review of his transcripts from the late 1940s showed he completed enough courses to qualify for an associate's degree — a two-year diploma not offered when he was still in school. "It was something I never dreamed of," the 96-year-old Barger said. "I knew I couldn't go back to school now. The university took a look at Barger's old school records because of a friendship he struck up with Ghanbari. (AP Photo/Carlos Osorio)

TOLEDO, Ohio — A World War II veteran who flew planes for the Navy and received his college degree last spring nearly 70 years after he last sat in a classroom has died, his family said. He was 97.

Bob Barger died Wednesday at a Toledo retirement community where he lived, according to Newcomer Funeral Home and a family friend.

He graduated from the University of Toledo in May after a review of his transcripts from the late 1940s showed he completed enough courses to qualify for an associate’s degree — a two-year diploma not offered when he was still in school.

“It was something I never dreamed of,” he said after learning he would get his diploma. “I knew I couldn’t go back to school now.”

Barger was honored at the school’s commencement ceremony, where he received his degree to a standing ovation. The White House later paid tribute to Barger, who received a letter from President Donald Trump.

Getting the degree, he said, reminded him of all the friends and family who were a part of his life.

The university took a look at Barger’s old school records because of a friendship he struck up with Haraz Ghanbari, the school’s former director of military and veteran affairs.

Ghanbari found out that Barger never graduated from the university, even though he took a full load of classes from 1947 to 1950.

The records showed Barger completed 83 credit hours — about 20 more than what’s required for the associate’s degree.

Barger was a pilot in the Navy, enlisting after seeing an advertisement that said “join the Navy and get an education.”

He flew seaplanes for scout observation over the Gulf of Mexico and later was a flight instructor.

Barger returned home to Toledo with his wife and young daughter and studied business and advertising while working for a paper company. He remembers history was his favorite class at what was then called Toledo University.

He never gave much thought about not graduating. When Ghanbari told him that he would finally get a degree, he let out a hearty laugh. “I can’t believe this. I’m 96 years old,” said Barger, whose wife died in 2011.

Members of the university’s Student Veterans of America chapter bought him a cap and gown and the assisted living center where he lived held a big graduation party for friends and family.

Barger wore a shirt in the school’s colors that said “Alumni” for the party.

Ghanbari said he was humbled to meet Barger just over five years ago. “It was a privilege to escort him across the stage during his graduation,” he said.

Newcomer Funeral Home said there will be a visitation Jan. 18 and a funeral Jan. 19 at Messiah Lutheran Church in Toledo.