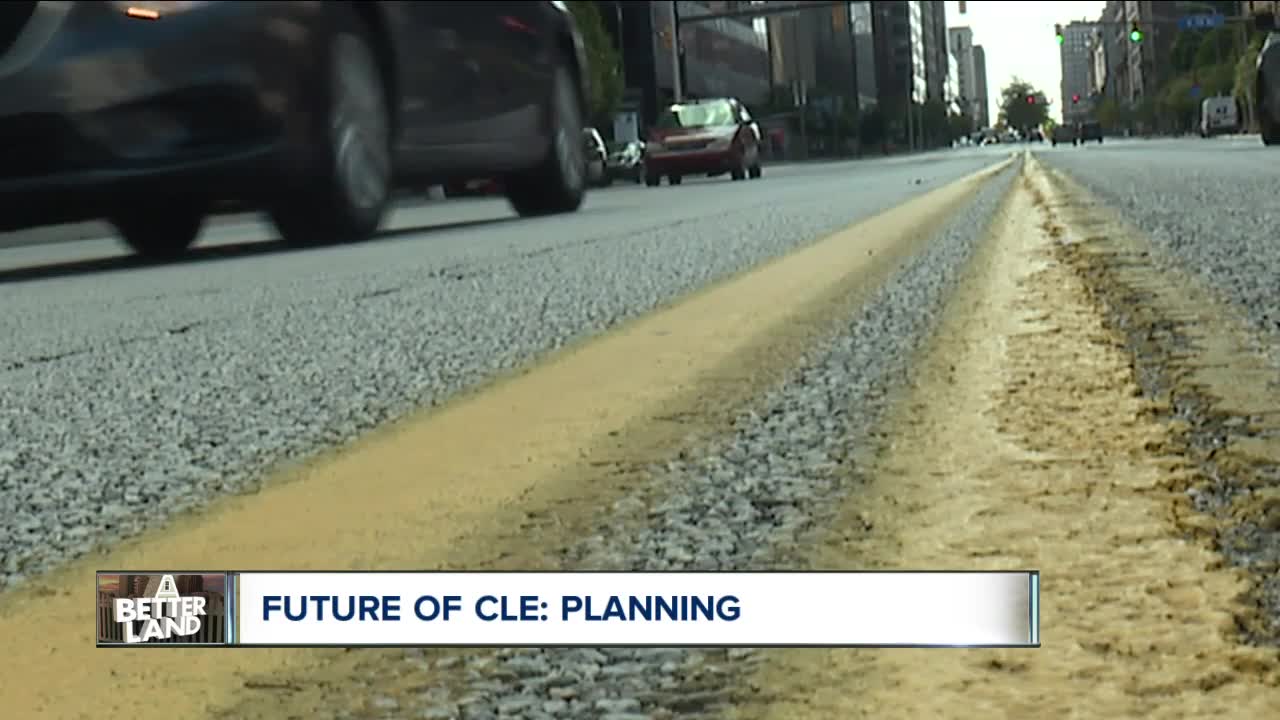 The Cleveland city streets in the next few years could start to reflect the streets of the future with less room for cars and more room for other methods of transportation. 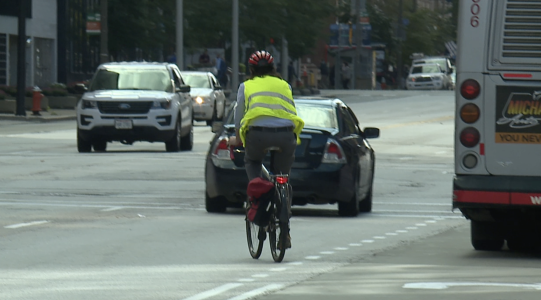 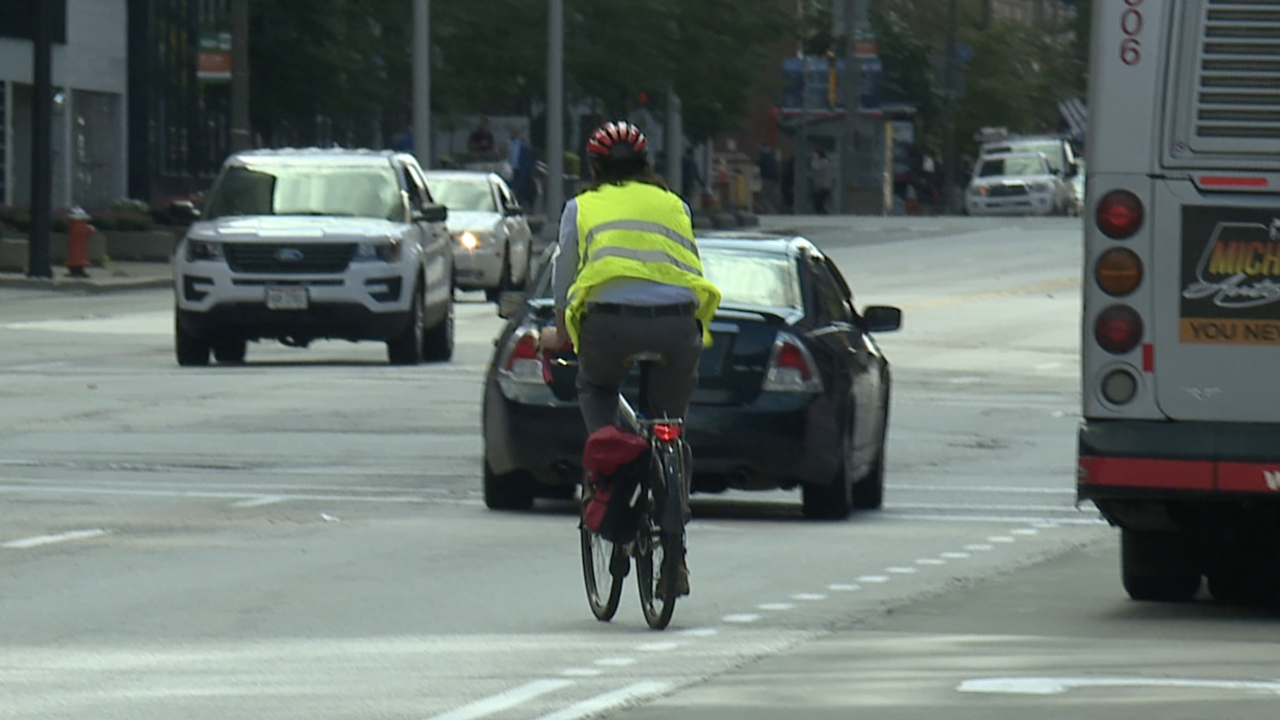 CLEVELAND — The Cleveland city streets in the next few years could start to reflect the streets of the future with less room for cars and more room for other methods of transportation.

Large downtown streets built for more than double the amount of people Cleveland has right now are often empty, especially during the middle of the day. Changing how those streets look could open up entire parts of the city that some people can't get to.

While cars pass outside Fridrich Bicycle in Ohio City, Tallis Munro works on the only type of vehicle he chooses.

"I gave up my car about 16 years ago and just switched to bicycles," said Munro.

He rides to the Ohio City shop 15 miles one way from his home in Euclid. A lot of that commute is on big downtown avenues like Superior, where Munro says he has at least one "close call" every week.

"I start getting shaken when the near-death experiences go to four or five," said Munro. "And I'm talking inches."

His cycling advocacy pushes to connect existing bike lanes and trails while trying to build more.

There are a handful of projects that would increase connectivity in the works right now that have gotten significant financial support.

In October, Cuyahoga County leaders announced a plan to connect paths, trails and boardwalks all along Lake Erie from Bay Village to Euclid.

Around the same time, Cleveland Metroparks approved a $6 million project to build a bridge to Wendy Island, drastically cutting down what is now a long journey to get to the park from the East Bank of the Flats.

Over the summer, the federal government promised $9 million to keep the hillside along Irishtown Bend from collapsing into the Cuyahoga River, setting the stage for potential development on what is now mostly overgrown greenery.

An additional stretch of the towpath trail is being finished near Steelyard Commons connecting the Harvard Avenue trail all the way to Ohio City.

The city of Cleveland has tried.

It passed a green streets law back in 2011 which led to about 80 new miles of bike lanes and trails and Councilman Kerry McCormack is working on amendments to that original ordinance that would give it more teeth.

VanSickle says the 80 new miles of bike infrastructure is a start but there should have been even more.

"We also see a lot of streets where there's also been missed opportunities where we feel like the ordinance should have applied," said VanSickle. "Streets like East 9th Street, East 55th, or Woodland."

VanSickle's map (below) shows which streets he says have been bulit following green streets guidance and which ones he calls "missed opportunities."

Councilman Matt Zone was involved in the initial green streets ordinance in 2011 and now he's heading up the city's Vision Zero Task Force along side Cleveland COO Darnell Brown.

The Task Force is trying to change the way the city designs its roads to prevent more than 200 serious injuries and deaths every year.

"More than 90 percent of those [injuries and deaths] happen on less than 10 percent of our streets," said Zone. "The majority of those streets are in low-income communities and communities of color."

Those communities make up a lot of the business that comes through bike shops like the one Munro works in.

"There's a lot of low-income people who rely upon their bicycles to get places," said Munro.

When commuting is a challenge, or dangerous, Cleveland NAACP President Danielle Sydnor says it can hold everyone back.

"Then you tend to stay in low-wage paying jobs that are more service-based, that are more available in your neighborhood," said Sydnor.

The solution to problems like that might be found in an ambitious project called the Cleveland Midway.

"It's really about building a green space in the middle of the road for people to bike and walk down," said VanSickle.

The Midway is expected to be installed in 2021 and will give two lanes, protected by plants and barriers, to bikes, runners, walkers, and scooters right down the center of Superior Avenue, one of Cleveland's busiest and largest.

"I love the Midway Project particularly because it's taking a disadvantage and turning it into an advantage," said Kent State Urban Design Collaborative Director Terry Schwarz.

It's supposed to run from Public Square all the way to East 55th Street, helping communities miles from the center of downtown.

"Where the Midway is proposed to run would actually serve some of the lowest-income neighborhoods in the city," said Schwarz.

This is part of a four-part series looking the Future of Cleveland.