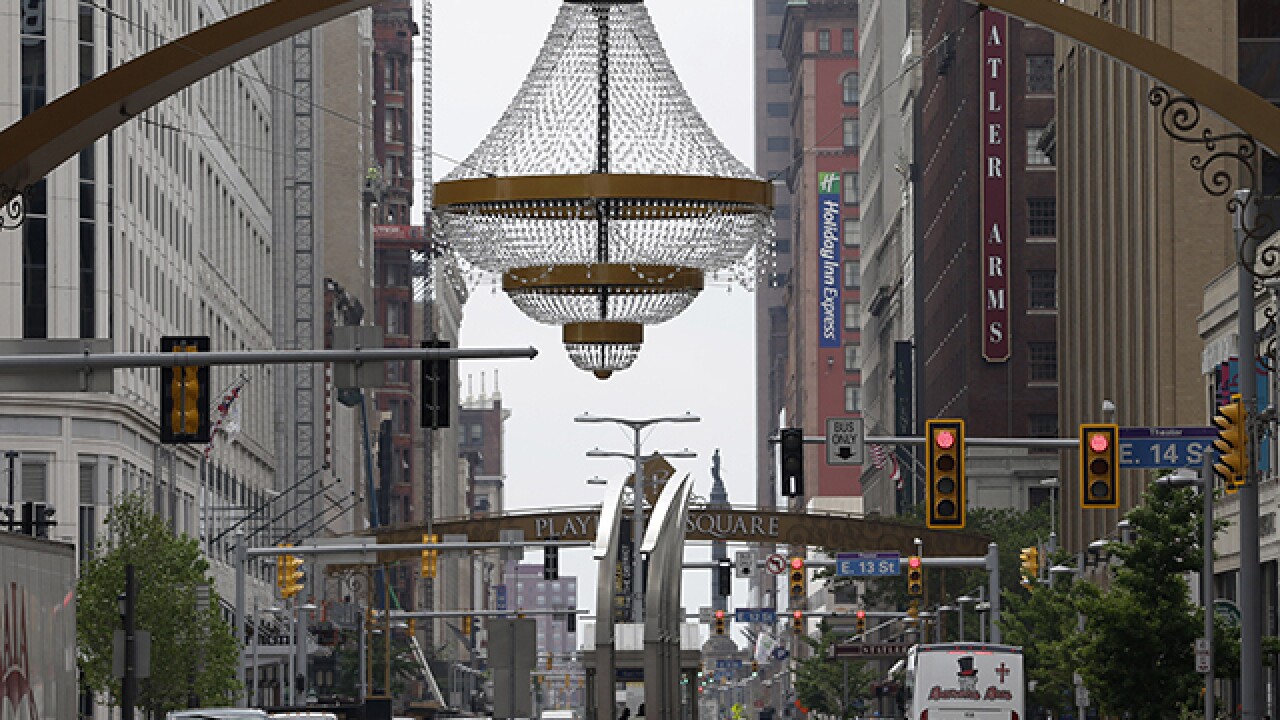 Copyright 2018 The Associated Press. All rights reserved.
Tony Dejak
<p>This Tuesday, June 24, 2014 photo shows the world's largest chandelier hanging in the Playhouse Square district in Cleveland. Cleveland is one of two finalists for the Republican national convention in 2016 and a longshot candidate to host the Democratic convention as well. (AP Photo/Tony Dejak)</p>

Those who haven't been to Cleveland never really think of it as a destination high on their list, but once they find themselves here, many are surprised to discover the beauty in the most unexpected places.

That was the case for the cast of "Hamilton" as members in the hit musical said goodbye to Cleveland after a six-week stint that ended on Sunday.

Shoba Narayan, who plays Eliza Hamilton in the musical, posed in the KeyBank State Theatre on Instagram, to give her final farewell on the stage she spent entertaining musical-goers for weeks.

last show in CLE ☝🏾loved this stunning house and the incredible audiences. thanks for welcoming us in with open arms! #hamiltour

Sometimes it takes a visitor to remind Clevelanders how many hidden gems the city has to reveal. Nik Walker, who plays Aaron Burr in the musical, couldn't stop boasting about Cleveland. He posted a photo with a local man who he ran into on one of his many trips to Heinen's.

A Farewell to Da Tribe . . . . . . Met @worldbfree86 at- u guessed it- good ol’ @heinens, way back during one of my first weeks here in Cleveland. Wicked nice dude working in the Health and Wellness section while starting up his own hair care brand @naturishhbc; found out later that his mom started ushering @playhousesquare this season, just so she could see the show. Every time I’d come in I’d see him, working hard on his gig, always time to drop me a wave... and as small of an act as it was, gotta say, it’s those little warm connections that keep you going on tour, and Cleveland, you’ve been full of em. Y’all opened your doors wide for us, and it was not only appreciated, but needed. So much love to my man Eugene, @clevemetroparks @clevelandbrowns @clevelandmuseumofart and all the killer restaurants... you guys rule. Much love to ya, and thank you. Mini vaca first... then Minneapolis - you’re up. #hamiltoncle #ttfn

In July, Walker revealed how shocked he was that not a single Clevelander mentioned the "glory" of the  Heinen's.

"Every town has got their secrets, and you got this strange tourist coming in and doing a strange show and you don't want to tell him about the town's secrets...," he said in a deadpan tone in a Twitter video he filmed while walking around inside the iconic building. "I get that. That's to be expected."

Joseph Morales, who plays Alexander Hamilton, called Cleveland a "gem" on his final day in the city.

Last day in Cleveland. What a gem. So many cool things going on here. So grateful for the amazing people who have opened their city to us and embraced us so lovingly. Let’s finish this. Minneapolis, I’m looking at you. 👀

When the cast wasn't on stage performing, they were exploring everything Cleveland has to offer. They visited the Cleveland Metroparks Zoo and the Rock and Roll Hall of Fame.