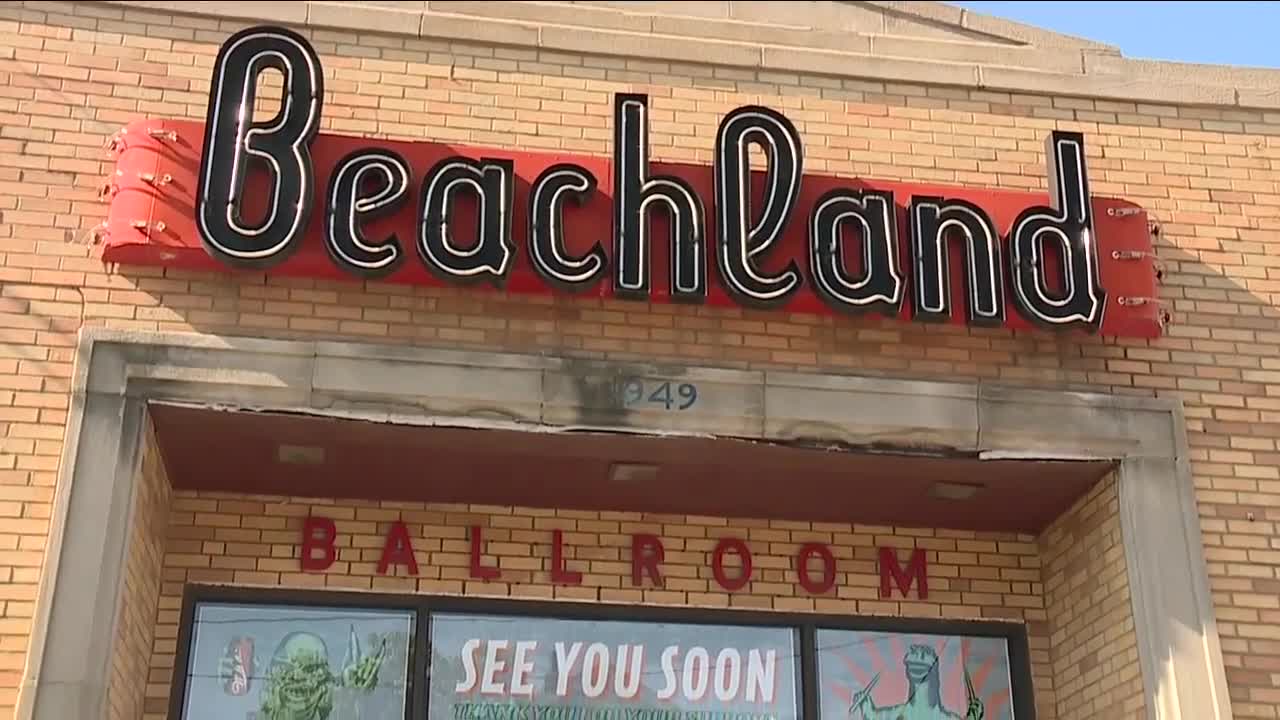 Independent live music venues are asking Congress for assistance to make it through the pandemic, and they're hoping music lovers will take up the cause, too. CLEVELAND — Independent live music venues are asking Congress for assistance to make it through the pandemic, and they're hoping music lovers will take up the cause, too.

The recently-formed National Independent Venue Association (NIVA) is made up of more than 2,000 live music venues that want Congress members to pass the Save Our Stages Act (S.4258) and the RESTART Act (S.3814).

The first bill seeks to "establish a grant program for small live venue operators and talent representatives," while the second would extend the Paycheck Protection Program (PPP) and establish a program to give Small Business Administration (SBA) loans to "certain businesses affected by COVID-19."

In Cleveland, the Beachland Ballroom and Tavern in the Collinwood neighborhood is celebrating its 20th year as a live music venue. During that time, it's launched bands like the Black Keys. But it hasn't held a live show since March when it had to shut down.

Co-owner Cindy Barber said the venue has had to furlough about 75% of its staff, keeping on some to work with booking agents and artists to reschedule spring and summer shows, many of which were sold out.

"All of those shows moved to fall, and now because of the spike in COVID, we’re now having to move them again well into next year," Barber said.

The Beachland received PPP money, but Barber said that ran out last week. The venue also got a disaster loan from the SBA, which she said they're using to pivot and redo the kitchen to provide more restaurant-type service. They've used some of the downtime to renovate the ballroom, as well.

"But then that’s it. The money’s gonna run out," Barber said. "So unless we get a new infusion or we figure out a way to reuse this building in some other manner, I don’t know what we’re going to do."

Wednesday marked a Day of Action for NIVA venues, where Barber said they were asking "people who love music to call their Senators and their Congresspeople to support Save Our Stages or RESTART."

"If this goes on for another year, we probably could survive it if we can stretch that money out, but that’s really the only way that we’re probably going to make it," Barber said.

She said NIVA hired a lobbying organization that is guiding venues on how to ask for help through legislation.

"We’re all getting a lot of support and know that we’re not alone in this fight," Barber said.

However, that doesn't make it easier to watch venues close permanently, something Barber said approximately 10 NIVA venues have already done.

She said the legislation would cover not just music venues, but also "performance nonprofits, like Playhouse Square and Beck Center and the Wexner Center, and all of those people are going to need help, too."

"I think we’re gonna lose some venues and it’s also a matter of the culture," Barber said. "These small venues are the starting place for people to hear music that’s creative and forthcoming. I mean, we launched the Black Keys out of the Beachland."

While the Beachland will pivot if help doesn't arrive, she said the culture of live music would change.

"Touring, music the way we know it, will not exist anymore like that," Barber said. "If some of these clubs go out of business, then there’s no way for a band to get from California to New York and have a touring jump day after day. And that’s gonna be really sad."

She added, "A lot of artists are actually getting day jobs because they can’t tour. It’s a trickle effect. You know, you’re talking about sound engineers and loaders and bus drivers driving the bands around the country. I mean, all of these people are now out of work."

At the Bop Stop, a jazz club in Ohio City owned by The Music Settlement, director Gabe Pollack said they're finding ways to use the space instead of holding public concerts. They're live-streaming performances and renting the space out for personal concerts of 15 or fewer guests. But Pollack said that's not sustainable long-term.

"We’ve been able to tap our immediate communities, our fans, pretty well to support us from their own pocketbooks, but we really need some significant cash influx to cover the last six months of our expenses where we haven’t been able to earn revenue in the same way that we generally do," Pollack said.

Typically, the Bop Stop holds about 300 concerts a year, with approximately 1,100 artists. Now, the entire staff of the Bop Stop has been furloughed, and there hasn't been a live concert open to the public since March 12.

"The only safe way we feel like we can offer live music is to keep the capacity of this space down to 15," Pollack said. "So the space is available to rent for that or for a socially distanced rehearsal space."

He added, "I don’t feel comfortable opening up as business as usual, even with our legal capacity of 38 with social distancing. It just doesn’t make sense."

Pollack said without a community space for people to gather, connections are lost, and so is an important piece of Cleveland's identity.

"Cleveland really prides itself on being a music city, so we’re a part of the fabric, the culture of this area, and we could just use your support so that we can continue to provide live music in Cleveland," Pollack said.

He noted that in addition to canceling live performances, because the Bop Stop is owned by a community school, "we haven’t been able to have masterclasses with our students, we haven’t been able to offer the same sorts of early childhood programming or music therapy. So we’re really losing a lot when we’re not able to operate."

Rebound Northeast Ohio News 5's initiative to help people through the financial impact of the coronavirus by offering one place to go for information on everything available to help and how to access it. We're providing resources on:

Getting Back to Work - Learn about the latest job openings, how to file for benefits and succeed in the job market.

Managing the Stress - Feeling isolated or frustrated? Learn ways to connect with people virtually, get counseling or manage your stress.

Doing What's Right - Keep track of the way people are spending your tax dollars and treating your community.

We're Open! Northeast Ohio is place created by News 5 to open us up to new ways of thinking, new ways of gathering and new ways of supporting each other.

Click here for a page with resources including a COVID-19 overview from the CDC, details on cases in Ohio, a timeline of Governor Mike DeWine's orders since the outbreak, coronavirus' impact on Northeast Ohio, and link to more information from the Ohio Department of Health, the Cuyahoga County Board of Health, the CDC and the WHO.

See data visualizations showing the impact of coronavirus in Ohio, including county-by-county maps, charts showing the spread of the disease, and more.

The CDC and the Ohio Department of Health are now recommending the use of cloth face coverings in public to slow the spread of COVID-19.

Read more about the CDC's recommendation here. Here is a step-by-step guide on how to make a face mask from common household materials, without having to know how to sew.