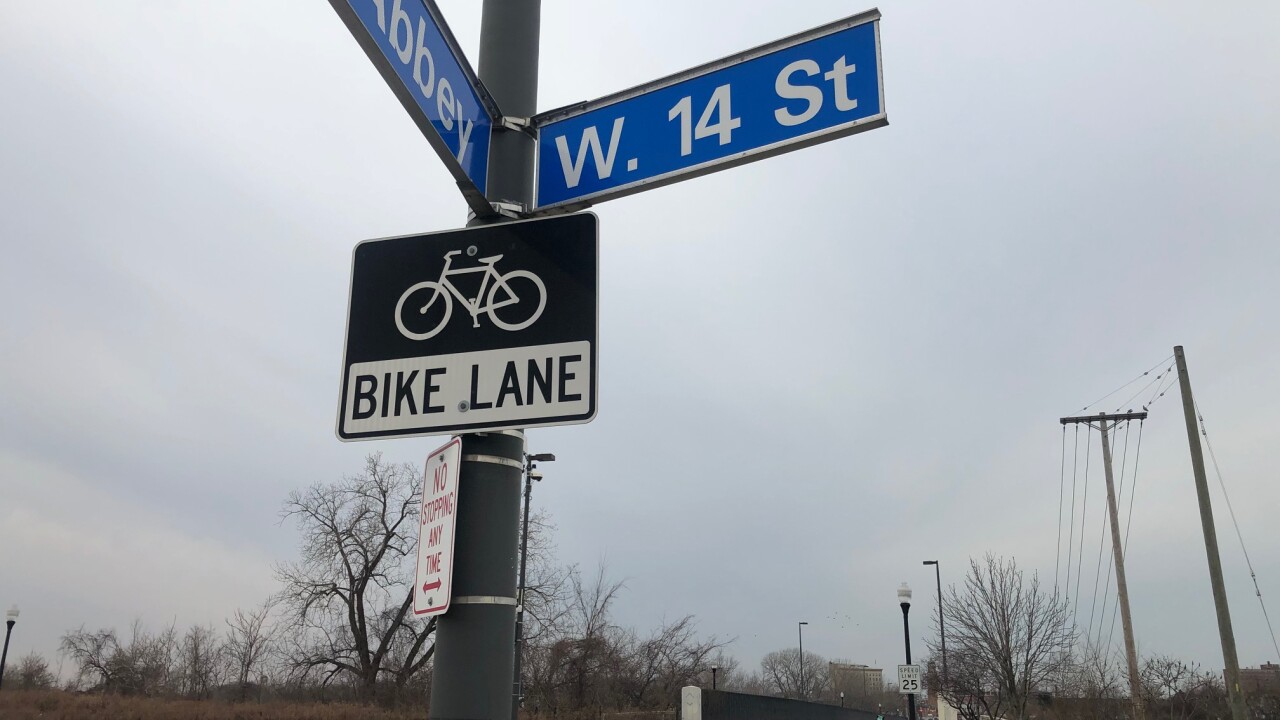 Advocates say unprotected bike lanes like the one along Abbey Avenue between Tremont and Ohio City aren&#39;t as effective as bike lanes protected with some kind of barrier.

CLEVELAND — Cyclists are running out of time to weigh in on two bike infrastructure projects in the City of Cleveland.

West 65th Street, from Denison to Herman Avenues — Feedback due by June 21

The City of Cleveland proposes a combination of “sharrows” and painted five or seven-foot bike lanes (depending on the location) running from Herman Avenue south to Denison Avenue.

What are cyclists already saying?

“While we appreciate that the plan includes a continuous bike lane from Denison to West Clinton, an on-street bike lane is a far cry from the 10ft off-road multipurpose trail that was in the 2013 [Transportation for Livable Communities Initiative (TLCI) program],” Bike Cleveland writes on it’s website.

Instead, Bike Cleveland proposes two-way cycle tracks, separated by a small curb for the entire length of West 65th Street. In areas where cars will be forces to drive through parts of the cycle-track, Bike Cleveland suggests the track be painted green to alert both cyclists and drivers to the intersection.

What will it connect?

This proposed work on West 65 Street will bring riders to the doorstep of Edgewater Park to the north less than 1.25 miles to the Cleveland Metropark Zoo to the south.

On the way, it will cross the busy intersection of Detroit and West 65 Street, with Blue Habanero, Brewnuts, and Gypsy Bean as well as Lorain Avenue, where the Michael Zone Recreation Center will eventually be connected to the Red Line Greenway. The Greenway will eventually provide a multi-use trail through Ohio City to the Flats, where riders can pick up the Centennial Lake Link Trail.

The City of Cleveland is holding a community meeting for input on a 3.2 mile resurfacing project along Union Avenue from Broadway Avenue and Kinsman Road.

The project will allow the city to repair curbs and curb ramps but proposed plans also show seven-foot painted bike lanes on each side of the street. Right now, there are two lanes of traffic and no painted bike lanes.

What are cyclists already saying?

“Reducing the bike lane width to 6 feet, and use the extra space to create a 2 foot painted buffer. Plastic posts between motor vehicle traffic and bike traffic can be added in the 2 foot buffer space,” Bike Cleveland writes on it’s website.

The City of Cleveland announced Monday that e-scooters and other shared mobility devices would be allowed back into the city this weekend.

The City says there were more than 213,000 rides during the six-month trial period.

Cleveland is requiring companies to sanitize the devices any time employees interact with them and riders are encouraged to wash their hands before and after rides and wipe down all parts of the device that they touch.

Bird is also offering a “Warm Up” mode, making it slightly easier for first-timers to ride.

The formerly-UHBike share program is supposed to relaunch soon as well with updated bikes now maintained by a company called HOPR.

Requests for information about a new title sponsor for the program have gone unanswered.

Have you ever driven, rode or walked by an open piece of land or a new construction project and wonder, “Hey…what’s going on there?”

Us, too. We love learning more about what shapes the space around us.

Next time you're wondering, send me an email at kevin.barry@wews.com and I'll look into it for a possible story on-air or online.