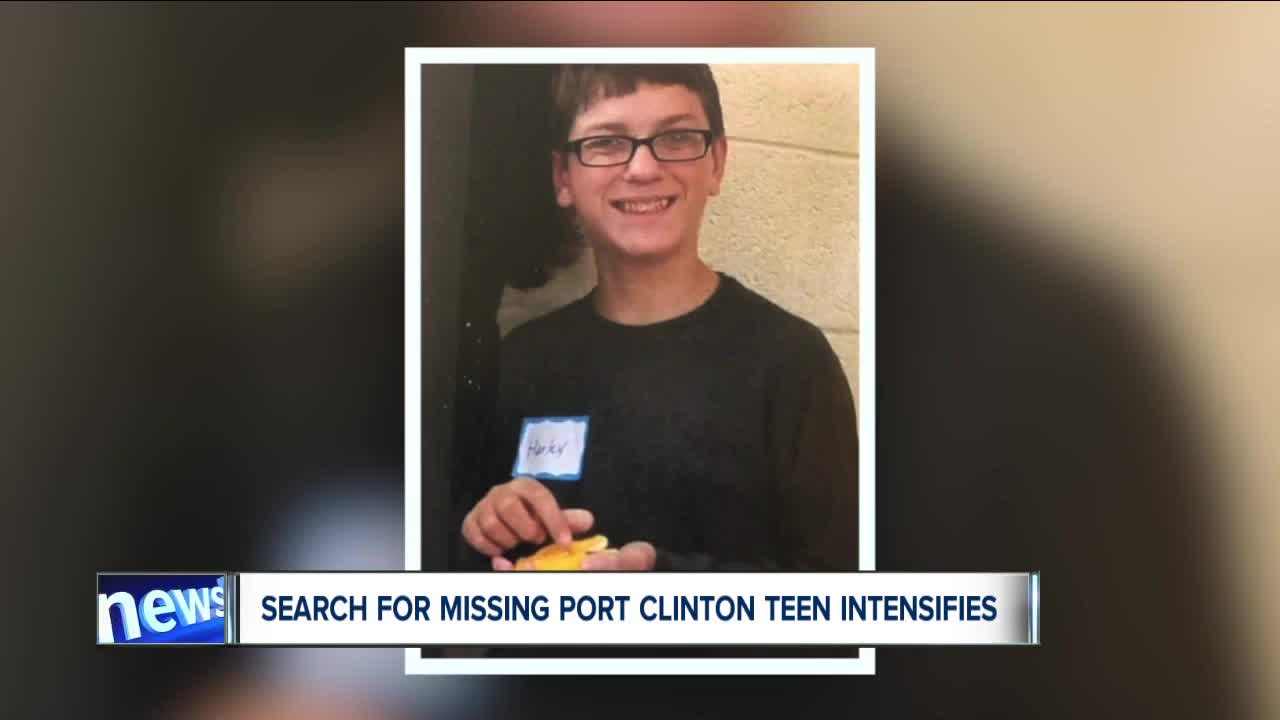 The search for a missing Port Clinton teen last seen walking to school last Friday is now nationwide. New missing posters with Harley Dilly's face on them were released Friday, with plans to distribute them across the United States.

PORT CLINTON, Ohio — The search for a missing Port Clinton teen last seen walking to school last Friday is now nationwide. New missing posters with Harley Dilly's face on them were released Friday, with plans to distribute them across the United States.

Friday afternoon, a steady stream of volunteers filed into Port Clinton's police department to pass out the flyers. By evening, about 2,000 of the missing posters were handed out.

"It struck a nerve with a lot of people," said Lorie Anderson. She along with her sister-in-law and niece knocked on doors and handed out the flyers with Dilly's face on them Friday.

"I pray everyday," she said. "I ask my kids to pray, family members to pray, everybody just pray that he gets brought home and he's safe."

Port Clinton's police chief confirmed the FBI and National Center for Missing and Exploited Children were now also involved in the search.

Chief Rob Hickman was tight-lipped about the investigation and wouldn't comment on any potential leads in the search for the high school freshman during a news conference Friday. He also didn't answer a question when asked if Dilly's disappearance was still being treated as an endangered runaway, as the chief said Thursday, or if it was now a criminal case.

"In my mind Harley is still alive and we want Harley to come home," said Hickman.

The chief asked residents to review home security recordings and look for any sign of Dilly or anything suspicious cameras may have captured.

He also asked homeowners in the area to leave their porch lights on.

"So we can get across to Harley, if you see a light on at a house at night, we don't want you to be scared," said Hickman. "We want you to go knock on the door and have them call the authorities from wherever they're at. Call 911 and they will in turn get someone headed your way so we can get you safely at home to mom and dad."

Previously Hickman said Dilly's parents were cooperating with investigators. When asked about it Friday the chief had no comment.

A search by air and ground Thursday covered more than 150 acres of farmland, woods, and shoreline, but found no sign of Dilly.

A $7,000 reward is being offered for information in the case, but the police chief said that total is expected to increase.

Meanwhile, the community waits for answers and hopes for the best.

"I've cried a lot, a lot of anxiety," said Anderson. "Knowing that he's out there and we don't know where he's at. We don't know if he's eaten, if he's cold. Anything."

The Dilly family released a statement Friday evening and police posted it on Facebook.

“We want to thank all the agencies and all the people from the community who have assisted in searching for our son Harley from now and through the holiday season. As you can imagine our family is terribly distraught at this time. This is not the Christmas wish we had hoped for. We pray for the safe return of our son, Harley. Harley if you hear/read this, please come home we missed you, your family miss you. You are not in trouble. We love you. Thank you one and all for the continued effort and work you are doing, and for all your thoughts and prayers. Pray, share, keep your eyes open.”

Port Clinton's police chief read the parent's statement during a news conference on Saturday. The chief said that he did not have any additional updates to share. He did not take any questions.