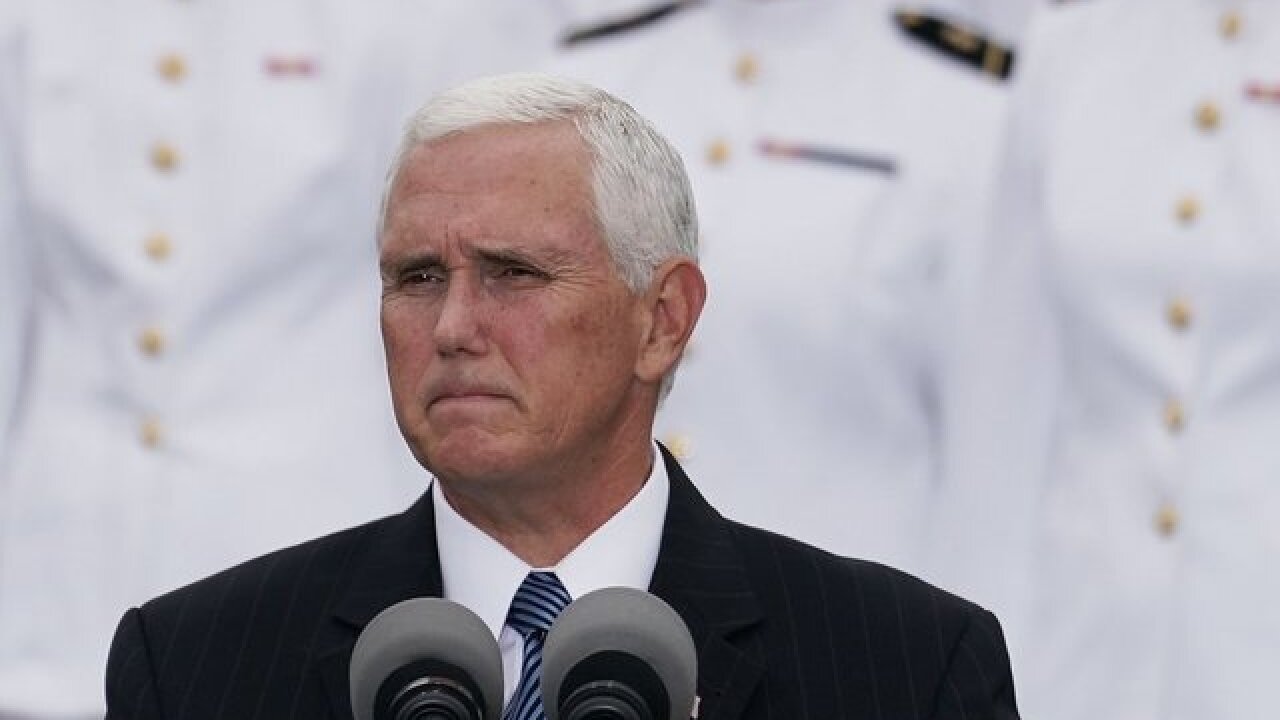 Vice President Mike Pence said Thursday that the US will not require North Korea to provide a full list of its nuclear and missile sites before President Donald Trump meets with dictator Kim Jong Un for a second summit slated for early next year.

Washington and Pyongyang have been locked in a diplomatic standoff for weeks over which side will make concessions first, but by relaxing its demands ahead of a second Trump-Kim summit, the US may have just blinked first.

Rather than requiring a declaration of nuclear weapons sites as a prerequisite to a second meeting with Trump, Pence  told NBC News  that the administration will insist on developing a "verifiable plan" to disclose those sites while the two leaders are in the same room.

"I think it will be absolutely imperative in this next summit that we come away with a plan for identifying all of the weapons in question, identifying all the development sites, allowing for inspections of the sites and the plan for dismantling nuclear weapons," he said during the interview.

State Department spokeswoman Heather Nauert said Thursday that the Trump administration's approach to dealing with North Korea will take time but bi-lateral engagement between the country's two leaders may be more likely to bring results than multilateral attempts of the past where negotiations became "bogged down" over disagreements where things "take a lot longer to get done."

"We take Chairman Kim at his word that he will work on this with us and when the President and Chairman Kim are next able to meet whenever that does take place, we think probably early in the next year, we expect those four elements of the Singapore summit will be addressed by the two leaders," she added.

That assessment comes as no surprise to American intelligence agencies which have long assessed that the North Koreans have stored much of their weapons capability, including mobile missile launchers, in underground mountain bunkers.

Trump claimed Tuesday that his administration is aware of the sites and that the images offered "nothing new - and nothing happening out of the normal."

But experts noted that the State Department's response to the report, which implored Kim to "follow through on his commitments -- including complete denuclearization and the elimination of ballistic missile programs" indicates that there is still a disconnect between the two sides.

Later on Thursday evening, the North Korean state-run Korean Central News Agency published a story stating that Kim visited the Academy of Defense Science facility in Pyongyang and "supervised a newly developed ultra modern tactical weapon test." The details of the weapon and the test could not independently be corroborated by CNN.

"North Korea is still building nuclear weapons. Kim is doing exactly the opposite," according to Bruce Bennett, a senior researcher who specializes in North Korea at the RAND Corporation.

Former Secretary of Defense Chuck Hagel said Monday that the images once again show that Trump's comments on North Korea have been a "fabrication."

"The North Koreans have not signed any document working out, laying out, what steps they are going to take to denuclearize," Hagel said. "There has been nothing stated, agreed to, framed signed, except what President Trump says they've said ... but now ... we have a whole different story, and it is the reality, it is not fantasy," he added.

While North Korea claims that it has taken some steps toward denuclearization, experts say those moves are largely cosmetic and easily reversible. Kim's regime has shuttered a missile engine testing facility; destroyed the entrances to its nuclear test site; and promised to close the Yongbyon nuclear facility, where North Korea is believed to produce fissile material for nuclear weapons, if Washington takes what it calls "corresponding measures."

Trump has insisted that he is "very happy with how it's going with North Korea," but US and foreign sources close to the talks have painted a starkly different image, describing a situation in which progress has been slowed by disagreements over sanctions relief and personal friction between working-level negotiators.

A source familiar with the ongoing dance between officials in Washington and Pyongyang said that North Korea's stance is that the US "must make a move before we make the next one."

For the time being however, Trump remains optimistic about the possibility achieving his administration's goal of achieving denuclearization, even if that means being flexible on certain demands in an effort to rebuild trust between the two sides.

"Certainly the administration is doing everything it can, within bounds, to get North Korea to trust them," Bennett told CNN. "But North Korea's terminology, what they are saying, is exactly the opposite, which makes it sound like what Kim is really trying to do is play the hard bargainer and extort as much as he can ... until the Americans decide (he is) not serious."

Pence's comments may indicate that the US is making a calculated attempt to break through that impasse, according to Adam Mount, senior fellow and director of the Defense Posture Project at the Federation of American Scientists.

"Though it clearly wasn't the US preference, setting aside a demand for a declaration is very much for the best," said Mount, who added that an inventory in itself would do little to address the nuclear threat from North Korea or add momentum to the talks.

"North Korea is clearly signaling it is not willing to rapidly dismantle its arsenal, but it may well agree to important limits on its capabilities. Rather than symbolic steps that hint at total disarmament, the US should lock in practical measures to limit the threat, especially agreed limits on reactors, missile tests and destabilizing military operations," he told CNN.

"The administration's experts understand that they cannot go into another summit without an agenda, a tangible deliverable, or a road map for future working level talks," Mount added.

Pyongyang has often argued it is unable to provide comprehensive details about the locations of its nuclear and missile sites because that could serve as a target list should the situation escalate into an armed conflict.

And the consensus among many North Korea watchers is Kim will likely never surrender a complete list of his nuclear and missile sites.

"It was asking to be lied to, and would have led to months or years of vicious arguments about its completeness," said Mount, about making a declaration of sites a prerequisite for a second summit.

"Every time the administration issues and then abandons an unrealistic demand, it loses some credibility and momentum," he said.

While dropping that demand as a prerequisite for a second summit may help jump-start the stalled talks, some argue that administration could be playing into Kim's hands by moving forward with a second Trump-Kim summit without a plan in place for how that meeting will help advance working-level discussions.

Lisa Collins, a fellow with the Korea Chair at CSIS, told CNN this week that "you can't get anywhere without these working-level talks because that's where the nitty-gritty stuff happens."

"You can't get a verifiable list of anything unless nuclear weapons experts are part of the process," she said."Is President Trump going to create a list of all those facilities? Does he even know where some of these places are? I would be very skeptical."

Bennett told CNN that he thinks that the administration is hoping to show they are open to a degree of compromise that will encourage the North Koreans will start to negotiate at the working-level again. If the North Koreans then still resist, US officials would likely use that reaction as evidence to convince Trump of their true intentions.

"If they do not, then that is a clear signal we can give to President Trump that they are not taking this all that seriously," he said, adding that message could also be interpreted as a personal affront to Trump and potentially prompt him to reconsider the upcoming summit.