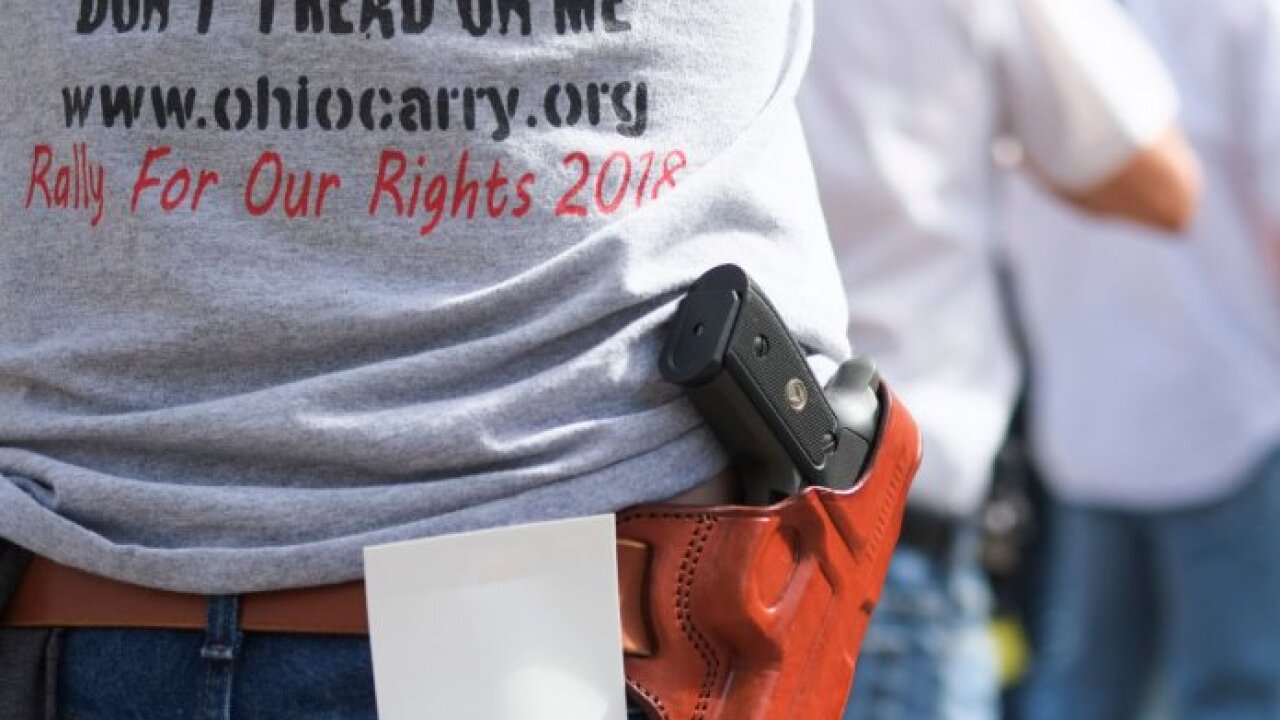 COLUMBUS, OH - SEPTEMBER 14: Gun owners and second amendment advocates gather at the Ohio State House to protest gun control legislation on September 14, 2019 in Columbus, Ohio. The group stood against red flag laws proposed by Ohio Governor Mike DeWine and national politicians in the wake of a wave of mass shootings throughout the U.S. (Photo by Matthew Hatcher/Getty Images)

With less than a month remaining in the legislative session, Gov. Mike DeWine’s gun policy response to the 2019 Dayton mass shooting, which killed nine and injured 27 more, could be all but doomed.

The last hearing on Senate Bill 221 in the Senate Government Oversight and Reform Committee was exactly one year ago Thursday. The legislative session ends Dec. 31.

The committee chairman, Sen. Bill Coley, R-Liberty Twp., estimated in an interview Wednesday it’s a “coin toss” whether the bill receives a committee vote, but it would take some significant revisions first.

“We have not been able to get language together that everybody agrees on,” he said.

“In its entirety? Maybe,” he said. “But there are pieces and parcels we can pull out to get something done.”

The legislation would increase penalties for felons convicted of new gun crimes; increase the penalties for knowingly providing a gun to a minor or someone who is legally prohibited from owning one; enable a voluntary background check system for private gun sales; and broaden the scope of information that law enforcement and court workers must submit into a federal background check system.

It would also expand a current legal mechanism that would allow a judge, upon request, to issue a “safety protection order” to a person with a drug, alcohol or other mental health problem. The order would allow law enforcement to temporarily seize this person’s firearms.

“It prevents gun violence, it doesn’t prevent anybody from owning a gun,” Dolan said. “It prevents somebody who is likely, because a court and a doctor has said they’re going to commit harm to themselves or others, that person should not have a gun.”

Dolan insisted it’s not “gun control” — a politically toxic phrase in a gun-friendly, Republican supermajority legislature — but a reasonable attempt to keep firearms from the wrong hands.

Senate President Larry Obhof, R-Medina, didn’t directly answer Wednesday what the plan is for the bill but referred to it as “problematic” as an overall package.

He didn’t respond when asked about the expanded private gun sale or safety protective order provisions.

“I’ll talk to the members about that as we have these broader discussions, but, I think all along, many of those suggestions faced an uphill battle in the legislature,” he said.

The Buckeye Firearms Association — the local gun lobby — immediately came out against the bill last year. Legal analysis from the group argues the voluntary background check will “become a de facto mandate” and the new penalties for gun crimes from people legally prohibited from owning one are “grossly inappropriate.”

Using his biweekly coronavirus press conferences as a platform, DeWine has repeatedly urged lawmakers to pass the bill, which he characterizes as a balance between keeping guns from people who shouldn’t have them and respecting gun owners’ Second Amendment rights.

His fellow Republicans in the legislature, however, have signaled intent to move in the opposite direction.

Later Wednesday afternoon, Coley’s committee held its first hearing on Senate Bill 383, the latest version of a “stand your ground” bill, which would expand the legal right to shoot to kill in perceived self-defense.

Current law says Ohioans who are out in public have a “duty to retreat” before responding to a perceived threat with force. SB 383 would remove that “duty to retreat” in any place a person is lawfully occupying.

A House committee is scheduled to take up another “duty to retreat” bill Thursday morning.

When the new session begins next year, Dolan would have to introduce the bill anew, which he said he intents to do.

Dayton Mayor Nan Whaley, a Democrat, served as the city became the second site of mass gun violence in America in a 24-hour period in August 2019.

She stood with DeWine and Dolan as they announced SB 221 and expressed no surprise that its chances of becoming law are fading. She criticized the “extreme, broken legislature” for shirking gun restrictions after an armed attack.

“It was a pretty watered-down bill to begin with,” Whaley said. “The fact that the legislature doesn’t really care about mass shootings or do anything about them is disappointing.”

Dayton, along with Columbus, accused the state government in a lawsuit last month of a “continuing and dangerous failure” to report criminal convictions to the federal background check system, leaving the door open for felons to procure firearms.

Dan Tierney, a DeWine spokesman, said the administration will continue to advocate and work with the General Assembly on the Strong Ohio package.

RELATED: Activists on both sides of gun issue wait for action from Biden administration