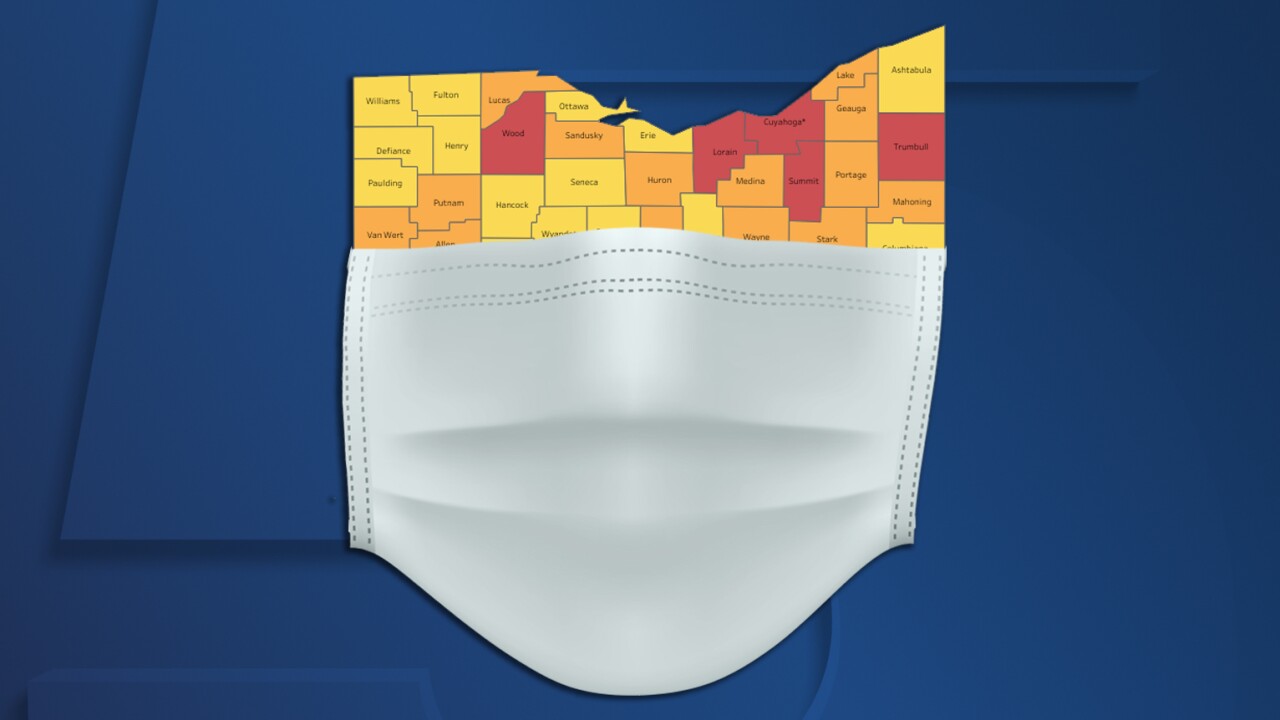 COLUMBUS, Ohio — Amid a continued rise in COVID-19 cases and hospitalizations across the state of Ohio, Gov. Mike DeWine announced Wednesday that a statewide mask mandate will go into effect beginning Thursday at 6 p.m.

The mandate follows similar guidelines as the county-level mask mandates that have been issued in parts of the state that were deemed a Level 3 or above COVID-19 risk under the Public Health Advisory System established by the Ohio Department of Health earlier this month.

All Ohioans are now required to wear a face mask or covering in indoor public spaces and outdoors when unable to maintain a 6-foot distance from others. There are exceptions for children under 10, those with medical conditions that would preclude the wearing of a mask, and in other situations where wearing a mask would be unfeasible. Read the full public health order pertaining to Level 3 counties here, and an addendum to the face mask mandate here.

The announcement comes a day after an unexpected about-face by President Trump during the first White House Coronavirus Task Force meeting he’s attended since April, during which the president recommended face masks and called them “patriotic.”

Dr. Claudia Hoyen, who is the director of infection control at Rainbow Babies & Children's Hospital and MacDonald Women's Hospital, as well as the co-director for the University Hospitals Health System, said the mask mandate will help control COVID-19 spread.

"We're doing this to keep ourselves safe so that we can go on," Hoyen said.

Hoyen said the mandate will allow places to remain open and safe.

"If this pandemic continues like this, you know, for as many people as aren't wearing masks, there will be so much more economic devastation," Hoyen said.

She said that other countries, where people have more consistently worn masks, have "had greater success than we have in terms of being able to control the spread."

"I think that we should look to the science that we're seeing from other countries and feel comfortable at applying it at this point to really help ourselves be able to contain the spread some more," Hoyen said.

Hoyen noted that even though it can feel awkward, it's "critical" for people to "do the right thing and wear a mask when they're out in public, or even if they're not with people in their immediate family."

Hoyen also added that a mandate helps people on the front line, such as grocery store workers and retail clerks, because if it's not mandated, "it puts them in an awkward position to have to kind of advocate for their own safety."

She said she views mask-wearing as a new social norm.

"At a point in my childhood, I was bouncing around in the back of a station wagon with no seatbelts because that is what we did," Hoyen said. "I would have never thought when I had children in the '90s to allow them without a seatbelt."

She added, "It's a new juncture. And it's, again, something that we now have evidence to show it works, and so let's use that evidence. And let's put this in the category with bike helmets and motorcycle helmets and seatbelts."