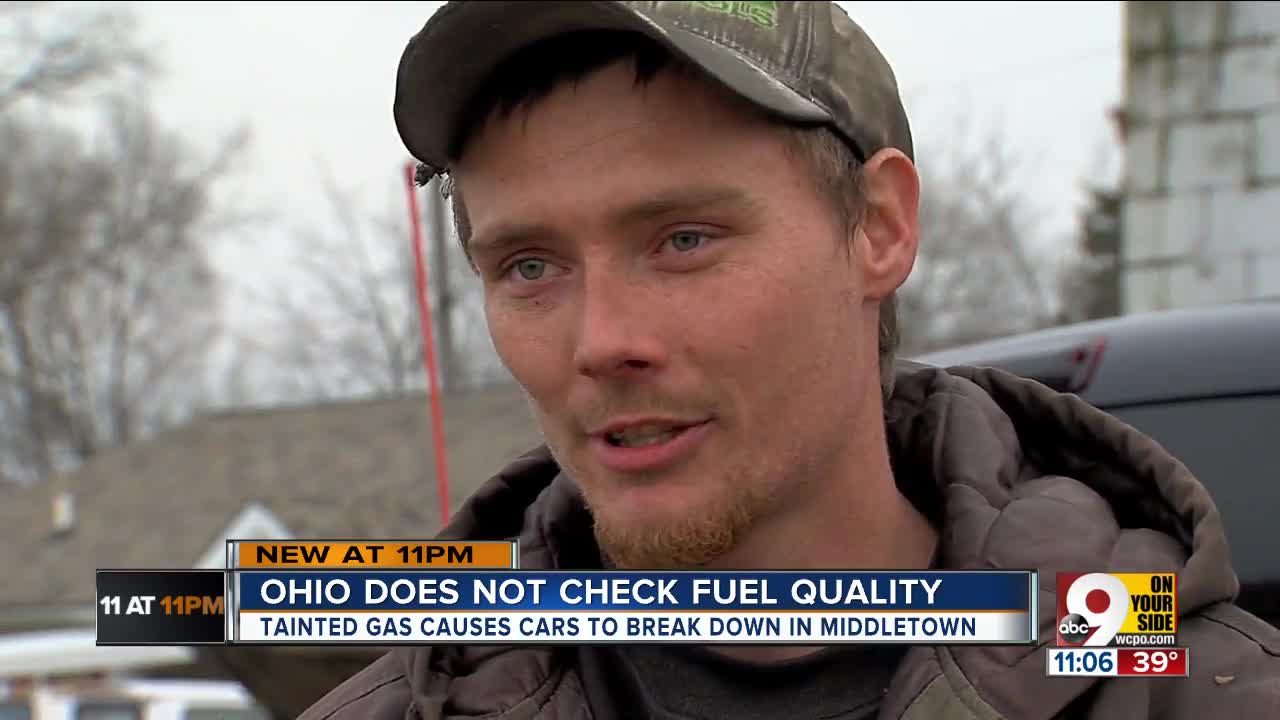 A $9 gas purchase from the Madison Food Mart Shell station cost Andrew Carpenter $505.89 by the end of Wednesday. He and four other customers, including a U.S. Postal Service truck, bought gas that had been tainted with water and caused their cars to break down almost immediately.

HAMILTON, Ohio — A $9 gas purchase from the Madison Food Mart Shell station cost Andrew Carpenter $505.89 by the end of Wednesday. He and four other customers, including a U.S. Postal Service truck, bought gas that had been tainted with water and caused their cars to break down almost immediately.

All had used the same Shell. The USPS truck didn’t even make it to the end of the parking lot.

“Coming up the road, my truck started spitting and sputtering,” Carpenter said of his own experience. “I’d just put $9 in, and it acted like it was running out of gas, which I knew it wasn’t.”

It cost $290 to pump the water out of his 2006 Chevy, then hundreds of dollars more to have it towed and the fuel pump replaced.

On Thursday, police ordered the Shell station to bag all of its pumps pending further investigation.

"Just a few months ago, we found roughly 3 feet of water and sediment mixed in with the fuel in a fuel tank at a Sunoco in West Chester," he said.

Now Reynolds is calling for state agriculture officials to implement a uniform fuel quality testing program in Ohio, where none currently exists. Ohio numbers among just a few states without such a program.

"How many more vehicles are we going to see damaged because of no action on fuel quality testing in this state?" Reynolds said. "If the department of agriculture is not going to do the job, give local county auditors the authority to test and we'll reduce the number of vehicles damaged."

Brett Gates, the deputy communications director for the Ohio Department of Agriculture, said the state has "never developed fuel quality standards," so it has never been able to test for quality because there isn't a standard to measure.

Reynolds' announcement came the same day that Gov. Mike DeWine's administration announced its recommendation to increase the state gas tax by 18 cents per gallon. The revenue from the tax would be split between the Ohio Department of Transportation and local governments, according to ODOT officials.

Reynolds said he has spoken to several state lawmakers who have expressed interest in addressing the fuel quality issue.

"I don't know how a single state representative can support a proposed gas tax increase without an accompanying measure that provides assurances on fuel quality for Ohio's gas consumers," he said. "I'm hopeful new legislation will be introduced soon."