How Ohio has responded to COVID-19: Part One 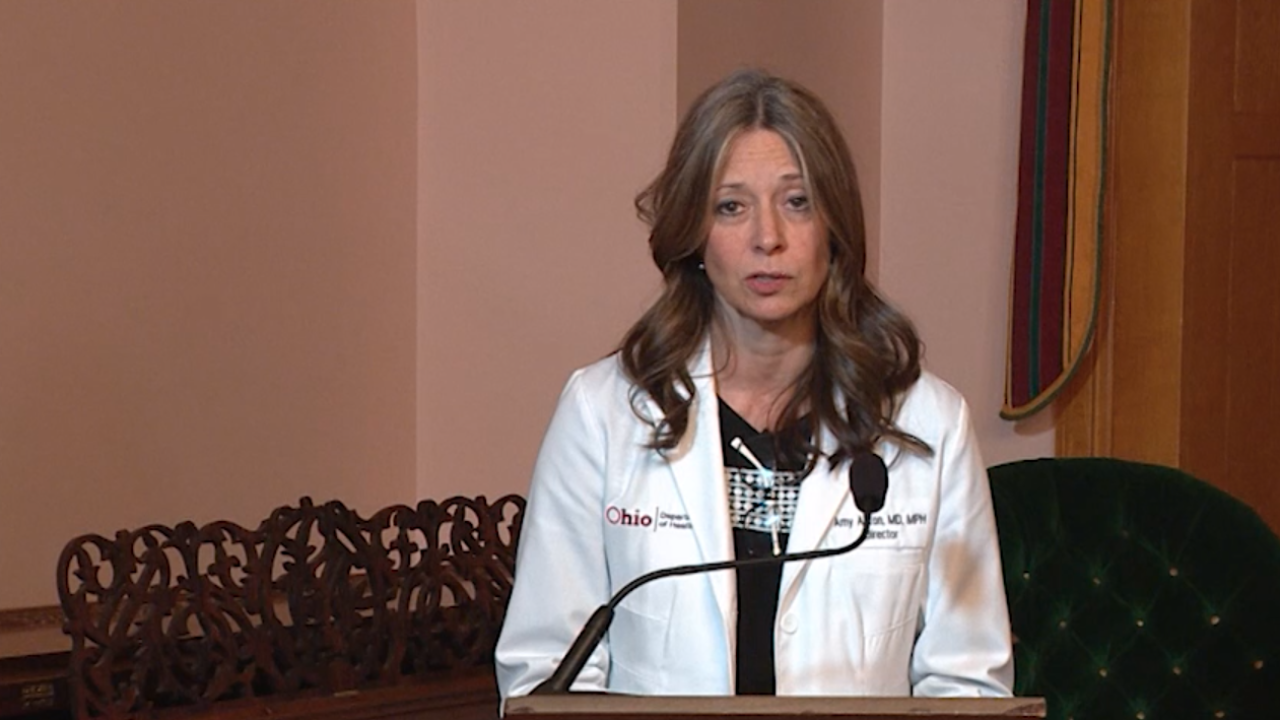 Dr. Amy Acton explains the state&#39;s Stay at Home order during a news conference on Sunday.

The star of Ohio’s first coronavirus press conference wasn’t the state health director who would eventually have a bobblehead made in her honor. Nor was it the governor, who would soon enjoy soaring approval ratings for his handling of the pandemic.

Actually, the star was the bodybuilding former governor of California. Calling in from his home in Los Angeles, the man once named Mr. Universe offered a muscular defense of the decision made to postpone most of the Arnold Sports Festival.

The annual fitness exposition was set to begin the next day. Athletes and spectators from around the globe were on their way to Columbus just as the new coronavirus was beginning to spread across the United States. The state of Washington had already reported six deaths. New York City, which would soon become one of the world’s biggest hot spots for the virus, reported its first few cases.

The date was March 3. No Ohioan had tested positive for COVID-19 to that point. Still, the decision was made by Gov. Mike DeWine, festival organizers and local health officials to cancel the popular trade expo and prohibit spectators from watching most of the athletic competitions.

This was a shocking decision, given the absence of coronavirus cases here and that the festival contributes to more than $50 million in economic activity each year. Lt. Gov. Jon Husted would later say even he questioned the move at the time but soon realized what a smart decision it was.

In a room packed with reporters, DeWine explained the postponement was a preventative measure to keep the virus from entering Columbus and spreading through town. Few in the room could have anticipated the health impacts and economic devastation that would follow in the months ahead, with more than 2,000 Ohioans now dead and 1.2 million having applied for unemployment.

The main questions on the minds of reporters inside the Ohio Statehouse during that first press conference understandably dealt with the sudden postponement of an iconic festival. What about the athletes that had trained all year for this? What about ticket holders who already paid good money to watch them?

Nearly three months later, Ohio is now entering the reopening phase in response to COVID-19. Most businesses have been allowed to reopen. The state has issued a swath of health mandates and guidelines for everything from training gyms to restaurant dining rooms.

This article is the first in a new series from the Ohio Capital Journal looking back at some of the initial press conferences held in regard to the virus. The purpose is to provide a fair, measured reflection on some of the early decisions, statements and predictions made by state officials.

The first thing you notice when rewatching this initial COVID-19 press conference is the set-up. DeWine is seen at the microphone with a row of officials behind him: Columbus Mayor Andrew Ginther, Ohio Department of Health Director Dr. Amy Acton and Columbus Health Commissioner Dr. Mysheika Roberts.

There is no distancing and no masks. In front of them is a room full of reporters with little space between them. Safety guidelines which would become commonplace in later weeks had not yet been implemented in the United States.

“We are all concerned of the spread of the coronavirus, now known as COVID-19,” DeWine began.

DeWine explained that the Arnold festival’s trade show would be canceled. The athletic competitions would continue, though spectators would not be allowed inside except for during the event finals.

From there, DeWine introduced Schwarzenegger via speakerphone. The former governor said the decision was about prioritizing health and safety over money.

Schwarzenegger said he is no stranger to emergencies, having dealt with wildfires as a resident and governor of California.

“We have gone through crisis here,” he said, concluding his call with a signature phrase:

Video Player00:0000:18Testing was very limited this early in the pandemic. DeWine said there was one person being investigated by the Centers for Disease Control and Prevention:

Mayor Ginther spoke briefly after the governor, saying this would have a major financial impact on Columbus but that safety would stay a top priority. Following Ginther at the podium was an official who would go on to be a household name, but at that point was a relatively obscure member of DeWine’s cabinet.

She had to fully introduce herself.

“Good evening, everyone. I’m Dr. Amy Acton, the director of the Ohio Department of Health.”

Acton said the administration was committed to telling the public “what we know, when we know it.” The administration has largely stuck to that promise, hosting near-daily press conferences since then.

Though Ohio had zero confirmed cases to that point, Acton warned those present that it would only be a matter of time.

Acton concluded by telling Ohioans to stay home when sick and cough into their arms. Again, this was prior to CDC guidance about masks and social distancing, which would come in the weeks to follow.

Dr. Roberts then spoke about monitoring athletes flying in from around the world by screening them at the airport. She said the Arnold was barring participants from China, Iran, South Korea, Japan and Italy. (The United States has since surpassed all five in COVID-19 deaths.)

It was asked what would happen if an athlete showed symptoms for COVID-19 and how testing would take place.

Toward the end of the press conference, DeWine was asked if his decision regarding the Arnold Sports Festival might send a message to other state leaders around the country. Here was the governor’s answer:

DeWine would be back at the Ohio Statehouse two days later for a “Governor’s Summit on COVID-19 Preparedness.” Within weeks, the primary election would be postponed, schools would be dismissed and a stay-at-home order would be enforced for all Ohioans.

On March 3, that grim reality was still unknown to state officials, reporters and Ohio citizens. It was also unknown to the White House.

“Several hours ago, I talked to (Vice President Mike Pence),” DeWine said. “He confirmed to me and assured me, that based on high level briefings that he participated in today, the risk for the disease remains low.”

“However,” the governor added, “we must continue to act with an abundance of caution.”