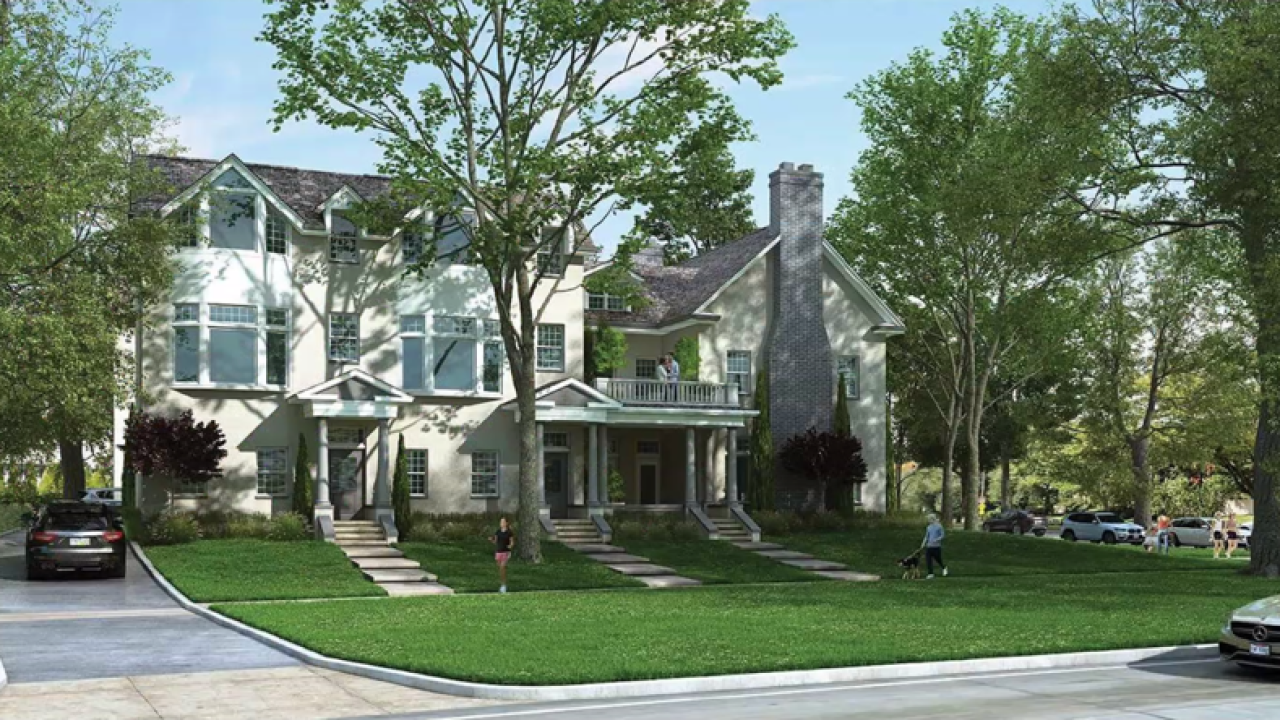 Brickhaus Partners
Renderings show how the new townhomes would sit on West Boulevard with Clifton to the right.

Plans for four townhomes on Tillman Avenue between West 49th and 54th Streets in Gordon Square were received well by the Cleveland Landmarks Commission during a conceptual presentation Thursday.

The land is currently vacant but is next to a used car lot.

Cleveland City Council member Matt Zone told the Commission that there have been townhome projects proposed in the past for the site but had tried to fit in many more homes.

“I’ve been the councilman now 19 years, I’ve really tried to make sure we have the right scale development on the site,” said Councilman Zone, who is resigning from City Council to become the Executive Director of the Thriving Communities Institute and will also serve as Senior Vice President of Western Reserve Land Conservancy.

A proposed plan for new commercial space and townhomes along Lorain Avenue is on hold while developers and the neighborhood work through how to handle the building currently in that space.

The building at 4500 Lorain Avenue has been there since the late 1800’s and currently houses a barbershop but has had scaffolding along the sidewalk to prevent bricks from hitting pedestrians. The owner says the facade is bowing beyond repair while community members, including Cleveland City Council member Kerry McCormack says the building should be saved.

The Cleveland Landmarks Commission tabled an application to demolish the building Thursday, waiting for more information from the owner.

The proposed project would create a two-story building on the corner of Lorain and West 45th Street that would line up with Forest City Shuffleboard next-door.

Three-story townhomes would sit along West 45th Street behind the commercial building with parking on the bottom and a roof terrace.

Brickhaus Partners’ roughly $3 million plan for five townhomes with parking in a structure that looks like one large home on the prominent Cleveland corner got Landmarks Commission approval.

The project would be on a large grass plot on the corner of Clifton Boulevard and West Boulevard.

Brickhaus' Andrew Brickman told the Commission the project might eventually need variances related to the setbacks and multifamily plans. He said the project will mostly be built while keeping many of the trees in place, except for two maple trees along Clifton Boulevard.

The City of Lakewood’s twitter account said building permits have been conditionally approved for four homes on the former Marathon gas station site on Lake Avenue in Lakewood.

WXZ Development has started work at the former Marathon Gas site on Lake Avenue. Building permits have been conditionally approved by the City for the construction of four new homes. Contractors are currently filling and grading the site. Utility work is up next. pic.twitter.com/sWZ6DbLH3i

Intro developer Dan Whalen tweeted that the timber for what will be America’s tallest timber-frame building has left Amsterdam for the Port of Cleveland.

The nine-story, $150 million project will bring 298 apartments with 10 “ultra-luxury” units right across the street from the West Side Market. The 36,000 square feet of retail space along with a wedding venue on the top of the building will bring new life and much more density to Ohio City.

Whalen says the timber could start to be put in place before the end of 2020 and could be open in 2022.

Cleveland City Council approved the Temporary Expansion Area Program to continue until June 1, 2021 with plans to extend the program again until November 1, 2021.

The program was created in June, 2020 to help bars and restaurants serve more customers while keeping them socially distanced by using outdoor parking lots, spaces, and public right-of-ways.

Council member Kerry McCormack says he’s working with Mayor Frank Jackson’s Administration to not only streamline the process to put up tents and heaters and apply for grant money that could allow businesses to get financial assistance to purchase those materials.